Some of the more conscientious readers out there may wonder why Subway’s five-dollar foot long isn’t on our five-dollar meal to-do list. My immediate response is that it’s just not sexy. Look at Jared. He may be healthy, but he’s also kind of creepy. Subway is for those people who don’t want to feel guilty after eating. This is not an experiment on what’s the healthiest thing to do with five bucks. If you go into a fast food place expecting every brick of the food pyramid to be appropriately represented, then you’re kind of missing the point. Also, and I know I have some friends out there who feel me on this, in Subway’s commercials, their guacamole sandwiches look like they’re suffocated in guacamole, and then when you actually get there, they give you half a tablespoon of guac. Fuck Subway. This juicy bit of bloggorhea is about finding out what these huge corporate food vendors think five bucks is worth, and how they entice us into spending that money. And it’s also an opportunity to make poop jokes.

With that in mind, this adventure in fast food gastronomy has to end on a grand note. My final stop has, what I believe to be, the most intriguing name and the clearest target market. 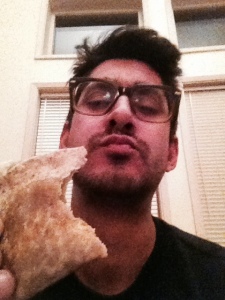 A lot of caveats have to be made to accept Jack in the Box in this experiment. J in the B’s meal can’t really be called a lunch deal because you can only get it from 9 PM to 5 AM. Most people who want to eat a sandwich, fries, curly fries and two tacos during this time period are likely high or drunk as fuck. I feel like Jack is counting on this because this deal is called the “Late Night Munchie Meal.” Sober people don’t usually refer to their feeling of hunger as “munchies.” This presents some sticky ethics because by 9PM the only option you have if you want to eat at this place is going through the drive thru. They’re basically saying, “Hey drunk and high people, it’s late at night, why not hop into your cars and drive over to the Jack in the Box?” Maybe it’s implied that you need a designated driver to take you there, but they should put a “friends don’t let friends…” tagline at the end of their commercials, just to be safe. This could be a nationwide sting operation to arrest people for DUI’s, or maybe it’s just a corporate service for people who get hungry late at night, I can’t be sure. The other important issue with the Late Night Munchie Meal is that it costs six bucks, $6.48 with tax. Jack in the Box is betting that whatever state of mind you’re in, at this point you don’t really care about how much a box full of tacos, burgers, and fries costs. That’s probably a safe bet.

For it being late night in a college town, the drive thru is surprisingly empty. I would say I tried my best to put myself in the right frame of mind to fully appreciate this deal, but it’s really not that hard to get drunk, and though I have a designated driver, I know I’m not as messed up as I should be to enjoy this. I have enough wherewithal to notice that the Munchie menu is ridiculous. There’s a Chick-N-Tater Melt, Hella-Peño Burger, Loaded Nuggets, and a Stacked Grilled Cheeseburger. Some of the names are pretty awesome; the nuggets do look totally loaded. As I mentioned, each meal comes with a set of Jack’s famous 99 cent tacos, a small fry, a small curly fry, and a drink. Jack in the Box’s prices are close to Dairy Queen’s when it comes to their combo meals. It would seem that the Late Night Munchie Meal cuts the customer a bit of a break.

Upon the recommendation of IT supporter Matt Hiltachk, a fellow son of Nor-Cal, I order the Hella-Peño Burger. It comes with stuffed jalapenos and regular jalapenos. There are hella peños, bro. It’s smothered in melted cheese, and it’s a total mess when I unwrap it. I have to say, the Late Night Munchie meal has the best packaging of any deal I’ve had so far. It comes in a jazzy purple box and on the inside of the lid there is a tic-tac-toe board. I really wish I was plastered for this. I know I would be using the word “genius” to describe the conceptualization of this box. When the Hella-Peño burger is gone, I feel like I’ve eaten ten pounds. I swiftly move to the fries, and I’d say that combined it’s a medium serving-size. By the time I move to the tacos, my munchies are pretty much satisfied. It’s the first time I’ve ever had these tacos, and it’s a chore getting through them. Taste-wise, they’re not awful- the shell tastes more similar to a Jimboy’s than a T-Bell, and the meat is no worse than Del Taco. At 99 cents, two tacos are a bargain, but as part of this meal, I think they’re thrown in there just for the novelty. The two styles of fries and the tacos probably give this thing the six dollar price tag, and if it included only one or the other, it would make kind of a lame $5 deal.

Eating a Munchie Meal past 10 PM when you’re not smashed and in immediate need of something spongy to soak up alcohol is kind of difficult. This is more true if you had enchiladas for dinner beforehand. I don’t know what to blame, but I am bloated and gassy until morning. It’s a rough night’s sleep, but I don’t wake up once with the urgent need to expel my guts, though I did experience some unfriendly odors. I think Jack in the Box’s Late Night Munchie Meal is the perfect prescription for someone with a fierce case of the munchies, but I wouldn’t say it’s the best out of everything out there.

Presentation: 3/3 – The box had a spot for each dish and it came with a game. Super sexy.

Satisfaction: 2.5/3 – Depending on who you are, the timeframe for this dish may be convenient or a hindrance. Having to wait till late night to play a dollar more for a deal seems kind of silly to me.

Value: 2.5 – It’s more expensive than most other deals, and I don’t think the portion of fries and the addition of already dirt cheap tacos makes this thing very special. Nonetheless, it fills you up.

T + 3 hours: 3/3 – Even after I ate Mexican food for dinner, this stuff stuck inside me for a good nine hours. Maybe it’s just me, but that’s impressive.

I hope you’ve had as much fun reading this stuff as I’ve had eating it. Bon apetit.