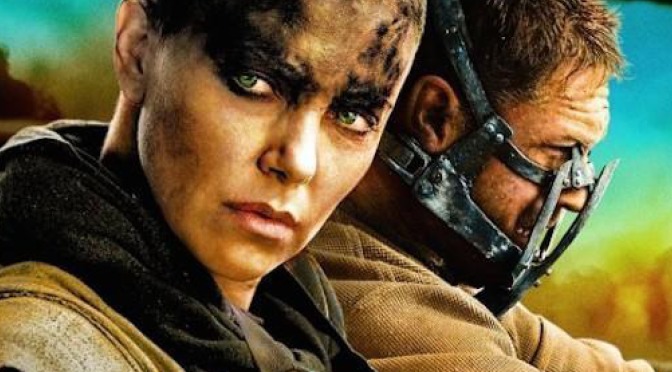 Before I even begin, I have to say how insane it is that MAD MAX FURY ROAD is an OSCAR NOMINATED BEST PICTURE. Never thought I’d ever type that or for that matter even GET another Mad Max movie from George Miller, writer/director of the three previous films.

The nomination is both completely deserving and impressive coming from the notoriously cantankerous closed-minded Academy. I’m glad that they managed to see the extreme craft of a movie that features a man getting his jaw pulled off via a chain tied to a moving wheel. While that sounds like sarcasm, I am dead serious about the movie using the kind of thoughtful craft and storytelling only possible in cinema. 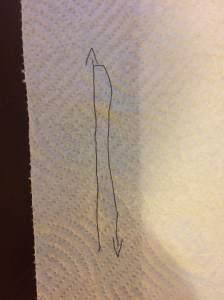 I stress the storytelling in the movie because the plot of the movie is so simple it can be drawn on a napkin. In a post-apocalyptic Australia where resources are scarce, Max (Tom Hardy) is captured by an evil warlord named Immortan Joe (Hugh Keays-Bryne) who subjects his people to scant necessities and takes the women for himself in order to procreate. One of Joe’s lieutenants (Imperators), Furiosa (Charlize Theron), takes it upon herself to help the wives escape while Max reluctantly helps them in order to further his own need for survival. With that, one movie-long chase sequence begins and never stops.

What elevates the movie to heights above the horde of nominees and movies made in general nowadays is the commitment to storytelling through movement/action. For modern movies, the magic aspect of being able to see a subject react in real time to the environment is often neglected or flat out ignored. What usually happens is one of the following : other characters reveal a person’s secret to another party; voiceovers reveal their personalities; or worst of all, characters say out loud how they feel instead of using the greatest tool of the medium: pure visual storytelling.

George Miller, his cinematographer Joe Seale, and all the actors put enough careful consideration into every step and breath that it rivals a Bubsy Berkeley musical. Since the screenplay is so sparse on dialogue, these actions breathe life and make everyone extremely well rounded. Each fight and action set piece has an added weight. Hell, I didn’t even know most of the character’s names the first time around but I sure as hell knew what kind of person they were and that is beyond impressive.

Case in point, the scene in which Max meets Furiosa and the escaped wives is almost wordless except for Max grunting out, “Water.” Without words, the viewer sees the strengths of wives in the way each one reacts to Max. One looks back to Furiosa, one continues to free herself from her chains, one tries to bring Max the water herself to protect the others, one looks at the hidden gun on the truck, and the final woman clutches her pregnant stomach. All of that takes place in a single shot. I could not believe how well Miller utilizes the camera and understands how much more powerful it is to see this kind of narrative. These macrodetails are insane and really do insist upon multiple viewings of the film.

While Tom Hardy does a fantastic job as Max, the real growth and character meat comes from Charlize Theron’s performance as Furiosa. As astounding to me that this film is nominated for Best Picture, it is even more outrageous and utter bullshit that Charlize isn’t nominated for best actress when this movie is so clearly based on her performance.

Furiosa and the role of other women also push the film into a very pro-feminist message through the lens of a violent car chase flick, the ultimate form to tackle a social justice issue. The whole crux of the film is that Immortan Joe’s wives escape because they are living by their new motto, “We are not things.” The movie reinforces this belief constantly by showing each woman as an articulated real person, an idea not used in most action films and, even more horrifyingly, not used in many other mainstream films. The protagonists are, for the vast majority, female, and are not reliant on men. Instead they will shoot an arrow through your damn neck to showcase their power.

In one of the film’s most telling moments, Max is trying to use a sniper rifle to get a shot off on an approaching figure in the darkness. He fires twice and misses each time while Furiosa lurks behind him in the shot. Having enough of this, she grabs the rifle and asks Max to literally be her prop to get the shot off. She does it calmly and without any second guessing. There is no discussion about this being amazing because she is a woman or anything like that. A simple nod of respect and acceptance of his place comes from Max. It’s a beautiful simple moment that again is near silent and accomplishes so much and more.

All of these feats also owe a great credit to the incredible set design and practical effects throughout the film. Nearly everything you see on the screen is actually there. Most of the CGI was used to remove wires and other safety precautions. Everything in the movie is tangible and it comes across at every moment. You are tense and scared for all these characters because the danger really is there and it blows away the CGI of other films. Give me the return to the days of real effects because this and a couple of other movies this year (looking at you Furious 7) fill that void in my heart.

I’m still in disbelief on every aspect of this movie and I can’t tell you how happy I am for its existence. I desperately hope this continues a trend of making movies with the consideration this movie does. Give me the prestige drama that actually believes in making a movie using the power of film. All the tools are there and Mad Max shows how big of an impact they make.