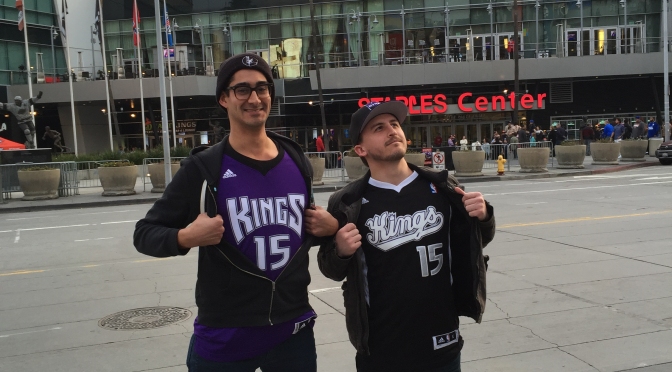 The best of both worlds: they say you don’t get to have your cake and eat it, too. But sometimes, rarely (or in this case, four times an NBA season), I get to do both. And very rarely, yet appropriately, does it happen on my birthday. Well, that’s exactly what happened on January 16th, when I turned twenty-nine while attending my first game at the Staples Center with my good friend, Kevin Hayes, watching our Sacramento Kings play my LA Clippers.

Now, I admit I’m a Clippers (Blake Griffin) fan, but with my friend visiting and Blake being injured, it felt right to join Kev in Kings colors. With my favorite teams competing head-to head, I’m usually happy no matter the outcome, but this season is huge for the Kings. With the addition of Rajon Rondo, Marco Bellinelli and Willie Cauley-Stein, plus outstanding performances by Omri Casspi, and the league’s best big, Demarcus Cousins, the Kings have a shot at the 8th seed for our first playoff appearance in ten years (yeah, that’s cause to celebrate!) Granted, it means besting either Portland or Houston (which will be tough), but if the Warriors’ rise has taught us anything it’s that you have to believe. For playoff consideration, every Kings win counts. 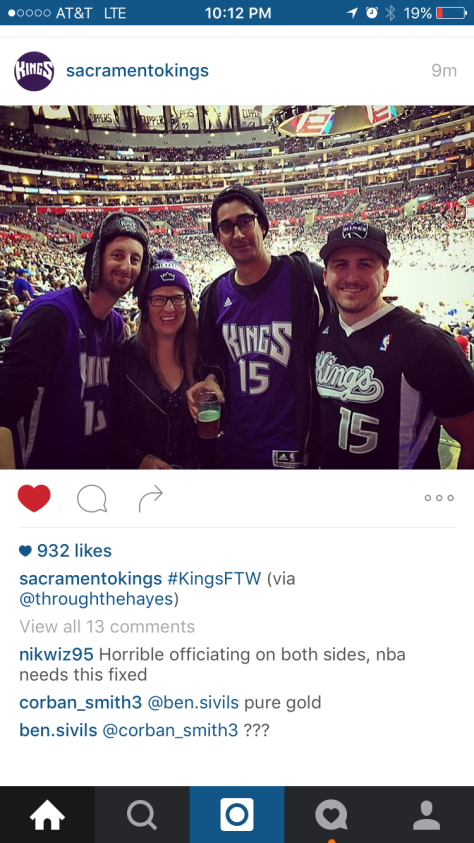 The Staples Center is part of this huge entertainment complex called L.A. Live. It’s two square blocks stacked with restaurants and event space. It was brimming and the air was electrified by all the commerce, excitement, and chatter. With all the indistinct voices and sounds of traffic, it felt a bit like Mos Eisley, but probably easier on the scum and villainy. That, however, may depend on how you feel about the Wolfgang Puck Experience, so I dunno.

Through the grace of Kevin’s social media presence, we got hooked up by an old friend who works at one of the hotels in the L.A. Live. While we were waiting for her in the lobby, Kev and I were surprised to see Quincy Acy on his way to the game. We walked over to him, and he shook our hands politely before heading off. We were visibly excited, probably more than we needed to be for meeting the back-up power forward/center. How could this get any better? Shortly after, Caron Butler strode through the lobby, and I just couldn’t believe how lucky we were! Sacramento hasn’t used Butler since acquiring him, but I have a fondness for Caron. He was on the Clippers when I first started following them, and his run with Antawn Jamison and Gilbert Arenas on the Washington Wizards is referenced in one of my favorite George Pellecanos books. Anyway, I approached him, told him thanks for coming to Sac, and we shook hands. Kev and I both thought that it was now inevitable that we would meet the stars of the team. Maybe Boogie. Maybe Rondo. Unfortunately, we must have been drooling at the mouth, because Omri Casspi and Rudy Gay each came down, saw us, and immediately changed direction. A tad disheartened, we decided not to push our luck and moved along. Acy and Butler had already blown our expectations, and it was a good omen for the night. 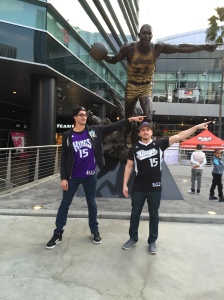 Now it could have been the booze, but there is something very moving about the monumental nature of the Staples Center. Statues of LA legends adorn the Star Plaza, a promenade at the arena’s entrance. There’s Magic Johnson, Jerry West, Kareem Abdul-Jabar, Wayne Gretzky – men who never played in the arena, but whose bronzed likenesses bestow the power of their legends, an aura of victory, over the current stadium. I felt a reverence for the building, an appreciation for how much LA is a part of sports history. Then Kev and I took some selfies with the statues and headed inside for beers.

Our seats were close behind the Clippers tunnel, and the arena pulsated red, white, and blue lights and shook from the bass, a constant noise among the rise and fall of cheering crowds, whistles, the jazz of dribbling and sneakers squeaking on the court. The guys we sat next to are serious hometown Clippers fans. They glance at our purple jerseys and thankfully decide to tolerate us. I extend the olive branch and confess to them I’m a Griffin fan. They reciprocate by telling my how great Reddick is. I absolutely hate Reddick. I don’t think he’s had an amazing impact on the Clippers since coming over from Toronto, even though this season he’s been absolutely crucial while Griffin and Deandre Jordan have been out. Anyway, Reddick is not Blake. Hell, he’s not Jamal Crawford. I love Jamal. So, even though we’re friendly, the whole night, I quietly think these guys are Reddickulus! 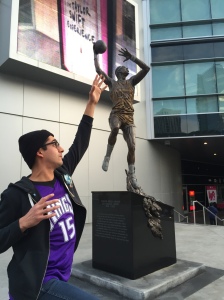 In what was the best birthday present I could ask for, the Kings left Staples with a victory over the Clippers. The Kings had a nice run during the last four minutes of the second quarter, giving them a six-point lead over LAC going into the half. That energy carried over into the third, but surprising performances from the Clippers’ Cole Aldrich and Luc Ricard Mbah a Moute, and of course CP3’s sticky fingers, created some opportunities for LA to close the gap. By the 4th, the game was neck and neck again. The Kings are notorious for collapsing in the 4th quarter, but Coach Karl managed the team’s energy output well. With the clock running down, the Kings were able to stop Paul Pierce from making a game-tying three, and after that a series of fouls which were meant to slow the Kings down ended up securing the win. Cousins, a few weeks away from the highest scoring game of the NBA season, only scored 17 points, but had 6 assists. Rondo had 13 points and 10 assists, and because of the selfless ball movement, six Kings ended up scoring in double-digits, including baby Ben McLemore, while the Clippers relied on the solid shooting efforts of Crawford and Reddick.

It felt great to win, even more so because Kev and I were the cool outsiders. We were part of a small group of people in LA, Northern California transplants and ambassadors, forever purple, stoked on the Kings win. I was in such a good mood, I think I may have only mentioned once that winning that game should have been a sure thing, particularly when the Clippers didn’t have Griffin or Jordan playing. It didn’t seem like a conditional victory, but a sign of playoff potential. Every Kings win counts.