Believe it or not, there was a time when you couldn’t find an Iron Man Halloween costume at Target. Nowadays he’s everywhere – Iron Man beanies, Iron Man pj’s, Iron Man coffee mugs – and we owe it all to Robert Downey, Jr. Back in 2008 the Marvel movie universe consisted only of sub-par Brian Singer X-Men films, a lame Tobey Maguire Spider-Man, and some truly awful Fantastic Four and Daredevil flicks. Enter Downey and director John Favreau, who fired the opening shot that would redefine the Marvel cinematic world and,  ultimately, the comic books it’s based on.

Iron man is now one of Marvel’s flagship titles and one that people are most likely to buy on name recognition only. But what the unsuspecting casual buyer doesn’t realize is that this new Iron Man comic is written by one of the best in the business. Brian Michael Bendis knows what he’s doing and instead of trying to distance the comic from the films, he brings his own flair for the theatrical to these pages and his spot-on dialogue rolls off your lips. Helping Bendis out is the magnificent art of David Marquez whose cinematic vibe only enhances the writing. Employing a photo-realistic style meshed with manga-influenced action scenes, the art here is stellar.The cool thing about comics is that YOU get to be the hero. You read their words and get to be inside of the heads of larger-than-life personas. Tony Stark is a billionaire, something none of us fanboys actually are, but for 21 pages we get to be one. We get to be Tony Stark (and if you tell me you don’t read Tony’s word balloons with RDJ’s voice in your head, you are a liar). 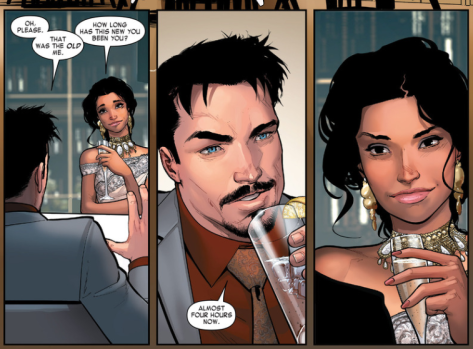 Bendis tackles Tony’s world with a maturity and restraint that is missing in some of the younger heroes that he writes. That’s not to say there isn’t room for jokes (I love the “Thor showing up to impress Tony’s date” bit), but he keeps the snarkiness to a minimum, and by the time you get halfway through this first issue you completely understand what Tony’s all about and the world he lives in. Bendis understands that even though the logo on the front cover says “The Invincible Iron Man,” it is a Tony Stark comic book. It always has been.