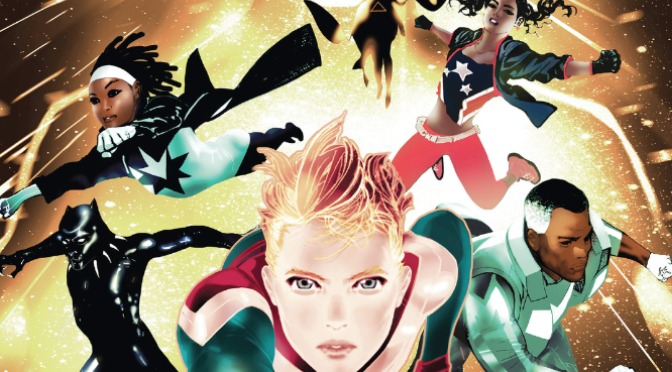 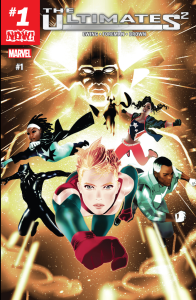 In the post-Civil War II era, which, unfortunately, continues to crazily coexist with the Civil War II era, the Marvel universe still has a need for a team of “awesome people working together to do awesome things.” Maybe more so now than ever. When Ewing and Rocafort’s ANAD Ultimates series wrapped with issue #12 last month, we were treated to yet another one of those g-d spoilers caused by ridiculous scheduling delays. Namely, that Civil War II would conclude with Black Panther switching sides, turning on Captain Marvel, and effectively shutting down their proactive problem-solving super-team of super-scientists. Say it ain’t so, T’Challa. This series was so good.

Of course, we were also given notice that the team would be back in Ultimates² #1. Al Ewing is joined by new series artist Travel Foreman and colorist Dan Brown for the highlight of Marvel NOW! Week 8, hitting stands the same day as the rather anti-climactic Civil War II #7 (which isn’t the last issue by the way). Not a moment too soon, either, because now that the Earth’s heroes have (apparently) finished their petty squabble over the merits of predictive justice, the Ultimates can get back to work taking care of the problems that really need solving. Enter Anti-Man, newly knighted by the transformed Galactus as the first Herald of Life. And if nobody was listening before (except Thanos, ironically), it’s time to pay attention. The universe is in chains, and the Cosmic Jailer seems to be a very pressing issue. 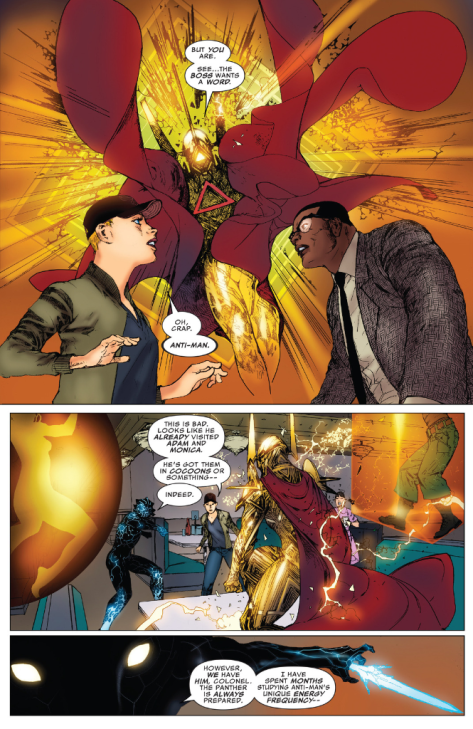 Foreman has some big shoes to fill, as Kenneth Rocafort’s art on the first Ultimates arc helped establish the scope and direction for a super-team book designed to deal with inter-dimensional and pan-galactic entities. But he gets it. Foreman has a classic intricacy to his style, but with the requisite amount of mind-bending experimentation. It worked really well on Jeff Lemire’s Animal Man. I expect big things in this book as well.

If T’Challa and Carol Danvers can mend fences, I certainly can as well. I ain’t mad at you Marvel. Hell, for all the bluster on the blogosphere, I think we’d all take scheduling delays over rushed phoned-in birdcage-liners any day (anyone read Blue Beetle?) This book, along with last week’s Thanos, represents a bold, exciting direction for the NOW! season, with books continuing the legacy of trippy cosmic sagas from Steve Ditko and Jim Starlin. I’m not saying that Ultimates² is destined to stand among Strange Tales or Warlock… but I’m not ready to bet against it either.

All New All Different Marvel: Week 60
At some point Civil War II figures to make a satisfying collected read, maybe something to gift to that brother of mine who only checks in on comics occasionally and whose last conversation regarding Marvel’s latest event went something like this:

Me: Both Rhodey and Iron Man died. Oh – and The Hulk too.

Me: And guess who killed The Hulk? Hawkeye.

Bro: Shut the fuck up!

So, sure. Said and done, packaged and dustjacketed, it might make a nice Christmas gift (not this Christmas mind you; the last issue isn’t even scheduled to drop until the end of December). But dragged on for this long and the book has gone from being annoying to being an outright joke, with writers like Nick Spencer and Al Ewing poking fun in the pages of their own mags. Issue #7 of the now eight-issue series came out this week and… nothing really happens. But it’s part of the story, which has been a pretty, shock-sprinkled page-turner for what that’s worth. And maybe I’ll appreciate reading it as a single volume after the annoyance and snickering has subsided.