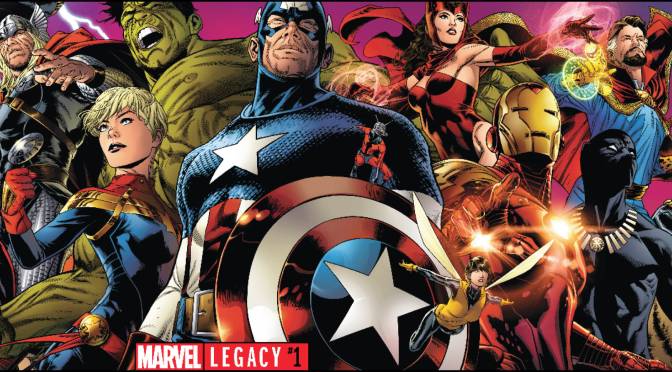 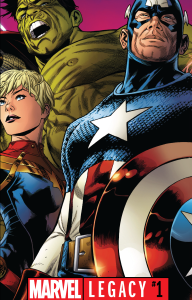 We’ve been building up to this for months, in the pages of various one-shot Generations books: a new publishing initiative that honors the tradition of decades of Marvel characters, stories, concepts, and creators with a mind towards the future and a host of recent additions to the superhero family. Legacy is a loaded term, and not one that you’d expect the House of Ideas – or its fans – to take lightly. For this latest trade dress, a return to sequential numbering for the various series is only part of the appeal. Of the two major comics publishers, DC has been the one traditionally most hesitant to restart volume numbering on its titles, respecting a much more rigid and carefully curated continuity. Which is fine. Part of Marvel’s appeal has always been its loose adherence to storyline sequence and chronology. Maybe Tony Stark created the Iron Man armor during the Cold War… or maybe it was during the war in Afghanistan… it doesn’t matter; the spirit of the story and the character is more important.

But, at some point, all of these new number one issues and “All-New” restarts and “NOW” jumping-on points start to disrespect the ancestry. How excited are we, really, for a new Avengers series every fall? Oh, this one isn’t just all-new, but all-different as well? It’s lousy marketing, and it takes away from the fact that Marvel Comics continues to lead the field with the best stories, characters, and creative teams in the superhero genre. Having said that, it sure is nice when you can pull in some new fans, and nothing seems like an easier gateway book than a first issue.

So this season they’re trying something a little different (trying something different again – Marvel did a return to series numbering for some of its books in the early 2000’s as well). Following this week’s Marvel Legacy one-shot, by Jason Aaron and a host of incredible artists, a number of new titles will be debuting, but the majority of their books will be renumbered to align across previous volumes. Next week’s Avengers #672, for example, follows 406 issues of the initial run; the thirteen issues of that abominable Liefeld volume two from ’96; eighty-four issues during the Busiek-era volume three, sixty-four issues from Bendis’s first New Avengers title; the thirty-four issues from volume four that kicked off the “Heroic Age” publishing initiative; forty-four issues of 2013’s volume five, Hickman’s follow-up to Avengers vs. X-Men; the fifteen issues of Waid’s All-New All-Different Avengers; aaaand the eleven issues of the most recent “NOW” Avengers restart. Whew. Confusing, right?

Not only will Avengers #672 revive the original numbering, but it will also be merged with two other offshoot titles – U.S.Avengers and Uncanny Avengers – before the end of the year. But more on those developments next week. Meanwhile, on the topic of Avengers, and an intense spin on the promise of legacy, let’s turn our attention back to Aaron’s one-shot, and the main storyline, with sensational art by Esad Ribić. 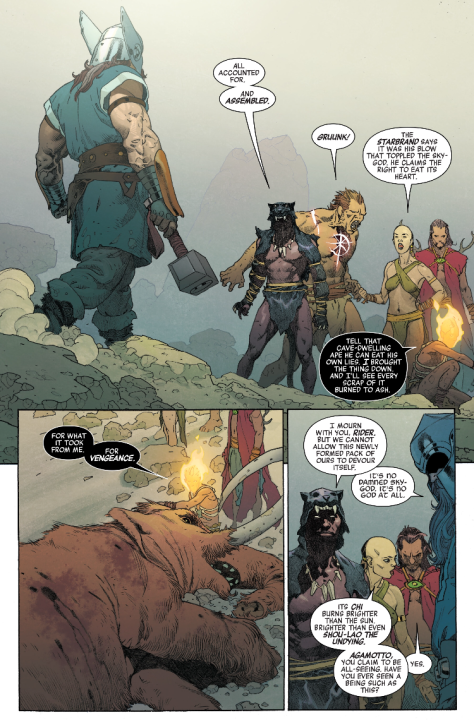 Those are the Avengers, if you will, of one million B.C. That’s Odin wielding Mjolnir, and the legendary Agamotto himself operating under the mantle of Sorcerer Supreme. Prior incarnations of Black Panther, Iron Fist, and Ghost Rider round out the team, along with Phoenix, whose past relationship with the Asgardian allfather was revealed recently in the Thor Generations book.

The story moves from the distant past, and the aftermath of a battle with a diseased Celestial looking to summon the final host, into the present, where a host of modern characters are set to involve themselves in the long-dormant machinations of these cosmic gods that even the Marvel deities bow down to. While digging into the comic book stories of Valkyrie for a recent primer, I revisited Roy Thomas’s Eternals story from the early 80’s. Nothing makes me happier – or seems more appropriate for a Legacy trade dress – than seeing one of Jack Kirby’s finest Marvel concepts crackle back into relevance for this new era. Thank goodness, too, because what Marvel Television has done to Jack’s Inhumans is nigh unforgivable.

Beyond that main frame, this 50-page gem also features brief teasers from all around the Marvel universe, allowing readers to get caught up with character developments as disparate as Deadpool or Black Panther, and showcasing some truly exciting storylines for this upcoming season. The reveal in the last sequence is particularly dramatic. Herein lies the real appeal of the Legacy launch. This book more closely mirrors what DC has been doing in recent years as kickoffs to their new publishing initiatives. Unlike the Rebirth special, however, this Marvel Legacy book just makes a whole lot more sense to me. And gets me really fired up for their fall slate of books. (The DC stalwarts on our website are spotty contributors, so to hell with ’em.)

Every little series trailer and narrative sneak peek underscores the purpose behind Legacy. In an interview in the first issue of the new FOOM! (itself a fun tribute to Marvel’s storied past, bringing back the excellent “Friends Of Ol’ Marvel” magazine from the 70’s), executive editor Tom Brevoort sums up the direction:

Marvel Legacy is about touching base with the past as we build toward the future. It’s about reminding people about the long history of the Marvel Universe and all of the great characters that have contributed to it over the years. And it’s about telling the strongest stories that we can.”

Week 1 of Marvel Legacy officially launches next week with eight titles, including the aforementioned Avengers #672, Iron Fist #73, and Venom #155.