I’m foregoing the weekly new release column to focus on a different kind of release: the 2018 San Diego Comic Con variant. With the convention officially kicking off tomorrow (and knowing full well that I have no willpower when it comes to resisting limited editions and event exclusives), here’s a list of five special releases that are on my radar. 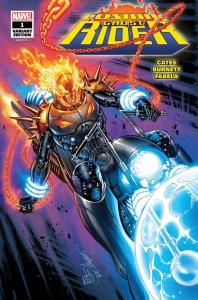 Cosmic Ghost Rider #1 – J. Scott Campbell Glow-in-the-Dark Variant (Marvel)
A surprisingly entertaining addition to Marvel’s recent “Fresh Start” initiative, Cosmic Ghost Rider by Donny Cates and Dylan Burnett is an offbeat far-flung future jaunt taking the new Ghost Rider, Frank Castle, on a version of the back-in-time-to-kill-Hitler plot. This time, however, the Punishing nutjob journeys back to ancient Titan to fuck with a certain purple Eternal in his crib. The book itself is entertaining, and funny in a way that Deadpool wishes it could be, and this limited variant has a cover that glows in the dark. So. I want it.

Black Hammer #1 – Fábio Moon Convention Exclusive (Dark Horse)
Jeff Lemire’s Eisner-winning love letter to Golden Age superheroes has been one of my favorite books over the last few years, and Dark Horse has three different variant covers to celebrate the reprinting of this first issue. Of the three, this cover by Moon, paying tribute to the first issue of Giffen & Maguire’s Justice League, is easily my favorite. Limited print run of 1,400 copies.

Image Firsts Deadly Class #1 – SyFy Cast Photo Cover (Image)
Remender and Craig’s San Francisco-set title comes to television next year as SyFy’s latest comic book-inspired series (and, I confess, I’ve come around to Krypton). This special con exclusive features photos of some of the cast members and it’s free. Of course that means you’ll have to hit the Image booth as soon as possible. Also, if you score a ticket to the cast signing on Saturday, this would be a fabulous choice for one of your two allowed items.

Catwoman #1 Convention Exclusive (Graphitti Designs)
Normally I’d be more inclined to seek out a variant with some different cover art, as opposed to the “metallic” variants churned out by Graphitti and Oni Press, to name a few. But I’m a big fan of Joëlle Jones’s new Catwoman book, and I have a particular fondness for this cover version. So if you’re going to dress that art up with some chrome splash, and slap that “exclusive” tag alongside, I’m onboard. 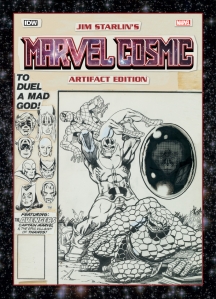 Jim Starlin’s Marvel Cosmic Artifact Edition, Signed & Numbered SDCC Variant (IDW)
This is a big-ticket item, both in price and scope. IDW’s Artifact Editions are beautiful artist-approved editions that reproduce original and published art in a 12″ x 17″ format (the actual size of standard comic book Bristol). This particular volume is a tribute to one of my all-time favorite creators, focusing on Starlin’s cosmic pantheon with stories involving Warlock, Thanos, and Captain Marvel. The SDCC edition of this book has an exclusive cover, a signed & numbered bookplate, and sells for $150.