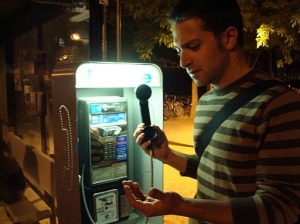 I’ve been GPS-navigated to every corner of the state and haven’t struggled with the endearing frustration of re-folding a Rand-McNally in years. I get every baseball broadcast on XM, basketball scores in a Google text, and temper snowboarding expectations with an hourly weather update on an iPhone. A month ago I was in a library and shivered in its obsolete silence. The friend I would ask, “What was the name of that artist who…” is now named Wiki, substituting presumed accuracy for the warmth of follow-up conversation. Little pieces of my digitized soul drift aimlessly online, trapped on social networking profiles I established years ago and have forgotten existed. For every avatar I’ve befriended and every old school chum I’ve recovered, a piece of my memory is auctioned off for cyborg replacement.

We can all be reached in an instant. Cell phones in our pockets like Spider-Tracers on our getaway personae. But I can dimly remember when life was very different. When I knew the location of virtually every payphone on Geary and Clement, and had many of the numbers memorized. Wait on the corner of 8th Avenue outside the Radio Shack; I’ll call you when I get off the bus. Meeting people took on a since-forgotten sense of anticipation — both from the uncertainty of arrival and the true sanctity of personal communication, unaffected by prior emails or cellular status reports. I was in middle school. What the hell did I know about conversation?

The school-age me is a distant creature from the students I deal with on a daily basis. I would have embraced this world of mp3s and handheld gaming devices; my mother would have grounded me for spending too much money on texting instead of too much money on comic books. What would I have gained? What would I have lost? Would I be any worse off? I’d undoubtedly feel less scattered… or, at least, I would live in blissful ignorance of my fragmented hard drive.

I distinctly remember my grandfather making a big deal out of a payphone rate increase. I must have been in sixth or seventh grade and phone calls home (or to a friend, or the payphone outside the Coronet, or to Best of Two Worlds on a Wednesday in the time before the internet told you in advance which comics were shipping that week and the wait-and-see approach was a scintillating lightning-in-a-bottle buzz of expectation) were going to cost me twenty cents now instead of ten. He filled up my hand with dimes. Always make sure you have dimes, he said.

Last night I owed $2.10 for an iced tea… and waited on ninety cents in change…