Comic books and video games are all very well, but those of us who aren’t terrified of aging — desperately clinging to our skinny jeans, cool scarves, bedhead and taste for juvenalia beyond all propriety and decorum — may want something with a little more heft. So here’s some non-picture books for your consideration. (Full disclosure: There’s usually a little section of pictures in the middle.) Pipe and slippers optional, but recommended.

Washington: A Life by Ron Chernow 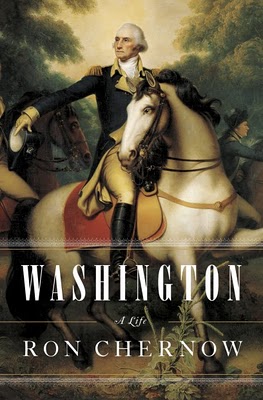 Unlike the last noteworthy Washington bio, Joseph J. Ellis‘ brief 2004 His Excellency, Chernow’s work is not a cover-the-basics summary for the casual reader. (Not a criticism. That was the book’s purpose.) Chernow delves into amazingly rich detail, while never losing his grip on the forward momentum of the narrative flow. Interested in Washington’s famous dentures? Chernow provides lengthy paragraphs on not only the materials used in their construction (not wood, you simpletons), but how they affected Washington’s appearance and interactions, and deep background on his relationship with his dentists. (Washington was very ashamed of his dental deficiencies, and the letters to his dentists are in kind of a code language, to spare him embarrassment if his correspondence was ever made public.)

Chernow also sheds light on the difficult relationship between Washington and his battle-axe mother (who lived to see him become president, not that she seemed to care — she was more interested in hitting him up for money.) His somewhat lazy, shiftless step-son also caused him much worry, although it seems doubtful that any offspring could live up to his exacting standards. He never had biological children of his own. His marriage to rich widow Martha Custis, though a happy one, was made as more of a business arrangement, which was the custom of the time among 18th century landowners. Washington admitted privately to a friend that there wasn’t a lot of “fire between the sheets” (I’m paraphrasing, but not by much), but straying beyond his marriage would be unthinkable for someone of Washington’s level of self-control and sense of honor. Chernow believes there’s simply not enough evidence to confirm or refute the commonly held belief in G.W.’s infertility. A similar lack of evidence prevents Chernow from making any conclusions on Washington’s much-ballyhooed (in previous bios) youthful dalliance with his married neighbor Sally Fairfax — it seems the relationship was affectionate but chaste. [Anyone remember the ’84 CBS mini-series with Barry Bostwick as G.W.? In an otherwise even-handed telling of Washington’s life, former Charlie’s Angel Jaclyn Smith (!) stuck out like a sore thumb, portraying Sally Fairfax as a panting, sex-starved seductress.] Whatever level on which his feminine relationships existed, Washington always preferred the company of women, where he felt he could be truly relaxed and less scrutinized.

The process of turning this flesh-and-blood Virginia planter into an idealized marble statue was well under way during Washington’s own lifetime. Washington was very aware of the looming figure he would become in American history. With this weight on his shoulders, he seemed determined never to set a foot wrong. His agony over every decision, and obsession with making sure he appeared to have not an iota of self-interest or ambition sometimes gave him the whiff of the martyr. His letters to associates are chock-full of sad laments that “public duty” was costing him his health and happiness, but he felt he could not turn it down or the fragile new country would slide into the abyss.

Chernow does not shy away from Washington’s one truly negative trait — he was a slave-owner. A deeply conflicted one, one who made many private remarks expressing his desire that the slave system would someday end, but one who did not make any move to change the situation himself. (Unlike his protege, Alexander Hamilton, who helped make slavery illegal in his home state of New York. Chernow’s 2004 biography of Hamilton is also highly recommended. The man on the ten-dollar bill is largely forgotten by those without an avid interest in U.S. history, but without him, the country may have turned out very differently, or failed altogether. Not that Hamilton was without glaring faults of his own, but that’s another story…)

As a general in the Revolutionary War, G.W. was not a brilliant strategist or tactician, but kept a badly outnumbered and under-supplied army in the field for over six years through sheer force of will and personality. As the chairman of the Constitutional Convention in 1787, he was the only figure who all thirteen states — each deeply enmeshed in self-interest and petty squabbling after the revolution, but in agreement in their distaste for strong central authority — could trust to lead them into a new national government. As the first President of the United States, he proved a much more deft politician than usually given credit for, very much aware that every move he made would set a precedent. (The honeymoon period of hero worship wore off by the middle of his first term, and he was soon the victim of potshots taken by political opponents, just like every other president that followed.)

The world powers of Europe observed in astonishment as Washington voluntarily gave up absolute military authority when he retired as general of the Continental Army in 1783, then stepped down as Chief Executive of the civil government at the end of his second term in 1797. No one in their experience had disinterestedly walked away from so much power — twice.

Chernow’s work gives a portrait of someone who was aloof, class-conscious, overly-formal, sometimes humorless and ill-tempered. Also generous to a fault, fair-minded, practical, an avid theater-lover (even the bawdy plays), an amateur interior decorator (he took immense delight in selecting art and furnishings for every dwelling he occupied), a notably nimble dancer — and most importantly for a young republic suspicious of centralized authority — absolutely uninterested in power for its own ends, and absolutely incorruptible.

(Interested in other recent presidential bios? Ronald C. White’s 2009 A. Lincoln: A Biography is a thorough and up-to-date look at the Great Emancipator — but I still prefer David Herbert Donald’s 1996 Lincoln. I wrote about Harlow Unger’s The Last Founding Father: James Monroe and a Nation’s Call to Greatness earlier this year.)