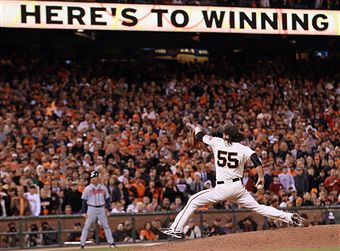 On the last day of the 2010 regular season, with all apologies to that scintillating infield of Will Clark, Robby Thompson, and Matt Williams, I realized that, no matter how this Orange October would resolve, this team was my favorite Giants team of all time.  This band of castoffs and misfits, this gritty homegrown pitching staff, this Buster Posey kid and thong-swinging Aubrey Huff, went on to create one of the single most intense stretches of anticipation, tension, and excitement in my life.  A stretch that ended, of course, in pure joy.

It’s been a long time coming. A lot of heartbreak and a lot of frustration. But a lot of exuberance too. Winning the World Series was not just about chasing away demons from so many failed seasons past. Throughout this entire postseason I had exultant flashbacks to teams, players, and even broadcasters from the past. So forgive me if I’m not quite ready to move on completely from that magical season.

On the eve of Opening Day, 2011, I need to take a minute and count down my

The Giants won the West. We were hosting the Wild Card winning Atlanta Braves for the first two of a five-game NLDS.  So why was the world ready to send the Braves off to another LCS before the first pitch had even been thrown? Why am I hearing on KNBR that our pitching measures up about equally, but the Braves have the edge in hitting?

This east coast bias monstrosity was just starting to build.  And in the opposite corner, an orange-and-black northern California heartbeat, freak-powered and boldly defiant.  You want to see pitching?

Tim Lincecum struck out fourteen Braves in Game One of the NLDS. Fourteen. Equal my ass. That one run?  All the Giants needed.  There’s a reason this kid won two straight Cy Young awards. And if the rest of the country hadn’t caught on yet, this was just the kind of call to attention they needed.

Orange October fever was in full swing, and the Giant fanbase swelled to even greater numbers.  Winning does this.  It did it to me: the 1987 division-winning team made a lifelong fan out of me.  Despite things not working out with St. Louis, I was hooked.  And last year it made me so happy to see all those SF logos everywhere I went, knowing that some of those fans were experiencing that same first taste of baseball fanaticism that I had latched onto decades earlier. 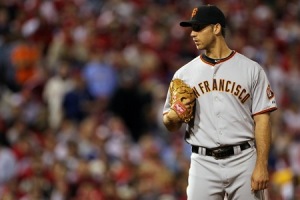 Last season Giants fans were given the gift of Marty Lurie. A long-time A’s radio personality moved over to KNBR and talked Giants all season long.  A lifelong aficionado of the game, Lurie told stories, interviewed players, and offered insights into the game and the current season that were honest and measured, without ever trying to stir things up or sensationalize developments.

I first heard him in Spring Training and was surprised by how engaging his radio shows were, shocked that I’d never heard him (or of him) before.  Not enough time listening to Oakland broadcasts, I suppose.  He became the voice I listened to after every game, and on every weekend drive home from the City. On one of those drives home, deep into the pennant chase, Marty told me what the real key to winning in the postseason was going to be.  The bullpen, he said.  And it stuck.  Because I didn’t believe him.  The bullpen? No — we need Pablo to bounce back, Sanchez to dominate through October, and for Torres to show off the amazing benefits of a little Ritalin.  Those were going to be the x-factors.

I’ll be honest — and I think this is probably true for many Giants fans — I was way more nervous during the NLCS than I was during the World Series.  Hell, all the “experts” had picked the Phillies in five, sometimes four, games.  All the Jim Rome-worshiping, stats-tweeting wannabe experts too.  I lost Facebook friends over this (Good riddance, Alex Mentkowski).  True: the Phillies had an incredible team.  They deserved to be in the NLCS.  They did not, however, deserve to get to the World Series.

Heading into the deciding Game Six of the NLCS, in Philadelphia, I had faith in Jonathan Sanchez.  The postseason had been rocky for The ‘Chez thus far, but this was the guy that silenced the Padres on the last day of the season and made Mat Latos cry like a bratty toddler with a skinned knee. This was the biggest game of his life.

But Sanchez didn’t make it out of the third inning.  After walking Placido Polanco and plunking Chase Utley to start the frame, I felt the wheels coming loose.  And all I could think was, this would be a good time to be right Marty Lurie…

In steps Jeremy Affeldt, shutting the door on the Phils and stranding both runners.  He came out again for the fourth, with the same result. 1-2-3.  Then it was Madison Bumgarner’s turn.  The twenty-one year-old rookie had to face the heart of that fearsome Phillies lineup.  A single, a double, and an intentional walk to load the bases… my head was pounding and it physically hurt to be in any position other than a crouch, eyeing the television through my spread fingers.

But he did it.  Two more scoreless innings later, and it was Javy Lopez’s turn.  Then an out from Timmy Lincecum, of all people, and it would all be on the right arm of Brian Wilson.

Marty Lurie, you’re a baseball genius.  I’ve followed the game for a long time, and I love that I can keep learning more about it from people like you, Jon Miller, Duane Kuiper, and Mike Krukow.  Reminded me vividly of sitting on the floor of my grandparents’ living room listening to Hank Greenwald’s voice calling games from Candlestick.  My grandmother barely understood English, but she loved his voice, and the cadence of the game.  I learned what a full count was, and why it was good that Milt May had been a “free agent.” This wasn’t sportstalk radio (which I’m still not always very tolerant of), but baseball radio.  Thank goodness it’s still around. 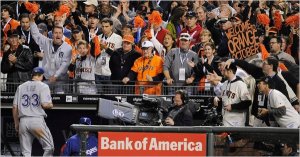 Here I thought the Phillies hype was bad.

Even my ignoramus hair stylist knew who Cliff Lee was, and he was unbeatable.  He was the key to moving past the Yankees. He was the ticket to a World Series title, the greatest thing in Texas since oil. He had never lost a postseason game, and never would. He was a strike-throwing clinician who walked on water and could make a fool of eighteen-armed Durga tossing a beachball.

Cliff Lee this, Cliff Lee that.  Yes, he throws strikes. And the Giants lineup hits the shit out of strikes.

Eight hits off Lee in four and two-thirds. Six earned runs.  Lincecum wasn’t flawless, but he didn’t need to be.  In Game One of the World Series, under the lights of AT&T, the east coast bias suddenly didn’t know what to do when the “weaker-hitting” team starting hitting the crap out of the ball.

Oh, and we beat his ass in game five to win the World Series. Cliff Lee’s postseason record is now 7 and 2.

Back to that insanely tense Game Six of the NLCS.  A Juan Uribe solo shot off Ryan Madson in the top of the eighth gave our heroes a one-run lead.  Now to hold it.

Brian Wilson worked two outs in the eighth (when Marty Lurie was extolling the virtues of a quality bullpen, I don’t think he was talking about Tim Lincecum), and then proceeded to make the bottom of the ninth inning unbelievably heart-stopping.

Two walks, runners at first and second, and Ryan Howard at the plate. A single ties this, and anything bigger wins it for the Phils.  Full count.

The seventh pitch of that at bat left Wilson’s hand, and disappeared into Posey’s glove. After a pause that seemed to last forever, Tom Hallion cranked his fist around his torso for the most satisfying called strike three I have ever witnessed.  Sit down Ryan Howard. Go home Phillies offense. The Giants just beat you in the NLCS and a middle relief lefty-specialist named Javy Lopez got credit for the win.

In October of ’89, my dad pulled me out of school on a Monday and from our right field seats at Candlestick, we saw Will Clark’s bases-loaded single off Mitch Williams, over the mound and up the middle… Giants in the World Series. That night I got to watch Brian Wilson strike out Ryan Howard with my dad and my son… Giants in the World Series. Whatever ended up happening, this is baseball we never forget.

Game Five of the World Series showcased the pitching matchup that many expected in Game One.

Six scoreless innings, back and forth between Lincecum and Lee.  Until the top of the seventh, when Edgar Renteria, the much-maligned, oft-injured, barely-intelligible Edgar Renteria had the greatest hit in San Francisco Giants history.

So much went into this game, into this inning.  Aubrey Huff’s first ever sacrifice bunt, Pat Burrell’s deflating strikeout… the world on Edgar’s shoulders.  And a confidence and pride that no one save his teammates had ever been privy to.

This was the night I lost my voice for the twelfth time that season. The night I passed out, drunk on happy. Somewhere in there I still managed to say to any and all that were listening: if I have another kid, I’m naming it Edgar. Even if it’s a girl.  Sherice thinks I was kidding.  But I said it.

There’s no precedent, no link to games of the past. I often wondered what it would feel like, saying World Champion Giants.  I wondered just as often if I’d ever even get the chance. It’s nice to know that there has been no let-down, no what-do-I-do-now sentiment. That moment was the emotion I’ll add to the forever vault of baseball fanaticism.  The single best moment of the 2010 postseason, and likely the single best moment in my fandom lifetime.