Ah my comic book loving friends, welcome to ghostmann’s time-machine. Step on in and let’s take a trip through time. Today our journey will follow the incredible career of Mr. Frank Miller. Now, sit back while I calculate our first destination here in the time-machine computer console. Yes, there, all set out first stop in time is…..

Frank Miller’s first job as Writer and Artist came in the form of Matt Murdock. Daredevil at the time wasn’t selling that great so Marvel had no problem handing over the title to a young upstart with no experience. But Miller seized this opportunity and forever changed the character of Daredevil and himself as a comic book creator. The stories he wrote over thirty years ago still have resonance in the Daredevil comic being published by Marvel in 2012. What Miller did has rarely been duplicated – adding to the history of a comic book character and having that history become part of the legend. Oh, and he also gave us ninjas.

Man, that sure was great comic. Worth picking up the reprints in trade paperback at your LCBS. Now then, let’s head on to our next stop…..

As the current issue of Wolverine and The X-Men asks, “Remember when Wolverine was cool?” Yeah, it was back in 1982 when Chris Claremont and Miller teamed up to give us this incredible four-issue mini-series that delved deeper into Wolverine’s backstory than had ever been told up to this point in time. Remember, back in 1982 there was no Weapon X or James Howlett or bone claws. It was just this moody little fucker with a bad haircut and attitude that popped his claws if you looked at him wrong. What you have in this series is the essence of Wolverine – in the purest sense of the word. Miller also drew some more kick-ass ninjas! 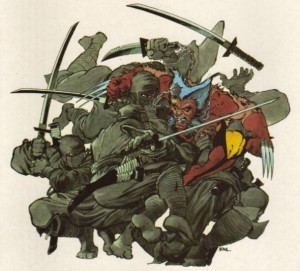 Wolverine sure was best at what he does. Does anyone need a bathroom break? No? Okay good, look up ahead – it’s the year……

Miller’s first creator-owned comic book was the shot in the arm that DC needed back in 1983. This futuristic story of a time-crossed samurai had Miller drastically changing his art style to almost mimic that of Moebius – but it worked and Ronin is a glimpse at was is to come in Miller’s career. It also gave us one of the first comics to be printed on better paper stock and without ads. This “prestige” format would be DC’s bread and butter throughout much of the 80’s.

Hey, you in the back, please keep your hands and arms inside the time-machine at all times please. Thank you. Now then, we have come to one of the biggest stops in our travels…… 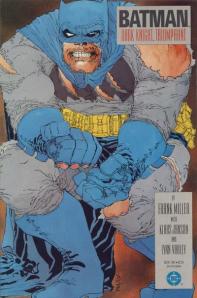 If Frank Miller never did anything else in comics, this series alone would still make him one of the greatest comic book writers in the history of the medium. Universally praised and for good reason, The Dark Knight Returns brought comics into the modern age and made the rest of the world sit up and take notice of these little “funny books” and just what kind of powerful storytelling vehicles they could be. Everything Miller had done up to this point was a dry run for this earth-shattering graphic novel. All his techniques came into play here – the dark foreboding lines of his art – the insane panel grids that mimicked a film strip playing out before your eyes – characters that were once old hat and boring, such as the Joker, were now hyper-stylized and surreal and fucking deadly – no moral messages, just a dark world in which good people struggled against ternary, be it political or criminal. With the Dark Knight Frank Miller cemented his place in the hall of comic legends. This is his Sgt. Peppers. This is his David. Nothing Miller has done since has ever been this good. Every Batman comic published after 1986 has been measured against this masterpiece and NONE have even come close to its greatness – except for the one – which just happens to be our next stop.

Even though Miller only wrote and did not draw this four issue arc in Batman, we are going to take a look at this story since it still echoes in comics, and even movies, to this day. What Miller did here had never been done before – take an iconic character like Batman and show us his first year on the job. Pretty simple when you think about, and nowadays it’s part and parcel for comics to utilize this storytelling device. Not only did Miller give us the struggles of a young Bruce Wayne/Batman, he also gave us new insight into Commissioner Gordon and Catwoman, two of the central figures in Batman’s life. This story is so good that it has been referenced in countless other comics and been used as the springboard for Christopher Nolan’s re-boot of the Batman film franchise. There has even been a cartoon made of the 4 issue mini-series.

Well folks as you can see Batman will forever live in the shadow of Frank Miller. Now after the year 1987 things started to slow down in comics for Mr. Miller. With his super success he began to question the big two’s (Marvel and DC) practices in regards to they way they treated the creators that worked for them. This led to him quitting comics, sorta, and focusing on a career in Hollywood.

Who here has seen Robocop?
(all hands go up)

Who here has seen Robocop 2?
(only 3 hands raised)

Yep, that’s what I thought. Which is why Miller came back to comics like gangbusters with his next epic, which took place at our next stop…… 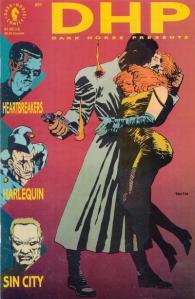 Miller’s return to comics was not a grand spectacle or in your face event. No, it was part of the low budget anthology book Dark Horse Presents. In issue 51 along with Stefano Gaudiano’s 8 page “Harlequin” story, Anina Bennett and Paul Guinan’s 8 page “Trouble in Paradise” story, was Frank Millers little twelve-page story called “Sin City.” [Editor’s note: the first chapter of Miller’s initial Sin City tale was published in the even harder to find Dark Horse Fifth Anniversary Special; issue 51 of DHP featured chapter two.] Here Miller would enter the world of black & white for the first time (a world he really hasn’t left since) and redefine what milleresque would mean from here on out. Things were still grim and gritty but there was a splash of FUN that hadn’t been seen in Miller’s work before. It almost seemed that he was poking fun at himself and the dark cloud he helped spawn. For the next few years Sin City would be the only thing Miller would produce.

Well we have almost reached the end of our time traveling journey. Just three more stops. Up first is…..

In an almost “coffee-table” book fashion, Miller’s 300 would again break new ground in the world of comics. Each page an epic drawing, dowsed in glorious color. Miller took boring history 101 and made it COOL. Sure he took artistic liberties here but that’s the point – this is a work of art, and unfortunately Miller’s last great comic book.

Remember back in the year 1986 when Miller gave us the incredible Dark Knight Returns? Well, for years the public demanded a sequel and in 2001 they got it.

Miller’s distaste for mainstream comics is evident in this poor sequel to his greatest work. Perhaps he knew that he could never match or even come close to The Dark Knight Returns, but still I can’t help but feel that Miller was just collecting a paycheck with this three-issue mess of fluorescent color and wrinkles. We all should have got the hint when DC was billing this thing as DK2 – but still, I remember being excited about this when it was announced. Then I read it, and I felt like was just slapped in the face by Frank Miller and robbed. I felt that he should have given more to his fans. DK2 is the equivalent of Miller taking a shit on canvas and calling it art. It’s not. It’s shit.

Which brings us to our last stop of the day……

At this point I think Frank Miller needs to retire from comics. He has become a parody of himself. What started off clever and fun in Sin City has morphed into sad and pathetic. Holy Terror has very little going for it – almost no story – no character arcs – no nothing for the reader to gravitate too. At over 100 pages it still reads in a flash and in about five minutes you have all but forgotten this waste of a paper. Miller’s art has never looked worse than it does here. Finger smears line the borders and make the pages look like they have been handled by five-year olds. Is this supposed to be innovative and groundbreaking art? It just feels unfinished and rushed and messy on purpose. There are things that at first glance look horrible but over time the greatness inside is seen and you change your opinion.  I don’t see that happening with Holy Terror. I can honestly say that what was crap in 2011 will still crap in 2031.

And that concludes our time-machine trip. I hope you gained a little more knowledge about the legend, and I also hope you got the underlining message here – It’s better to quit while you’re ahead.