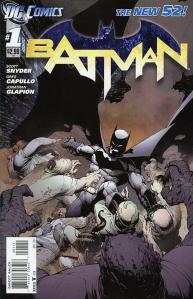 For a long time,  Saturday morning cartoons were my only inlet into the world of capes, cowls, and spandex.  Growing up, my comic-related knowledge relied on two volumes of colorized Eastman/Laird Teenage Mutant Ninja Turtle stories, and the entire set of ’95 Fleer Ultra Spider-Man trading cards.* Instead of reading the books, I watched every single super-hero cartoon that made its way to the Saturday morning block. Actual comic books were neglected, their covers providing a simple sense of the kinds of dramas that were supposed to unfold between my action figures. I was a superficial comic fan, liking the content for what it looked like, never really thinking about it as literature.

When I inevitably made the cross-over from television to graphic novels, I was eighteen, a legal adult, and I made mine Marvel. After all, it was Marvel’s cartoon cast of costume-clad characters that first piqued my pubescent fan-boy interest. Every opinion I’ve developed about comics, every urge to spend $3.99 on 24-pages of glossy, illustrated wonder is rooted in those Saturday mornings inside Marvel’s animated universe. And to this day, I see Marvel heroes as old friends–drinking buddies from the juice-box era, here to help me escape from boredom into a world of imagination.

There is, of course, one exception–the one exception I think every Marvel fan concedes to: The Batman. When I think about DC comics, only three (maybe four) characters jump to mind, all of whom grace the top three spots on this list, and Batman is hands down the coolest. Before Marvel got their shit together to produce accurate cartoon versions of their popular book titles, Warner Bros. had Batman: The Animated Series, an extension of the successful launch of Tim Burton’s cinematic Bat-franchise. Batman: TAS was DC’s sole cartoon offering for a long while, but it’s dark tone and excellent animation put it levels above anything Marvel had at the time, including the awesome Jim Lee/Chris Claremont inspired X-Men cartoon. Even after a well-received Justice League show and several (pretty good) Batman incarnations, The Animated Series is still the best super hero cartoon show ever.** So, shortly after pledging to devote myself strictly to the goings-on of the Marvel U, I allowed myself one concession – Batman books – and I opened my world to Gotham City legends by Alan Moore, Frank Miller, and Jeph Loeb. As one of DC’s signature characters, and arguably the most visible super hero in the game thanks to those fine Chris Nolan flicks, Batman carries the burden of many fans’ expectations. Die-hard readers critique lame Batman arcs with the same animosity as those against Julie Taymor Beatles musicals and inconsistencies in Star Wars prequels. So when DC relaunched all of their titles, believe when I say that Batman was one of the few that really mattered. 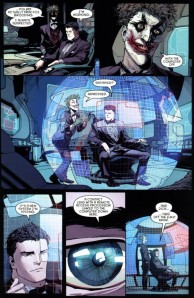 After legendary author Grant Morrison penned some of the most epic Batman stories of recent years,  DC tapped newcomer Scott Snyder, a Columbia educated author, whose American Vampire title on DC’s adult-oriented label, “Vertigo,” has garnered praise from critics and fans alike. Morrison took Batman to outer space, back in time, and finally around the world with his global crime-fighting franchise, “Batman, INC.” Scott Snyder brings Bruce Wayne back home to Gotham City in “Batman #1,” Batman’s first foray into the “New DCU.”

Everything that happened in Morrison’s books are still law under Snyder, and when we first see Batman, he is not a child who just watched his parents murdered on a cold night in Crime Alley. This book does not reboot the legend of Batman, but takes it to its next evolution. First-time readers can easily explore and assess Snyder’s vision of Batman without doing any extensive Wikipedia research, and fans will be pleased to have Batman back to “business-as-usual” in a mystery that is genuinely suspenseful in the classic “Batman” milieu. On another ruthless night in the big city of Gotham, a corpse surfaces with a warning: “Bruce Wayne will die tomorrow.” The only clue is a throwing knife emblazoned with the image of an Athenian owl. Bruce Wayne remains unstirred. Why should he care? He is the Dark Knight and Gotham is his town. The symbol seems innocuous, its meaningfulness dismissed because of its reference to an old Gotham folk song, “The Court of Owls.” According to the song, the Court rules Gotham from behind the scenes, employing an assassin-enforcer, known as “The Talon,” to deal with any inconvenience. No one in Gotham believes in the Court of Owls, especially Batman. After all, the Wayne family is a Gotham City institution and has been for hundreds of years; there’s nothing about Gotham that Bruce Wayne/Batman doesn’t know about. Right?

This is where Snyder gets to work. Slapping “#1” on the cover of a comic is a good way to lube sales, but if DC expected to keep new readers, they were going to have to bring entertaining stories that mattered. Snyder takes the Batman universe, and instead of disassembling anything, he makes us question whether we really know what to expect from Gotham City. More importantly, he makes Batman ask that same question. As much as he’d like to dismiss it as coincidence or superstition, the possibility that the Court is real becomes dangerously clear to Wayne after a visit from the Talon, who ninja-kicks Bruce out of the top of Wayne Tower. The threat of a secret organization is nothing new for the Dark Knight, but “The Court of Owls” is more than a corny villain. These guys remind us that we don’t know everything. By throwing ol’ pointy-ears a curve ball on his home turf, subverting the long standing, symbiotic relationship between Batman and his city, Snyder promises readers there’s still fun to be had, legends to be made, and if we just turn the page, they’ll be ours to enjoy. Some of the sequences may seem conventionally familiar but they’re polished under the care of its new creative team, and five issues deep, this story keeps its exciting momentum. 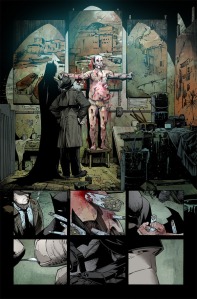 However, the credit doesn’t fall squarely on Scott Snyder, because Greg Capullo’s art renders life into the pages of Batman #1. Capullo maintains the “classical” tone of this urban folk tale with  illustrations that look like early 20th century concept art . “The Court of Owls” is a relic from Gotham’s past at the turn of the twentieth century. Capullo’s drawings of Gotham show it as a bustling urban sprawl, shooting upward into dusk, growing over its history. Victorian buildings latticed with stone gargoyles stand like scars amongst the dark steel of Gotham’s modern skyline. Every room has its darkness, every character seems to stand in shadow.  As MI points out, some of the scenes evoke the “Grand Guignol,” a macabre French stage show popular in the 1920’s. That’s not to imply there’s horrifically realistic gore, but the nature of the violence, as seen in issue #2 where the tight paneling of Bruce’s fist-fight with the Talon, or the overhead images of Batman performing a holographic autopsy, are meant to send a cold chill down your spine. Snyder and Capullo’s visceral reading experience culminates in issue #5, where we readers must constantly turn and shift the actual book as Batman is devoured by an inflicted delirium while trapped in a labyrinthine dungeon. So far, Batman is one of those titles that demonstrate comic books are still fun and engaging in spite of all the slick replicate formats like video games, movies, and yes, even cartoon shows. Right now the identities and motives of the Court of Owls remain a mystery to me. I really want to know what happens next, so when issue #6 hits the shelves, I’ll be hiding inside MDG’s messenger bag, waiting to take his copy. If you give these first issues a chance, I’m confident you too will want to know the whole story.

You may even find your new favorite pasttime.

* I have the entire set of 1995 Fleer Ultra Spider-Man Cards, including the holoblast and clearchrome cards. Line up, ladies.
**I feel the growing needs to justify this claim in a future Slim Dandy post. Eyes to the sky, true believers.