Of all my incredulous “they’re making that into a movie” moments, one of the most confusing occurred in the lobby of 1000 Van Ness a few months ago when I stared, dumbstruck, at a poster for Ghost Rider: Spirit of Vengeance. Was Marvel trying to give the character a second chance on the big screen, a reboot or reinvention? Was this a Punisher-style replacement of a Dolph Lundgren with a (slightly less awful) Thomas Jane? No, Nic Cage is in this movie. It’s a goddam sequel to one of the worst comic book movies ever made.

This isn’t a terrible problem to have, really. There always have been and there always will be lousy movies. Sturgeon’s Law undergoes constant verification at every cineplex: ninety per cent of everything is crap. So it’s actually somewhat satisfying to know that comic book movies have become so popular over the last decade-plus, that the requisite 90% of bad cinema rolling out of Hollywood on an annual basis contains an ever-increasing amount of capes-n-tights crud. The law of averages simply guarantees more Scott Pilgrims and Dark Knights.

This list focuses exclusively on superhero films. Comic books get unfairly equated with the one genre most prevalent on spinner racks and in specialty stores, but let’s not forget all the other crap flicks that have been inspired by other types of funnybooks. The Spirit was more crime than costume, Dylan Dog more spooky than spandex. Jonah Hex is filed under weird western, Judge Dredd with the silly sci-fi. Cowboys and Aliens is… well, whatever the hell it is, it started out shitty, so any film based on it was bound to be shitty. [Reminds me of a Nick Swardson veterinarian joke: “My cat has diarrhea. What have you been feeding him? Diarrhea.”]

While this list excludes direct-to-video movies, I did opt to be all-inclusive, resisting the temptation to focus solely on comic book flicks released during the recent renaissance. Green Lantern and Fantastic Four… you have been spared.

Even as a kid I knew this movie was stupid. Superman throwing bombs into the sun was silly, but Lex Luthor’s creation of Nuclear Man was downright ridiculous. And this was a film franchise that already upped the goofy ante with Richard Pryor in Part III. Apparently the movie was never truly finished, and aficionados will steer you towards the DVD’s bonus features for insight into the forty-five or so minutes that would have made this the movie it was meant to be. But even if it was meant to be a cheesy eye-roller of a superhero flick with a slightly more intelligible plot, it would have found its way onto this list. The one bright spot here is that it made a young impressionable me feel far less fearful of mutual self-destruction in the Cold War era. I mean, if Hollywood isn’t even taking this seriously, it’s all a big joke, right..?

The one thing that you’d expect to save a movie featuring Marvel’s sexy Greek ninja assassin is a sexy Greek ninja actress. Instead, you get Elektra Natchios played by that Alias dude who looks like Linda Hamilton’s brother. A spin-off of an already lousy movie (Daredevil) created exclusively to capitalize on Garner’s momentary (and unwarranted) popularity, this was the movie that made me abandon attempts at owning every Marvel cinematic effort on DVD. And I buy anything on DVD. I even bought Green Lantern fer crissakes (for the Arkham City dlc, I swear!) The funniest part about my Elektra experience? Already anticipating a disappointing movie (and clearly having no interest in the lead performer), I honestly went to see this on opening weekend because of the announced trailer for… Fantastic Four. I remember leaving the theater thinking, “Well, at least I got to see the Fantastic Four trailer.” Oof.

A few months before this movie came out, Screenlife released its deluxe edition of Marvel Scene-it, the DVD game that incorporates movie clips into its trivia questions. Obviously we bought it and played it, but were confounded by the sheer number of Ghost Rider questions. How were we supposed to answer questions about a movie that no one had seen yet? Turned out, the movie was supposed to have been released in 2006, but it needed some fine-tuning. Obvious red flag. Another red flag? That should have been Nicolas Cage himself. On last weekend’s Weekend Update segment of Saturday Night Live, Andy Samberg (as Nic Cage) “Gets in the Cage” with the real Nicolas Cage. We are reminded that all of his best action films have two key attributes: all the dialogue is either whispered or screamed; and everything in the movie is on fire. It would have been nice if those charming characteristics alone were enough to save this big-screen adaptation of one of Marvel’s B-list superheroes. On paper, it almost sounds like it could work: crazy-ass Cage playing a crazy possessed demon biker. And everything’s aflame. Eva Mendes is an attractive leading lady. What went wrong? Crazy-ass Cage playing a dumb-ass character. And everything’s atrocious: script, acting, and special effects. But Mendes still looks good. 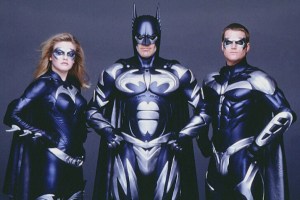 Much has been made of the rubber nipples, enormous crotches, “Batman On Ice” references, and moronic one-liners that helped catapult this turd of a movie to an impressive eleven Razzie nominations in ’97. It also made me hate Joel Schumacher. Interestingly, it took a really godawful film to make a still-impressionable college student consider how much impact a director can have on a film. I didn’t blame Clooney, O’Donnell, Uma (I actually thought she was kinda hot), or even Arnold. Admittedly, Alicia Silverstone took some of the blame. But it was really all about Schumacher. His garish designs, comical action sequences, and dismissal of any kind of storyline killed off the original Batman movie sequence in a Mighty Morphin sulfur cloud. Beginning with Batman Forever, but even more clearly in Batman & Robin, Schumacher seemed to have every intent of reducing the superhero genre to a color-sprayed, meaningless farce.

I didn’t make it to opening weekend for Catwoman. And I’d heard such terrible things about the movie that it was years before I bothered watching it on DVD. This movie isn’t bad in spite of a hot leading lady; this movie is bad because of a hot leading lady. You pour Halle Berry into skintight black leather and prep her for sexy jumping around bits and bendy poses… and it’s a stupid fucking movie? Shame on you. What a sheer waste. I don’t even care that this movie’s connection to the DC character is in name only. Clearly, Gotham City pulled its name from the production sometime during the arbitration war waged by twenty-eight different writers fighting for screenplay rights. Three of the combatants “won” the honor of accepting the Razzie for Worst Screenplay. The best thing to come out of this movie was Berry’s acceptance speech for Worst Actress: “First of all, I want to thank Warner Brothers. Thank you for putting me in this piece of shit, God-awful movie…”

You know… whispering, screaming, and lots of fire doesn’t sound all that bad anymore. There may be some Spirit of Vengeance happening this weekend after all.