My favorite quote regarding San Francisco comes courtesy of Tales of the City author Armistead Maupin. In a piece for a tourist magazine, The Guest Informant, he describes his first visit to the City by the Bay. In 1969, he was a junior naval officer with one day to explore before being shipped off to Vietnam, so he bought a ticket on a sightseeing bus and decided to take in the landmarks.

Minutes later I was climbing into those amazing hills, up where the world is all wind-worn greenery and ivory towers against the blue. There were, I soon learned, no “sights” to be seen so much as a single sight: the City itself – a gilt-edged landscape out of Maxfield Parrish, engulfing as a dream. – “My First Glimpse of the City”

He goes on to advise that the best way to see San Francisco is “to put on your sneakers and start walking.” Maupin’s favorite pedestrian route guides you through a plethora of cinematic landmarks, from All About Eve to Vertigo. This most recent President’s Day Weekend jaunt, however, was inspired by a different kind of landmark: alleys and sidestreets bearing the names of writers who, like Maupin, have literary connections to my hometown.

In typical Top 5 fashion, I present my favorite streets, ranked correspondent to my affinity for the writer (but perhaps influenced slightly by the location of the urban byway in question).

The adventurer and author of novels like Call of the Wild and White Fang is more commonly associated with a city across the bay. Jack London Square is a popular destination in Oakland, even featuring the transplanted and reassembled wooden cabin London lived in while prospecting in the Yukon during the Gold Rush of 1897. He may have grown up in Oakland, but London was born in San Francisco, at a house that once stood near Third and Brannan, not far from this little alley bearing his name.

After the 1906 earthquake, Collier’s Magazine telegraphed the writer and asked him to enter the City to provide an eyewitness account of the disaster.

Remarkable as it may seem, Wednesday night while the whole city crashed and roared into ruin, was a quiet night. There were no crowds. There was no shouting and yelling. There was no hysteria, no disorder. I passed Wednesday night in the path of the advancing flames, and in all those terrible hours I saw not one woman who wept, not one man who was excited, not one person who was in the slightest degree panic stricken. – “Story of an Eyewitness” 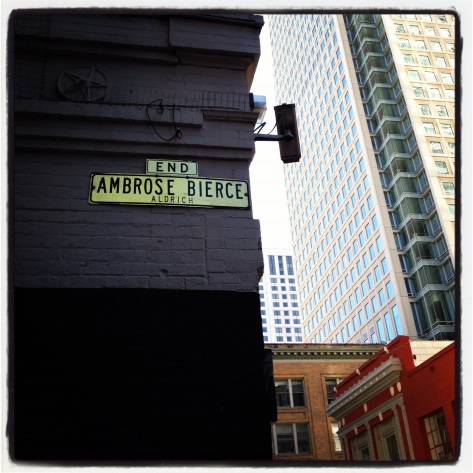 4. Ambrose Bierce Alley, in the Financial District between Market and Mission just off New Montgomery

The native Ohioan and famous short story writer began his writing career in 1866 as a journalist in San Francisco. Although still listed as Aldrich Alley on most maps, this little block-long sidestreet is situated just southeast of the old Hearst Building, home to the newspaper offices that gave Bierce his first bylines. His cynical, pointed commentaries on a town not yet completely removed from the seedy Barbary Coast days of a few decades earlier earned Bierce the nickname, “the wickedest man in San Francisco.”

The Italians continue their cheerful national recreation of stabbing one another. On Monday evening one was found badly gashed in the stomach, going about his business with his entrails thrown over his arm.

The delightful Bierce became progressively more bizarre, later churning out some of the best ghost stories of the late nineteenth century. At the age of 71, he set off for Mexico to accompany Pancho Villa during that country’s revolution and famously disappeared without a trace. Bierce’s final adventure was fictionalized by Mexican novelist Carlos Fuentes in The Old Gringo.

3. Mark Twain Alley, northern edge of the Financial District near the intersection of Chinatown and North Beach

It seems odd that Mark Twain, possibly San Francisco’s most celebrated local author, has the most insignificant and inconsequential of alleys. In fact, it’s not a renamed street or thoroughfare at all, but more of a patch of extended sidewalk off Sansome connecting to the east side of the Transamerica pyramid. Between the “alley” and the building is a patch of urban foliage, or park if you believe the signage, with a fountain that immortalizes the story that put Samuel Clemens on the literary map, “The Celebrated Jumping Frog of Calaveras County.”

Although he never set a story in the City, Twain’s career as a journalist began here, and some of his most witty and charming observations are imbued with a singular San Francisco spirit. [Except, unfortunately, that one quote, which apparently has been erroneously attributed to Twain for years.]

Harry took a cocktail at the Cliff House, but I scorned such ineffectual stimulus; I yearned for fire, and there was none there; they were about to make one, but the bar-keeper looked altogether too cheerful for me – I could not bear his unnatural happiness in the midst of such a ghastly picture of fog, and damp, and frosty surf, and dreary solitude. I could not bear the sacrilegious presence of a pleasant face at such a time; it was too much like sprightliness at a funeral, and we fled from it down the smooth and vacant beach. – “Early Rising, As Regards Excursions to the Cliff House” 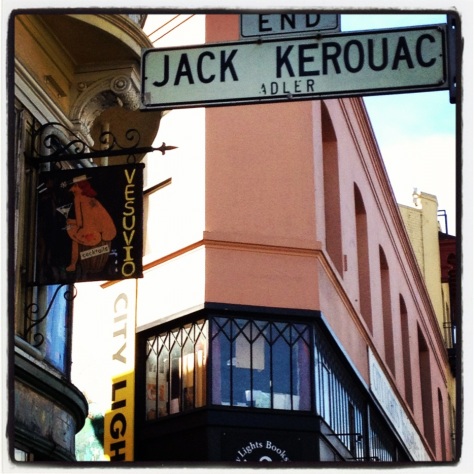 One of the most photographed and referenced poet alleys in the City is ascribed to the writer who may have actually spent the least amount of time here. It’s situated right between Cafe Vesuvio, famous for a legendary Kerouac drinking binge and the Henry Miller rendezvous that wasn’t, and City Lights Bookstore, founded by fellow Beat poet Lawrence Ferlinghetti (and the impetus behind many of the literary street re-christenings, including Ambrose Bierce Alley).

I may never have loved San Francisco more than when I was away from it, spending college nights and days reading, re-reading, dog-earing and annotating On the Road, Dharma Bums, and The Subterraneans. I grew up spreading the “don’t call it Frisco” mantra; I acknowledge today: Kerouac called it Frisco. But, you know… nobody else should.

All those lovely California cottonwoods and eucalypti brooded on all sides. Near the peak there were no more trees, just rocks and grass. Cattle were grazing on the top of the coast. There was the Pacific, a few more foothills away, blue and vast and with a great wall of white advancing from the legendary potato patch where Frisco fogs are born. Another hour and it would come streaming through the Golden Gate to shroud the romantic city in white, and a young man would hold his girl by the hand and climb slowly up a long white sidewalk with a bottle of Tokay in his pocket. That was Frisco; and beautiful women standing in doorways, waiting for their men; and Coit Tower, and the Embarcadero, and Market Street, and the eleven teeming hills. – On the Road 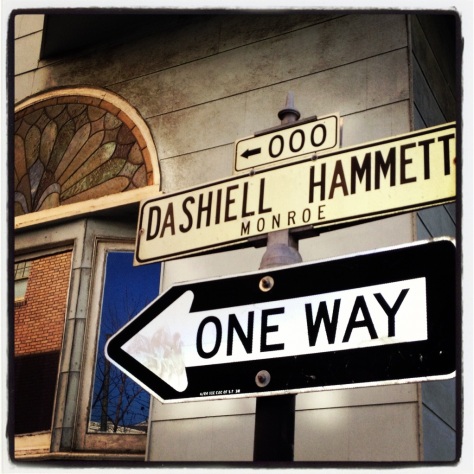 The godfather of hardboiled detective fiction lived at an apartment on Post not far from this street (the only proper thoroughfare on the list) where he wrote his first three novels, The Dain Curse, Red Harvest, and The Maltese Falcon. Sam Spade’s office, in fact, is said to have been inspired by Hammett’s living quarters. The San Francisco Film Noir Festival turned the apartment into a photo set for the cover of this year’s tenth anniversary poster.

As with Kerouac, Dashiell Hammett is not just one of my favorite local authors… but one of my favorite writers, period. All over the City there are stepped pavements that echo with Continental Op footfall and corniced entryways that glow orange from cigarettes dangling from red painted lips.

The deck was deserted. A heavy fog, wet as rain — the fog of San Francisco Bay’s winter nights — lay over boat and water and had driven everyone else inside. It hung about us, thick and impenetrable; I couldn’t see so far as the end of the boat, in spite of the lights glowing overhead. – “The Tenth Clew”

There’s a genuine walking tour in here somewhere. Probably starting near the water with Jack London and working your way counter-clockwise from Bierce, to Twain, to Kerouac, then Hammett. Both the Cartoon Art Museum and Beat Museum, two of the City’s finest tiny galleries, are conveniently en route. So are a fair number of other more acknowledged sights… all collectively representative of Maupin’s single “sight,” gilt-edged and fog-wrapped, a beaten path paradise crammed into a seven by seven treasure map.

Next time: why Fillmore might be my favorite Street in town.