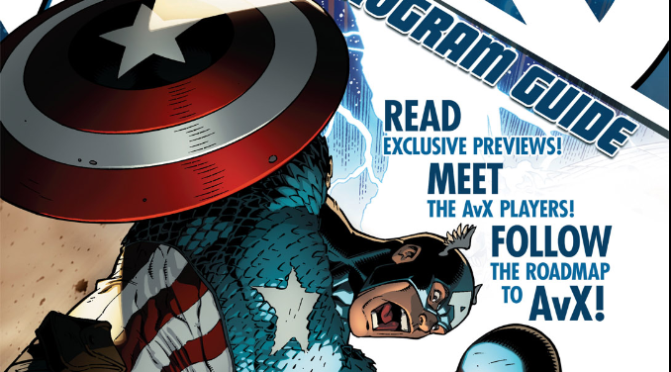 The Institute’s comics department spent a lot of time on the latest DC event. Maybe a little too much time, to be honest. Luckily, Marvel’s big blockbuster event is just a few weeks away. Grab your Cap shield or Cyke visor and RSVP for a launch party, True Believer, because Avengers vs. X-Men promises to be the best superhero summer slugfest since Civil War. You already weighed in on the standalone bouts via Ghostmann’s post a few weeks back, but now that we’re ticking closer, and the pieces are starting to fall into place, Marvel has gifted us with this free AvX Program Guide, featuring scorecards, background details, and previews. The physical book is available at any retailer already signed up for a launch party, or you can download the guide for free on digital readers like comiXology.

The last time I got this excited about a Marvel crossover spectacle, we hosted our “Who’s a Skrull” pool to coincide with Secret Invasion. That event was mediocre at best, and the Skrull reveals started losing steam by the third issue. Greg Smith won a pile of wagered nerdloot and Google Groups unceremoniously deleted our Invasion page. But now we’re in a better place, with renewed vigor for superfluous internet content, and we’ve got a much better title bout with which to coordinate a proper contest. Check out the program guide, and then check back here soon for the official Idle Time ballot.

But before that happens, and especially if you’re still shrugging your shoulders over that Skrull nonsense… here are the Top 5 reasons to get excited about AvX.

Does anybody remember the first time Marvel did this? I do. It was 1987 and this four-issue miniseries was going to be the best thing in my life. I read the hell out of it. And even for a middle-school kid who was interested in little more than superheroes smashing into each other and blowing shit up, this title was a dud. So much so, it seems, that Marvel is pretending like it never existed.

But this was back in the day when X-Men was king of all team books. Chris Claremont had successfully turned Stan and Jack’s foundering creation into the only four-color must-read monthly in a sea of black-and-white independents. (Then he did it again, along with Jim Lee, a few years later.) This wasn’t really a which-team-is-better battle, but a piece of the concurrent X-Men/Magneto storyline. I was the Avengers supporter in my little trio of comics geeks, and I was already sick and tired of Dave Ogawa’s (justified) bragging about how much better his X-Men books were. (The only one who had it worse was Mark D’Acquisto: The Fantastic Four hadn’t been readable for years.)

Now, both teams have pop culture clout. Thanks to a revitalization of the comics spearheaded by Brian Michael Bendis, as well as big-budget Hollywood magic (and the best superhero movie ever in the form of Captain America), people know Iron Man, Nick Fury, and Thor. The Avengers are just as important as The X-Men. When this event hits shelves, I expect heated debates, genuine conflict, and divisive feuding that will rock the Institute down to its very core. Kinda like how we rank our favorite albums every year. It’s going to be great. 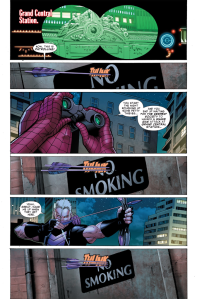 Who’s this douchebag masquerading as Clint Barton in recent pages of Secret Avengers and Avenging Spider-Man? Not Hawkeye. The Hawkeye I’ve loved since I was a kid doesn’t need to prove himself to anyone, not even Captain America. Clint Barton more insecure than Spider-Man, the poster boy for self-doubt? Please.

Just because you’ve re-branded the guy in a new costume (anybody else miss the ol’ purple v-mask?) doesn’t mean you change his history. Marvel compresses past events; it doesn’t hit the reset button. This isn’t the DC Universe, folks. Clint’s captained the West Coast Avengers, Force Works, and the Thunderbolts. He may be mildly impetuous and cocky, but he’s not a chump. He was the guy asked to pick up Cap’s shield after the Steve Rogers assassination.  He was an utter badass during the Skrull invasion. And no one has done a better job developing Hawkeye’s character over the last few years than Brian Michael Bendis. Thank Christ he’s onboard with the “brain trust” and not the two Bartonhaters writing these other two rags.

Of course, there is a faint possibility that this new characterization of Hawkeye is the result of an editorial decision… perhaps to correlate with Jeremy Renner’s rendition of the character in the upcoming Avengers flick. And if that’s the case… I’m frightened.

3. Here’s a plot point we can all get behind: Phoenix. 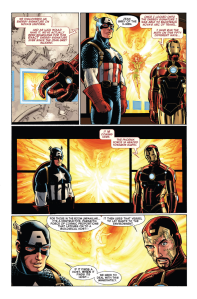 Whether you were onboard for Dark Phoenix in the 80’s, privy to the cartoon rendition in the 90’s, or were introduced to the Jean Grey drama via Famke Janssen’s tragic end in X-Men: The Last Stand, you know something about this Phoenix business. Chris Claremont and John Byrne created what is arguably the greatest Marvel storyline ever when they sent the X-Men on the now-classic adventure from the depraved ballrooms of the Hellfire Club in New York City to the cosmic grandiosity of the Shi’ar Imperium. No matter which version you’re accustomed to (even in the canonical comics continuity in which we’ve already been privy to one rebirth and redeath of Jean Grey), you know how the story ends. So you can appreciate the gravity with which Iron Man says the lines, “The Phoenix Force is headed toward Earth.”

The build-up for this storyline has been years in the making. Since House of M put the future of mutantkind in jeopardy, and Hope Summers arrived on the scene bearing an unmistakable (and often unspoken) similarity to the dearly departed Jean, X-fans have been expecting something along these lines. There doesn’t seem to be anything overtly confusing or mysterious about the contention in this summer’s event: the Phoenix Force is looking to make Hope its host. The X-Men will protect her; the Avengers “will need to deal with this immediately.” Game on.

2. What do all the best Marvel stories of the last decade have in common? The AvX “Brain Trust.” 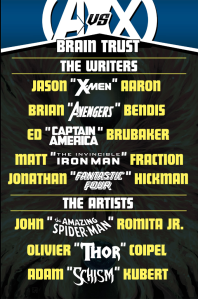 Individually, these writers have already penned some of the best conflicts, storylines, and events in recent memory. But they’ve also misfired a few times. What’s going to make this event different?

Bendis gaves us Avengers Disassembled and House of M, which, in many ways, seems to have sown the seeds for AvX. He was also chief architect on some pretty tedious books like Secret Invasion and Siege. Matt Fraction and Ed Brubaker helped bring the X-Men to San Francisco, introduced us to Vulcan, and orchestrated some of the best Captain America and Iron Man stories ever conceived. Buuut they also missed the mark on last year’s Fear Itself.

The best events are the product of great plot orchestration, not simple issue-by-issue scripting. Like a great television series, an exciting storyline requires lots of hands in the planning and production.  “Too many cooks” my ass. Make this a feast to remember. If this is the last batch of comics I ever read, I can’t think of a better Last Supper.* Marvel dubbed this the biggest comic book event ever, and this talented group of storytellers creates little room for doubt. Take those three previously mentioned architects and include Jonathan Hickman, who has made Fantastic Four not just readable, but a top-of-the-weekly-pull priority. Hell, they even gave him a second FF book (called, actually, FF)because the series had been that good.

One more, for good measure: Jason Aaron. His Scalped joins Preacher, Y, and Sandman as one of Vertigo’s best epics. His arrival in the Marvel fold (and subsequent rise to X-universe primary) is something akin to finding out that Grant Morrison was going to be writing JLA. Last year’s Schism was great, but it just felt like a teaser. Now we know why…

Bottom line, the number one reason to check out Avengers vs. X-Men is right there in the title. The best Marvel characters, all in one mighty rumble. It’ll be the greatest action movie you’ve ever read (a phrase I used to reserve for Mark Millar’s second Ultimates series). Civil War left out the X-Men; Age of Apocalypse was a mutant-only party. They’re all here for this showdown, though, and the grandiose billing and mountain of hype actually comes with a creative team capable of making it a classic. 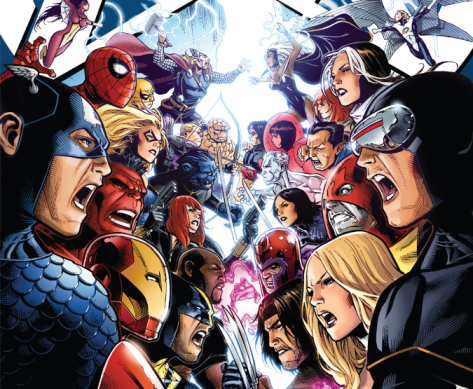 *forgive the hyperbole, but I was chasing a metaphor. I’d actually be pretty devastated if this had to be the last comic I ever read, but I’m a sucker for a spectacle, and this doesn’t get much more spectacular.