Plot: Next time you see a falling star be careful, it could contain a gelatinous alien that eats everything in its path as it grows! Poor old farmer Ted didn’t know, and when he spots a meteorite falling into a nearby field he heads over to check it out. The old farmer is attacked by the alien and it tries to eat off his hand. Two teenagers, Steve Andrews and his girlfriend Jane Martin, run across the farmer and take him to Dr. T. Hallen. After the doctor treats the blister, he thinks it would be a good idea to send two kids to go back to the scene of the attack and investigate this “blob” (uh hey dumb ass, what about calling the police!). Well when Steve and Jane return to the doctors office after checking things out at the field, they find the Blob chowing down on the good doctor. Steve and Jane try to warn the police and the townsfolk but everyone thinks they are crazy. Meanwhile the fucking Blob engulfs half the city and it’s population.

Fun Fact: The actual Blob, a mixture of red dye and silicone, is still kept in the original five-gallon pail in which it was shipped to the production company in 1958 from Union Carbide. It was put on display over the years as a part of the annual Blobfest, held over a three-day period each summer in Phoenixville, PA, which provided a number of the shooting locales for the film. In addition to displaying the Blob and miniatures used in the shooting, the event features a reenactment of the famous scene in which panicked theatergoers rush to exit the town’s still-functioning Colonial Theater, as well as several showings of the film.

Classic Quote: “Doctor, nothing will stop it!” – Kate, the nurse [after throwing acid on the Blob]

Creature from the Black Lagoon (1954)

Plot: After doing research for this Horror Guide Series, I’ve come to the conclusion – scientific expedition teams searching for fossils or artifacts is probably one of the most hazardous jobs ever! I mean it never fails – there they are just hanging out in a tomb, or in the case of this movie, a Black Lagoon, digging up some old relics when SUDDENLY a crazy-ass monster attacks them and kidnaps the one hot girl that’s in the team! The hot girl is usually the girlfriend or fiancee of the team leader and it’s up him and the rest of the team to rescue the hot researcher and kill the monster. Sounds like a great job.

Fun Fact: Ricou Browning, a professional diver and swimmer, was required to hold his breath for up to 4 minutes at a time for his underwater role as the “Gill Man.” The director’s logic was that the air would have to travel through the monster’s gills and thus not reveal air bubbles from his mouth or nose. Thus, the costume was designed without an air tank. In the subsequent films, this detail was ignored and air can be seen emanating from the top of the creature’s head.

Classic Quote: “We didn’t come here to fight monsters, we’re not equipped for it.”  – David Reed

Plot: Okay dudes, if you ever run across a Doctor, teacher, boss, construction worker, Starbucks barista, with the last name of FRANKENSTEIN! just keep walking man. Because at some point that person is gonna want to resurrect the dead and dig up bodies – and you know where that leads to? Yeah, not good. Once you start down that road you’ll no doubt find yourself speaking lines like this, “I must find the perfect brain!” It’s a one way trip to loonyville. You’ll start bringing dead puppies back to life – or maybe some goldfish and squirrels. Nothing will be safe from your maniacal ways.

Fun Fact: The original concept for this film was a black-and-white feature with Boris Karloff as the Frankenstein monster. Universal threatened a lawsuit if Hammer copied any elements from the classic Universal version. Hammer had Jimmy Sangster completely redo the script and had Jack Asher shoot it in Eastmancolour.

Plot: Jonathan Harker travels to Castle Dracula to help the Count catalog his vast library – you know, books on how to suck blood and shit like that. But what Count Dracula doesn’t know is that Harker is secretly on a mission to kill him. But dumb ass Harker takes his sweet time getting out the wooden stakes and by then it’s too late because Dracula has already sucked the dudes blood – goodbye Librarian, hello life of the un-dead. And if getting turned into a vampire wasn’t bad enough, Dracula sees a picture of Harker’s fiancee, Lucy Holmwood, and decides he needs to tap that ass. Dracula heads into town in his best cape and starts to visit Lucy at night in her bedroom. Soon Lucy is all used up and Dracula sets his sights on one of Lucy’s friends, Mina. What a pimp! But Dracula’s cock is soon blocked by one Dr. Van Helsing.

Fun Fact: The cape worn by Christopher Lee was discovered in 2007 in a London costume shop during its annual inventory-taking. It had been missing for 30 years, and is believed to be worth around $50,000 (US$). Lee was contacted to verify its authenticity.

Plot: You ever wish you could just teleport places instead of having to drive there? Or take the train or jet plane? I mean how cool would it be to step into a transporter box and one second you are in California and the nest you are chillin’ in Japan? Fucking awesome! Whats not awesome is that you would have to bring a can of RAID with you every time you step in the transporter and spray the hell out of it – otherwise when you get to Japan you might be barfing up on your sushi roll to slurp it up through a straw.

Fun Fact: Michael Rennie was offered the title role but declined it because his head would be covered thru most of the picture.

Plot: Professor Henry Jarrod has the talent to make extremely life-like wax sculptures (now there’s a lost art form). His favorite subjects are historical figures such as Marie Antoinette or Joan of Arc, but his business partner Matthew Burke, wants him to start making some more horrific wax sculptures – like a chamber of horrors and shit. When Jarrod refuses to do such sculptures, Burke sets his wax museum on FIRE and collects the insurance. What a fucking dick! Well, everyone believes that Henry Jarrod died in the fire but he unexpectedly reappears some 18 months later when he opens a new exhibit – and guess what motherfuckers, this one DOES have a chamber of horrors. Guess who Henry is inviting for opening day? That’s right – Burke the Jerk.

Fun Fact: Warner Bros.’ first 3-D movie, filmed by director André De Toth – who was blind in one eye and hence could not see the effect.

Classic Quote: “It’s sort of a shock to see your head detached that way. ” – Sue Allen

Plot: This was like the 1950’s version of the T.V show “Big Brother” – Let’s put five people in a  haunted house with ghosts that kill the shit out of you, and see which one survives!  The winner gets $10,ooo bucks! Sweet. Your hosts for this ghoulish spectacle are Frederick and Annabelle Loren – who really have no intention of paying any of these idiots, but hey, they don’t know that. One of the contestants, Mr. Pritchard, is a ghost expert know-it-all and tells everyone that there are seven ghosts. Not 6. Fucking 7. How does he know this? Just count the ghosty orbs fool…. ghosty orb 1, ghosty orb 2, ghosty orb Tims!  As the guests continue to be frightened and threatened, two have their own very specific reason for being there and not everyone will live through the night. No shit.

Fun Fact: The Ennis Brown House in Los Angeles, designed by Frank Lloyd Wright and built in 1924, and now listed on the National Register of Historic Places, was used for the exterior shots of the haunted house during the film’s opening sequence.

Classic Quote: “It’s almost time to lock up the house and then your party will really begin. I wonder how it will end… ” – Frederick Loren 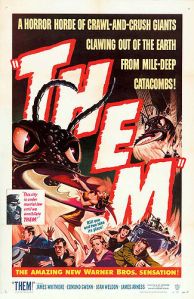 Plot: After several people in the New Mexico desert wind up missing or dead, including an F.B.I. agent and most of his family, police Sgt. Ben Peterson teams up with F.B.I. agent Bob Graham to find out what’s causing the strange occurrences. And do you know who they find out that did it? Mexican Drug Cartels? Serial Killers? Satanic Cults? Nope, giant motherfucking ANTS!  Turns out the ants over at the Atomic Testing site in Los Alamos got exposed to all the radiation from the bomb tests and got all huge. Thanks a lot Einstein, Oppenheimer, and Heisenberg. Well they manage to destroy the nest of ants and save the day, but then they see two ants with wings fly off to go fuck and make more baby giant ants, hell bent on destroying the world!

Fun Fact: The sound that the giant ants from “THEM!” make as they approach their prey is a recorded chorus of bird-voiced treefrogs (Hyla avivoca) of the southeastern United States. Occasionally a grey treefrog (Hyla chrysoscelis) can be heard on the soundtrack as well, as these species can often be heard together at the same wetland.

Classic Quote: “We may be witnesses to a Biblical prophecy come true – ‘And there shall be destruction and darkness come upon creation, and the beasts shall reign over the earth.'” – Dr. Harold Medford

Plot: Members of an American scientific research outpost in Antarctica find themselves battling a parasitic alien organism capable of perfectly imitating its victims. They soon discover that this task will be harder than they thought, as they don’t know which members of the team have already been assimilated and their paranoia threatens to tear them apart. Then then some dudes chest opens up into a mouth and chomps off the doctors arms then they blast the alien with flamethrowers and the aliens head detaches itself and scrambles across the floor….. uhhh.   oh wait, shit wrong movie.

Fun Fact: The scene in which The Thing is doused with kerosene and set ablaze is believed to be the first full body burn accomplished by a stunt man. Veteran stunt man Tom Steele replaced James Arness in the fire scene. Steele wore an asbestos suit with a special fiberglass helmet with an oxygen supply underneath. He used a 100% oxygen supply which was highly combustible. It was pure luck he didn’t burn his lungs whilst breathing in the mixture.