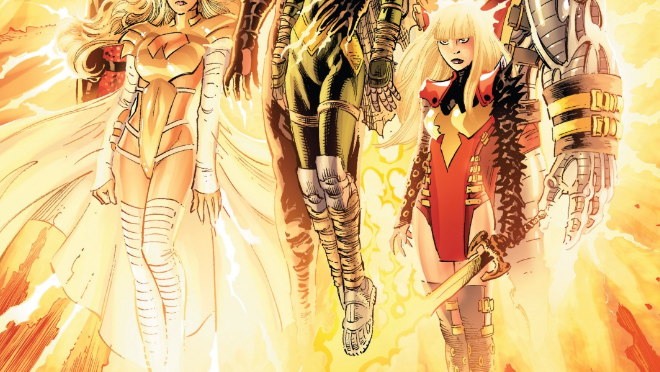 Didn’t we make that an option? Didn’t we say that “Phoenix force inhabits someone other than Hope” should be a predictable plot twist? No, reviewing the original ballot, clearly we did not. Why? Because of that previewed New Avengers cover with Iron Phoenix Phist. Oh yeah. So blame Danny Rand. Otherwise… we would have had three scoring opportunities this week!

I’ve become a big fan of Kieron Gillen over the last year or so. His work on Uncanny X-Men and Journey Into Mystery last summer were the highlights of an otherwise forgettable Fear Itself event. In the newest Avx tie-in of Uncanny, he’s finding ways to connect the “lights” of his Generation Hope, as well as the menacing Unit character from his sorely missed S.W.O.R.D. series, to the developing Phoenixmageddon.

Over in the pages of Academy (thus far the lamest of the tie-ins), a bunch of super-powered kids demand to be taken seriously by their judgmental guardians and prove that just because you’re young, that doesn’t mean you’re incapable of making responsible decisions. Oh, and there’s nothing in the whole world harder than being a teenager. And no one truly understands me and my parents hate me. Surfing is cool and we’re all about being edgy and aloof. Utter crap. Wonder who the target audience is for this rag? Buuuuut… it does give us our first plot twist scoring chance since week 5. Juston Seyfert and his salvaged Sentinel robot are officially ordered to “fight” the “escaping” X-Babies in this issue. He’s a student of the Academy, so judges rule: The Avengers deploy a Sentinel.

Finally, in the main book, what is formally being titled the conclusion of Act I, the Phoenix force makes contact, ignores the tainted Hope, and sets up camp in five of the most annoying X-Men. We may not have allowed for a “different host” eventuality, but we did create the two or more characters get new costumes plot twist, and five is certainly more than two.

Special recognition to Patrick O. who was the biggest climber: predicting both of this week’s plot twists, he rocketed up ten points to find himself in fourth place, just a point back from the three leaders.