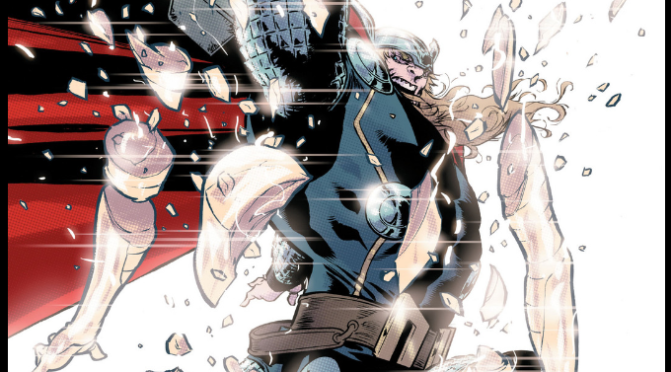 At what point will someone be bold enough to validate Marvel’s advance press declaring Avengers vs. X-Men the greatest comic book event of all time? How has it stacked up against Civil War, for example, which sits atop my personal list of major superhero blockbusters? Obviously proper assessments must be reserved for the conclusion of the event, but thus far there are two key factors of interest. First, as with Civil War, my summer Wednesdays are spent in anticipation of plot twists and story developments. What will happen when the Phoenix force reaches Earth? Can Spider-Man hold his own against Collosanaut? At what point will a B-list hero experience his or her requisite dramatic (albeit temporary) death? This book, and its crossovers, have provided plenty of shocking turns. Secondly, however, and unlike Civil War, it’s been those crossovers and tie-ins that have been providing most of the weekly excitement.

Case in point: Jason Aaron and Nick Bradshaw bring the Shi’ar – X-Phoenix fight to Earth in the latest Wolverine & The X-Men. I suspect that Aaron’s writing, coupled with someone like Bradshaw, whose Art Adams-inspired detail and energy may be resulting in the best X-art since Alan Davis, might have made me feel differently about the first six issues of Avengers vs. X-Men (there: I’m officially done apologizing for JR, Jr.) In this week’s New Avengers, Earth’s Mightiest garner more sympathy from readers on the fence, while Danger proves to be the biggest synthetic bitch in the Marvel U (and in a world with Pretty Persuasions in it, that’s saying something). Finally, in the AvX: Vs. tie-in, Brandon Peterson draws the hell out of a Daredevil-Psylocke bout (salvaging shitty scripting by Rick Remender) and Kaare Andrews produces a beautifully stylized smash-up (literally) between Frost-Phoenix and the God of Thunder.

I’m not saying I don’t like the main series… because I do… But I am saying my weekly enthusiasm for this event is strengthened by the fun I’m having reading the tie-ins.

Leaders through week 15 are unchanged from week 13.