Growing up, winter break meant candy and soda-fueled all-nighters at my cousins’ house in Marin playing Nintendo, reading comics, and covering every available surface with gameboards, cards, and plastic tokens. Today I have boardgame boxes occupying major real estate in three different closets, and I’ve spent significant time of late burning the midnight oil over lengthy Descent and Talisman sessions. But you never forget your first… Or your fifth, for that matter. Mom cleans out closets like nobody’s business, and if it seemed old, underused, or even slightly neglected, out it went.

Before I set up another fleet of Rebel starships in an Armada showdown, I feel the need to reflect upon five games that I haven’t owned or even seen in decades… but that still tug at my heart. 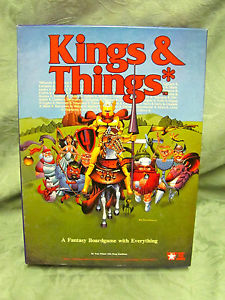 Kings & Things ca. 1987
I was a Games Workshop junkie in middle school. I bought White Dwarf regularly, cut-and-pasting together my own Warhammer cards from its glossy pages, and maintaining a tackle box full of (poorly) painted lead miniatures. I wanted to play every new boardgame that hit the shelves of Gamemasters on Clement St., but after blowing most of my saved allowance on comics and baseball cards, I was too often relegated to the back-of-the-store sale section. This turned over some turds like Judge Dredd and Blood Royale (which may have been fun, in retrospect, but far too complex for a teenager). Then came the day when this little gem fell into my lap.

Kings & Things declared itself a “Fantasy Boardgame with Everything,” and it wasn’t kidding. This box was FULL of cards, pieces, board tiles, and those tiny square pain-in-the-ass cardstock tokens that GW used to love. But the greatest thing about the game, for me, was discovering the ever-changing playing surface generated from random hexagonal tiles. I don’t know if this was the first time this mechanic was employed, but it was certainly my first experience. And I loved it.

Current fate: Unknown, presumably disposed of during one of the off-to-college purges.
Play it again: There are a few sellers on eBay, including this bloke in Delaware who has a near-mint copy for fifty bucks.
Similar current game: Although Kings & Things was reprinted by a European publisher, that version is also out of print. Luckily there are many fine modern games that employ the random tile-generated board. My favorite? Carcassone. 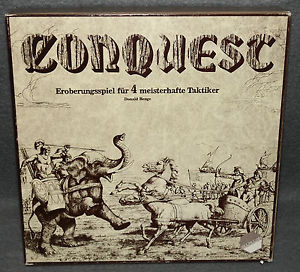 Conquest ca. early 1980’s
One of the first two-player strategy games I was exposed to, during one of those aforementioned December mini-vacations at my cousins’ house in Novato. The game belonged to my uncle, and I still have a vivid recollection of the dusty, broken box and the heavily creased board. In many ways it operated like chess – movement was diceless and the goal was to capture your opponent’s pieces. But chess seemed so stodgy and lifeless to a young me, and I avoided playing it, or even learning it, as long as I could. Plus, in Conquest, you could stack your little warriors on elephants.

As it turns out, the designer of this game, Donald Benge, was similarly enamored with the idea of livening up the ancient game of chess, and that may have been the inspiration for Conquest. A few years before his tragic death in a car accident, he devised updated versions of his classic creation entitled Conquest Plus and Grand Conquest, which employ additional pieces and a wider field.

Current fate: I recently asked my cousin if he thought his dad still had the game. Since they moved back to San Francisco some years ago, however, the suspicion is that the game is long gone.
Play it again: The game was popular enough that it enjoyed a lengthy print history. If I wanted the original edition – in the box that I remember opening – I’d need to fork over close to a hundred bucks on eBay. However, one of the many subsequent editions of the two-player version are available through BoardGameGeek’s resale marketplace for under forty bucks.
Similar current game: I’d love to try Grand Conquest, but thus far it’s only been released in Germany (with German instructions) and costs a pretty penny to get stateside. Pirateer has a similar feel, but the real one-on-one, move-and-conquer experience I think is best replicated in the Star Wars Armada game. The one notable exception, of course, is that Armada uses dice. A LOT of dice. 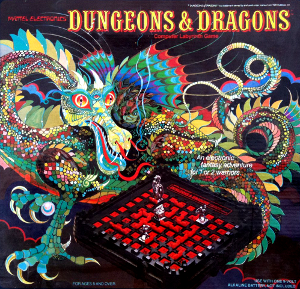 Dungeons & Dragons: Electronic Labyrinth ca. 1981
When I was in kindergarten, my folks sat me down and explained very matter-of-factly that Santa Claus doesn’t exist. A few Christmases later, I was back in Novato on Christmas Eve, dutifully keeping mum on the whole St. Nick thing. My younger cousin was still a firm believer, and insisted that we be asleep before 10:00 lest Santa turn his sleigh around. Whatever. But then, come Christmas morning, something magical. My cousins got their usual shiny hillock of candy and gifts, but there was an additional pile over there to the left of the fireplace… and it had my name on it! Not only did Santa exist, but he knew how much I wanted this crazy electronic labyrinth game.

Before I understood what Dungeons & Dragons roleplaying was all about, I knew D&D was awesome, based on this game alone. Players could take turns setting up the invisible maze, or you could play against the computer and its randomly generated network of walls and secret doors. I can still hear that creaking door, the dragon klaxon, the treasure chime. It was positively exhilarating. And, best of all, it was simple enough for a first-grader to grasp, but fun and engaging enough to maintain life throughout my grammar school years.

Current fate: This game’s death knell coincided with my first discovery of battery corrosion. At the time I didn’t think too much of it. Irreparable. Throw it away. Now, years later, I wish I had at least tried to resuscitate the game.
Play it again: There are a good number of these on eBay, but very few promising that they’ve been battery-tested and are in working order. For twenty-five bucks plus shipping, however, I can snag it from this seller (albeit seemingly missing some wall pieces).
Similar current game: Although I haven’t played it yet, Electronic Labyrinth seems to have a similar ease-of-play and straightforward objective. Really, though, I think I’d rather just find a working vintage D&D game.

Talisman, First Edition ca. 1985
Still one of my favorite games in any medium. I bought this at Gamemasters during my Games Workshop phase and it quickly became an any time of year, all-nighter staple. It blended a little bit of strategy with a lot of luck and featured the kind of rudimentary character-building that has made generations of computer RPGs so popular. The idea that there was no single path to follow, that players quested around the perimeter of the board until sufficiently prepared to challenge further, felt so fresh and exciting.

Then it got more exciting. On a family trip to Italy in the summer of ’88, I found a copy of the second edition of Talisman in a game shop in Firenze. My parents would never have condoned dropping fifty bucks on a boardgame back then – whether or not they were even paying for it – except I handily played the souvenir card. My little brother was into this weird statuette phase, buying heavy-ass little figurines from every town on our stop. He was hauling back a small fortune in carved marble. So when I explained that all I wanted from our trip was this Talisman game (“It’s not even Italian!” “Well neither is Matt’s bald eagle in flight!”), they acquiesced. The game, made in England, came with a rules insert that translated every card (and, if you haven’t played Talisman, realize there are a ton of cards) into Italian. So my first second-edition game session came against my uncle, spoken half in English and half in Italian.

I still have that old Talisman game. It’s one of the few boardgames to have survived the various purges. With it are all the crazy expansions and hand-crafted White Dwarf cards that I had assembled along the way (including the ludicrous but outrageously fun Timescape expansion). However… I don’t play it any longer. And that’s only because I’ve been busy playing Fantasy Flight’s latest incarnation of the game, the fourth edition. They’ve actually surpassed the original GW line in number of characters, additional boards, and card types. They don’t however, have a Timescape…

Current fate: After coming back home with that 2nd edition Talisman, I bequeathed my 1st edition to a buddy. I’d like to believe he still has it.
Play it again: If I really wanted that original game, for nostalgia’s sake, I could shell out 100 bucks on eBay.
Similar current game: But, really… there’s no need. I’ve shelled out three times that building my 4th edition collection. And if I ever really feel the need to be transported back to ’85, I just play as the Dwarf.

Dark Tower ca. early 1980’s
This is the ultimate cult classic among fantasy boardgame aficionados. And I knew, even as a little kid, that I was unwrapping a treasure that Christmas Eve. The primary device, the Tower itself, was a weighty plastic tower that rumbled, spun, and came to life with ominous lights and sounds. Even without the board component, which I can scare recollect, I used to play the game by memory alone, plotting out my assault on the Tower and keying in moves without worrying about mapped references. I learned what a brigand was; developed a healthy fear of dragons; and willingly transported myself, tented under bedsheets in the dead of night, into a suspense-filled game of sorcerous solitaire.

Of course it was wonderful. Even Orson Welles endorsed it.

Current fate: No idea. My folks knew how much I loved the game and, even though the pieces and board disappeared even under my watch, the Tower itself hung around for years. People still ask about it.
Play it again: Good luck. I’ve seen used copies on various re-sale sites ranging from $300 (may or may not work) to $800 (tested and in working condition). I’m content to let in live on solely in memory.
Similar current game: Nothing. There will never be another Dark Tower.