Most importantly; CLEGANE BOWL IS ON, BABY!!! “The Broken Man” brings back everyone’s favorite anti-hero, Sandor Clegane, aka The Hound. Will he get a chance to reclaim his honor and defeat his Franken-brother, The Mountain?

I have to say I was pretty disappointed with Arya this week. She decides to tell the Faceless Men to go pound sand, and then just skips across Braavos looking for a ship to sail back to Westeros? Arya, you already know the Waif has it out for you and can mimic literally anyone’s appearance. A girl needs to keep her guard up! Because when you don’t keep your guard up, you get stabbed in the abdomen and thrown off a bridge.

Briennes over Bronn only scored one point, but it was a big point. Finally scoring for his namesake, we got the first appearance of Bronn. The Big Three (Jon, Sansa, and Davos) weren’t able to do much in the way of bolstering their forces, leaving Sansa to call upon Littlefinger(?) and get the Knights of the Vale on her side.

Meanwhile, Theon and Yara are posted up in Volantis with their fleet, happy to be away from the gloomy Iron Islands and their huge-lunged uncle Euron. Well, at least Yara is.

Margaery makes it clear she is still on Team Tyrell after passing her secret note to Olenna. After seeing the post-show teaser for the next episode, it looks like whatever Margaery has planned might finally come to fruition next week.

Only three episodes left. We’re now on the home stretch. We’ve still had no Sand Snake sightings, or heard literally anything from Dorne for that matter. However, I wouldn’t count them out. I’m expecting the Martells to make a surprise appearance in the series’ historically insane penultimate episode. You heard it here first! 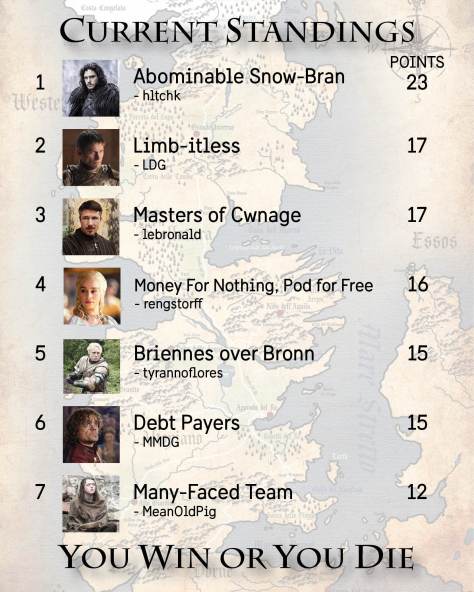 Full scoring update is below.