The first issue of She-Wolf, Rich Tommaso’s new Image series, hits stands this week. Gabrielle Catella, teenage wannabe witch, may or may not have successfully cast a shapeshifting spell on herself and now, in addition to dealing with all of the problems that come along with being a rebellious misunderstood eighteen-year-old, she prowls the suburban night as a werewolf, endangering boyfriends and catching hell from parish priests.

Like his previous Image book, the neo-noir Dark Corridor, She-Wolf puts Tommaso’s gorgeous linework and color palette on display. Upping the ante on the Paul Grist-inspired artwork that helped populate that prior book, we’re treated to a spooky dash of Richard Sala, with some of the pop art vibrancy of Gary Panter. Tommaso hit my radar after working with master storyteller James Sturm on Satchel Paige, and I’m excited for anything he’s working on. And what he’s got going on in this first issue is a lot of surrealist witchcraft and creepy Little Red Riding Hood symbolism. Werewolves are so much cooler than vampires or zombies, obviously, so let’s all move this book to the top of the pull list.

And speaking of Dark Corridor, you can double your Tommaso pleasure this week, as the TPB collection of the entire series has just been released. Red Circle is Tarantino’s L.A., with just a few more hot rods and just the right amount of flayings. Tommaso seems to really love drawing interior body parts. Enjoy!

Comics legend Alan Davis takes over as the new artist on Totally Awesome Hulk #7. It’s been eight months since the end of Secret Wars, and we’re all pretty curious about what’s really going on with Bruce Banner. This new arc promises insight. Now, still waiting on news on half of the Fantastic Four… 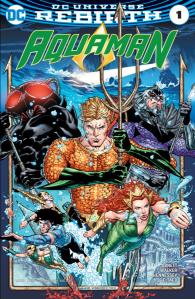 Aquaman #1
This is hands down the best pilot of the reboots. In a short time this book reintroduces an unrest in the Atlantean caste system that is breeding seccessionist terrorists, while mentioning the distinct cultural challenges Aquaman faces as a land-baby ruling the oceans. They pause for a meta-moment to acknowledge the challenges that have thwarted Aquaman’s popularity, but as they press on, the story becomes compelling in its own right. This book not only has mounted prehistoric sea creatures and a cool chase scene, it’s got an ominous Black Manta appearance! Top that off with an insightful conversation with your cool mere-wife in a hokey seaside restaurant, and you’ve got me sold. I wanna see this arc all the way through. – RF