As part of our Ultimate Playbill project, each week a faculty member will take the time to extol the virtues of one of the beloved films on this list. This week, I tackle djlazybear’s #3 pick, Inside Llewyn Davis (2013).

Defining yourself is no easy task. One often finds themselves during a course of hardship in their life and uses the experience to paint a much clearer picture of their ideal self. The Coen Brothers have made it their mission with their films to shatter this idea and show people trapped in their cyclical natures.

With Inside Llewyn Davis, the Coen Brothers made their cruelest film showcasing this point. While some may argue for No Country for Old Men (2007), that film actually ended on a note that people still have a fire in them. Inside Llewyn Davis has none of that and remains a ton more relatable than No Country to the average person caught up in the same cycle.

Using the early 1960’s New York – Greenwich Village folk scene as a springboard, the Coens leap into the frustrating tale of Llewyn Davis (Oscar Isaac) and his inability to break through musically, financially,  and through his own depression.

Davis, in part, is based on real life folk community hero, Dave Van Ronk. In reality, Ronk was categorized as a very nice man who never took off on his own but was well respected and adored by everyone around including Bob Dylan, Joan Baez, and Joni Mitchell.  The Coens instead use this as the breeding ground for a bitter and jaded protagonist that is Llewyn Davis.  He feels like anomaly or ghost even  in this world . Though talented, he never has the marketability of his peers is never recognized as an individual talent.

Llewyn has trouble recognizing himself as an individual talent too. Once part of an up and coming folk duo, he recently lost his partner, Mike, when he jumped off the George Washington bridge. Stranding Llewyn seemed to have wrecked him as he appears to have lost all confidence in his ability and humanity. He tells friends, the Gorfeins, who let him crash at their apartment and feed him to fuck off for humming Mike’s parts. He’s in deep mourning and wrestling with the fact that he may have been best as part of a duo. Maybe he can’t exist on his own and everything around him seems to be supporting this fact. Basically his world has turn to shit. 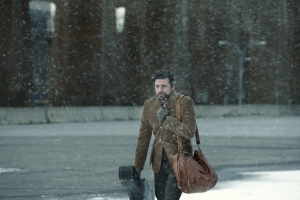 muddled browns and faded colors  populating the world.  It’s strange that the Coens subbed in Delbonnel since they usually work with Roger Deakins but I understand his camera work to be much more dynamic with a lot more colors that I don’t know would have worked in this film. Delbonnel paints the world as being slightly off with Llewyn as the only strong color.

The Coens also handle plot in a way that wouldn’t work for a lot of other filmmakers as Inside Llewyn Davis doesn’t so much have one. We get to spend a few dreamy days with Llewyn after he gets his ass kicked by an unknown man in an alley for heckling the man’s wife the previous night. Llewyn seems broken but he gets back up and tries to maintain what little of a life he has left.

That’s what the rest of the film is like as well as we watch Llewyn move from couch to couch and deal with a new problems including: getting yelled at by John Goodman, getting abortion money for a secret lover, a catatonic incontinent father,  and so much more. Like a folk song unto itself, Llewyn keeps moving forward but loses so many pieces of himself along the way. The cycle is breaking him.

In an all too telling moment, Llewyn loses the Gorfeins’ cat. He does his best to find it and bring it home but ultimately gets the wrong one. He abandons the cat on a snowy highway en route the way to Chicago but ultimately ends of hitting it while nodding off on his return to New York. The cat lives but can be seen limping away as Llewyn dies a little more inside. He knows he will always be that cat, the one who isn’t what people want and will struggle through life.

Eventually his friends’ actual cat returns and he learns its name is Odysseus. The cat has gone on it’s journey and has returned a better cat. That is not a luxury that Llewyn can ever seem to attain. There is no home to come back to for Llewyn as all his roads seem closed. He

ends the film exactly where it began, being beaten in alley by the husband of a woman he heckled in a drunken stupor.

Davis is aware of the cruel irony of his situation and seems to be reluctantly accepting this is his life. A relentless rhythm of suffering orchestrated by himself and pure chance.  He can’t do anything else at all.    Llewyn accepts his Déjà vu that has hung over the entire film.  His fate seems to be barely scrapping by and bouncing between whatever friend’s he has left homes. Some sort of sad folk song  version of Sisyphus.

While it may sound like I am trying to knock down the film, I am not. I love how the Coens make these film so outside the regular rules of modern filmmaking.  Inside Llewyn Davis is a rich film to unpack and hits you right in the gut if you feel the world beating you down. It also has some truly funny bits to it and some dead on parody.  In particular, the spoof of the folk single  “Please, Mr. Kennedy” is such an ear worm, I have found myself singing ‘UH OH” for the past two weeks. Despite having one joke song, the rest of the music  (performed by all actors) is a true world building tool and it will resonate with you even after stopping the film.

I’m very happy that this film is on the list because it’s one of my favorites by the Coens’ rich filmography (so great we have 2 other films on the list).  Something about the film makes it feel so timeless and I think Llewyn nails what exactly this is: “If it was never new, and it never gets old, then it’s a folk song.”

Keep up on your journey, Mr. Davis.