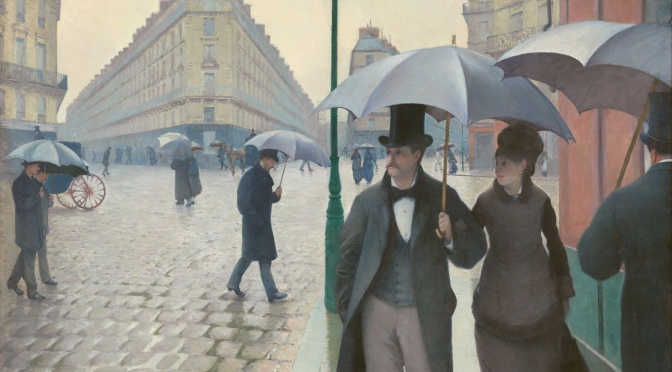 Playlist By Committee is a subdivision of the Institute of Idle Time dedicated to the preservation of the mixtape format. Each month, four governing members and one guest contributor choose a theme and each pick five songs that best correspond to that theme. The songs are then reviewed and ranked by the committee, with the the top songs being added until an 80 minute blank CD is filled. The list is then published via Mixcloud for the listening pleasure of all who seek it. This is our 5th playlist

Rain makes us feel something. Rain makes moments poignant, it facilitates loneliness, forces people to hole up away from each other to wait out the storm. Songs about rain come from all genres, from all eras of recorded music. In an effort to expand the PBC’s musical horizons this month’s guest is TB, producer, composer, and someone whose taste runs tangential to our main group. He chose the theme of “rain” because of its ability to cross genres and time. Next time you hear a storm brewing, see it through to the sounds of this mixtape.

Having a rain playlist without this song would be absolutely insane. If it weren’t for how much this group loves “Africa,” I bet this could have been Minogued. You can’t really talk about “songs” and “rain” without Gene Kelly, and it’s a shame that we can’t  see the athletics and choreography of this scene every time the song comes on. Don Lockwood is optimism incarnate, and hearing Kelly’s voice is enough to help anyone weather a storm. He makes you want to sing, and dance, and get wet! – RF

Laying a gentle guitar track and organ-style synths over the sounds of natural rain adds to the tranquility of this fine tune from Bibs. Slide on your headphones like a raincoat and enjoy the beauty of falling rain from an insulated vantage point. – RF

Bob Dylan’s music is not available in a format that can be embedded here, the song can be found about 10 minutes into the mixcloud playlist further up on the page, in lieu of a video for the song “Buckets of Rain” a different video of Bob Dylan has been provided.

While I love the rain, there have been times I feel a cliche sadness when staring at it. His Bob-ness provides the ultimate lyric to accompany the stare, “Life is sad / Life is bust / All ya can do is do what you must.” One of the definitive Dylan closing tracks, the simplicity of just a guitar and bass really nails down that feeling of watching water hit ground. – BC

4. The Only Shrine I’ve Seen – Darkside

5. When The Levee Breaks – Led Zeppelin

This song is an American classic, but Led Zep recorded the definitive version capturing the essence of mounting tension with a heavy, bluesy downpour. Page’s guitar and the reversed harmonica on the bridge make it sound like the song just might overflow. Though it was originally written about the Mississippi Delta, a bunch of us Idlers grew up near the Sacramento River (and its nearby Delta), and attended a school at the foot of one of the most unsafe levees in America. During heavy rain, my dad would sing this song and crank it up everytime it came on.  To this day, whenever there’s a storm and it’s pouring buckets, this the first thing that pops into my head. Well, that, and how Katrina really cornered the market on levee-breaking conversations. – RF

I’ve ran out of many a social gathering into the rain in a drunken haze just because I wanted to escape. Doesn’t matter how unprepared you are but you gotta run; however, there comes that moment you say “fuck it” and try to work out what happened. You give someone a drunken call and try to figure it out. Bowie made this during his Berlin trilogy, the ultimate drug and booze filled escape, but it perfectly captures that moment of clarity in the rain. – BC

Tension builds, a few drops turn into a flash flood. Rain can be beautiful, but it can also be deadly. Radiohead imbues both qualities into a song that finds the band channeling their most aggressive version of themselves. – IP

Crystal Castles tend to fill their songs with static, the chaos this technique creates hides their often beautiful melodies and tortured vocals. “Baptism” is dunking your head in ice cold water, taking it out, then dunking it again, over and over, until conversion occurs. – IP

Shlohmo debuted with this rainy, but somehow warm song. Clicks and clacks help the feeling of a wet city subside. – IP

The Softies are about as twee as possible, but this syrupy sweet song feels just right for looking out on a rain soaked window and asking Siri “Is it raining?” Yes Zooey, it always is. – IP

Rumours is, as comedian John Mulaney puts it, “an album written by and for people cheating on each other.” So what better way to deal with the mental anguish than letting the rain wash you clean. Sadly the cocaine that fueled Fleetwood Mac is not provided, just Stevie’s sweet cooling voice. – BC

Van Morrison says this song is tied to a vivid memory of himself and a friend meeting and befriending an old fellow in a small town who gave them stream water they would never forget. Even though that’s a creepy story the song it spawned recollects the fondest atmosphere of a rainy Irish childhood. – IP

An embodiment of the rain in lyric and feel. – TB

Toto’s 1984 cheeseball classic became a bonafide phenomenon among the PBC and friends around 2012. For a solid year, every drunken night contained at least one singalong of this shockingly enduring hit. – IP

Ladysmith Black Mambazo is tied to some happy childhood road trips thanks to a cassette of Paul Simon’s Graceland. Accomplished artists in their own right, this South African choir has something inherently soothing in their bare style. Rain, Rain, Beautiful Rain is a simple, melodic poem, with choral harmonies, that has the comfort of a lullaby or prayer. – RF

Sometimes I forget how much of a tour de force RiRi was back in in 08. Umbrella isn’t my favorite track of hers, (I got you Disturbia), but it still bangs. – MH