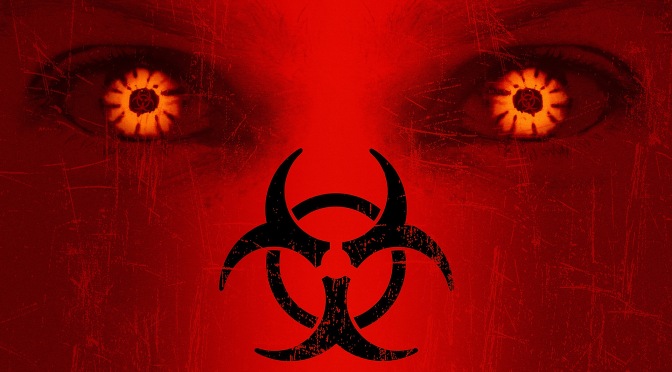 As part of our Ultimate Playbill project, each week a faculty member will take the time to extol the virtues of one of the beloved films on this list. As the Halloween season approaches it seems prudent to write about the horror films selected for our project, beginning with hltchk’s 3rd pick, 28 Days Later…

28 Days Later does zombies right. They run, they scream, they vomit blood on the faces of the uninfected. Danny Boyle’s manic film brought zombie movies back from the dead. Boyle had just completed The Beach when he was presented with a story about “running zombies,” which must have seemed like a risky career move for the director, whose debut film, Trainspotting, was already considered a classic, and whose followups until then had been considered disappointments. Thankfully for fans of horror, zombies, and cinema in general, he decided to make this film.

The success of 28 Days Later boils down to two essential choices made early in its production. The first of these is the film’s impressive starring cast, rounded out by memorable smaller roles, thanks to casting director Gail Stevens. Cillian Murphy was relatively unknown at the time, and he would continue to be underused in American films until a few years later, when Christopher Nolan would perfectly cast him as the psychotic Scarecrow in Batman Begins. Murphy has a world-weary look on his face nearly the entire film, selling his character’s origin as a man who woke up from a coma to find London dead. The real challenge for Murphy though, would be selling the man Jim is forced to become when Major Henry West reveals his sinister intentions for the women Jim has been travelling with.

Speaking of Major West, Christopher Eccleston is excellently cast as the head of a small band of soldiers who have overtaken an estate, now barricaded and heavily defensible against the nightly waves of zombie attackers. From the moment our heroes arrive, it seems as though something about the estate is off, largely due to the foreboding hospitality of Major West, and his sadistic imprisonment of a soldier-turned-zombie in the garden. When the film reveals the true terror of mankind, Eccleston sells Major West’s almost defeated adherence to a promise that led many of the soldiers to his estate in the first place, a promise of women.

Noamie Harris also does excellent work as Selena, a no-nonsense survivor who acts as a conveyance of useful narrative information, and a dismissal of the classic Mary Sue trope. Selena is very competent, but also on the brink of death in every encounter. She is a fighter, but when set upon by a dozen soldiers she reacts with overwhelming fear. Still, she fights to protect Hannah from the worst of it by drugging her to the point of catatonia.

The final cast member who elevates the film to the height of the zombie genre is Brendan Gleeson, an actor who has never not made a film better just by being in it. His portrayal of Frank feels recognizable, and the fit he experiences during the excellent scene in which he succumbs to the Rage Virus is disturbing to say the least. The few scenes in the film that show the characters having fun, like when they drive their tiny car over a wall of smashed vehicles, are heightened by his charming demeanor. Though its a shame he exits the film just before its third act, he does such good work that the shadow of Frank is felt throughout Hannah’s ordeal at the estate.

The second choice Danny Boyle made that elevates 28 Days Later beyond the threshold of zombie cinema is the decision to shoot the entire film digitally, much of it with handheld cameras. This decision could have been disastrous, since digital filmmaking, especially at the time, was both considered lesser, and considered ugly by the wider critical audience. Ugly is exactly what the film needed though. The Rage Virus brings the worst out of humanity, strips it of any beliefs, any notions of self, it blurs and distorts the human face so as to make it monstrous. Grainy, ugly looking shots help sell this new world, this new humanity.

Though ugliness is often unpleasant to look at, it can be an essential tool in filmmaking, particularly to portray a changed world. The first scene of Jim exploring an empty London is aided by an almost voyeuristic feel, accomplished using handheld cameras shooting him from a distance, often above, showing the viewers that there is something sinister lurking in London still. Later on, when the survivors reach the estate, the lack of clear lighting aids in the slow burning horror of the soldiers’ intentions with Selena and Hannah. Finally, during the ending, the intense green of the hills in which the survivors have now settled is enhanced to contrast with the dark green of the estate lawn.

The film’s ending might be its greatest addition to zombie cinema though. Boyle shot several endings, the unused options all resulting in Jim’s death. But by repeating the look of the shot in which Jim is introduced, Boyle is able to bring the film back to where it began visually, further juxtaposing the two Englands the viewer has seen, and further emphasizing the difference between the “dark world” and the “light.”

28 Days Later is an excellent film, easily the best zombie film since Night of the Living Dead, as well as one of Danny Boyle’s finest genre experiments. Though the director would eventually win an Oscar for Slumdog Millionaire, I like to think of it as recognition for a career that strikes out in many different directions, and more often than not succeeds.