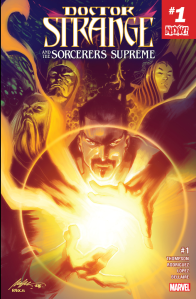 No surprise, with Marvel’s latest Hollywood blockbuster scheduled for wide release on November 4, that we’re getting a double dose of the good doctor this year. Not since the Defenders days of the 70’s and 80’s has Doctor Strange featured simultaneously in multiple ongoing titles. Doctor Strange and The Sorcerers Supreme #1, by Robbie Thompson and Javier Rodriguez, hits shelves for week 4 of Marvel’s latest NOW! initiative, which gives us one more reason to thank Marvel Studios for making the Master of the Mystic Arts pop-culturally relevant. Unlike Aaron & Bachalo’s outstanding Doctor Strange series, however, or even any of the iterations of The Defenders over the years, this book looks to pull the focus away from Stephen Strange while emphasizing a fun new magical ensemble.

The story picks up after the events of The Last Days of Magic with Strange still trying to recover what magical energy he can in our universe. Merlin, of Arthurian lore, and no stranger to the Marvel universe, assembles a super-team of super-sorcerers to combat an entity known as The Forgotten, which was purportedly unleashed on the past during Strange’s battle with the Empirikul. It’s like a Web Warriors for the mystical set, except with more flowy capes and fewer anthropomorphic pigs. Suiting up for action is a Wiccan from a future in which he is Earth’s Sorcerer Supreme; a Sir Isaac Newton from a reality in which he commands a “Mindful One” (a creature that looks a lot like Dread Dormammu’s Mindless Ones); a brash, younger version of The Ancient One; and two new characters: Kushala, the Demon Rider, and a mysterious pistol-wielding, swashbuckling woman known only as “The Conjuror.”

Despite some solid building blocks in Strange’s main title and Scarlet Witch, three other failed attempts at cultivating an enchanted corner of the Marvel universe (Weirdworld was pretty good; Howling Commandos was not; Black Knight was just awful), have only hurt property values. But Thompson’s premise and team are encouraging. Moreover, what elevates Sorcerers above classic magician vs. monster fare is the art of Javier Rodriguez. Fresh off his great run on the ANAD Spider-Woman, Rodriquez gets to trade in the sci-fi for fantasy, adding beasties next to aliens in his creature portfolio. The design of the Forgotten’s cultists is particularly devilish. And the double-splash of Merlin guiding Strange on a temporal journey to the principal battlefield is a gorgeous piece of Jim Starlin-meets-Brendan McCarthy artistry that is worth the entire price of admission.

DC Rebirth: Week 23
This week marks the end of new Rebirth titles for the time being, as both Super Sons and the next attempt at Justice League of America have been delayed until 2017. So with the release of Batman Beyond #1 and Teen Titans #1, the commercially successful DC: Rebirth culminates with 29 new series (or, in the case Action and Detective, which have maintained their decades-old numbering, new beginnings). But who cares about commercial success! These properties sell themselves. What you really want to know is what our Idle Time focus group thought of these books, right? Stay tuned, four color fans. Praise and shame forthcoming.

Filled with great ideas and concepts from the animated show that spawns it, the Batman Beyond comic is fun, but not really substantial. McGinnis’s inner monologue doesn’t make him feel very interesting, and the forced use of the made-up slang (If I see someone say “schway” one more time in this issue…) is the nudging elbow that insists on reminding us that this is the future. Bernard Chang’s work isn’t terrible, and I don’t like it as much as Ryan Sook’s stuff, but it does justice to the original character designs while offering some really cool new stuff to look at, particularly with all the different Joker thugs. This issue doesn’t really move the story along enough for me, and Batman becoming a Joker is a conceit that I bet won’t have any real novel outcome. I wouldn’t hate reading this series, but I’m not champing at the bit for more. I’d love to see it as a cartoon though. – tyrannoflores