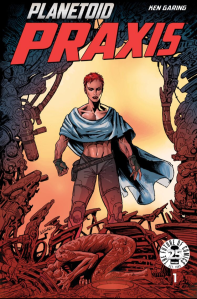 Twenty-five years ago, a group of talented comic book rebels took a bold stand for creators’ rights, turning their back on the major publishers to start their own independent publishing company. They had big ideas and bold plans, but I doubt they realized just how influential and successful Image Comics would be.

Today is Image Comics Day, and we celebrate some of the best creator-owned comic books being published today. Two of our favorite titles have new issues out this week, and a number of others have had new storylines debut recently. Today you can also pick up the new The Walking Dead for only a quarter, an issue that promises a good jumping-on point for new (or lapsed) readers. And, as always, Image offers first volumes of many of their collected trade paperbacks for only ten bucks!

For decades, Image comics has created opportunities for veteran artists and writers to flex their creative muscles, but they’ve also provided an outlet for aspiring new cartoonists to grow in the industry, taking chances on projects like Ken Garing’s Planetoid, the story of a space smuggler who crash-lands on a planet overrun by menacing robots. In the original 2012 series, Silas, with the help of a stolen energy weapon, rallies the human nomads struggling to survive on the planetoid, and stages an uprising against the malevolent A.I. and its alien progenitors. 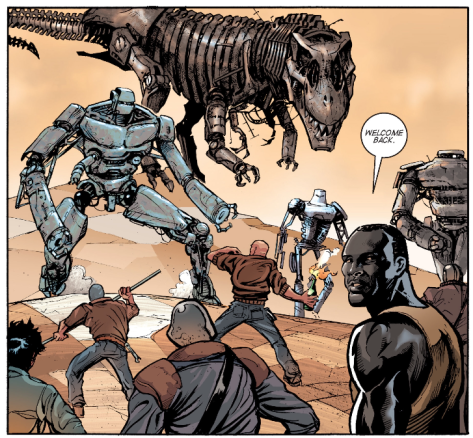 This week, Image debuts Garing’s long-awaited follow-up with Planetoid Praxis #1. This time the fate of the settlement is in the hands of Onica, and she faces a difficult decision when the planetoid is visited by a solitary Ono Mao traveler. While Garing’s artwork continues to improve, and the scrapheap civilization seemingly comes to life both under the direction of the characters as well the development of his skills, the storyline takes on a much more prescient theme. What happens when fear and distrust are the foremost emotions fueling the populace? Where is the voice of reason and, more importantly, how do these reactions serve to inform the younger generation?

East of West
East of West hooked me from the first pages. Several colossal spires tower ominously over a stone altar, accompanied by the words “the dream is over.” The four horsemen of the apocalypse rise from a primordial ooze, War, Famine, Conquest, but where is Death? Jonathan Hickman and Nick Dragotta have crafted one of the most unique and interesting reimaginings of America in comic book history in this series. If you love westerns, science fiction, or the bizarre horror of the Book of Revelations, look no further. – IP

Kill Or Be Killed
Once again, the best partnership (Ed Brubaker and Sean Phillips) in comics delivers another wonderful series. Exploring the world of vigilantism is a tired trope at this point, but Brubaker manages to put a fresh spin on it. The protagonist, Dylan, is a depressed college student who attempts suicide only to be saved by a demon. In exchange, he must kill a person every month or be damned to hell. Dylan decides he will only kill those who deserve it, and thus the morality of it all comes into play. No one does character acting better than Phillips, so it comes as no surprise that the art is top-notch. In addition to the great story, essays included with each printed issue make them worth buying individually. Can’t recommend enough. – MeanOldPig

Paper Girls
Brian K. Vaughan has done it again. This may not have the intrigue of struggling to raise a child born to two members of perpetually warring extraterrestrial races, but this story of time travel and teenage angst is bound to hook you. Who thinks to write an entire series about papergirls? My brother was a paperboy growing up and I always thought it looked awful. Getting up before the sun to throw papers out a van window…no thanks. BUT these badass papergirls have an entirely different agenda. The art is fantastic and the color work by Matt Wilson is intoxicating. In fact, issue #11 came out just today. See you at the comic shop. – LDG

Descender
If you’re like me, you were little disappointed with Spielberg’s A.I film. Maybe it was too far removed from Kubrick’s original vision or maybe it was just Haley Joel Osment (I’m going with Haley Joel). At any rate, if your itch for a story about a robot boy needs to be scratched, never fear – Jeff Lemire and Dustin Nguyen’s comic Descender is here to hit that spot! Lavishly illustrated by Nguyen, his watercolors hearken back to Kent Williams (see Wolverine/Havoc: Meltdown and “Blood: A Tale), but the book’s strength lies in Lemire’s talent of infusing his characters with a humanity, no matter how alien they may be. – ghostmann