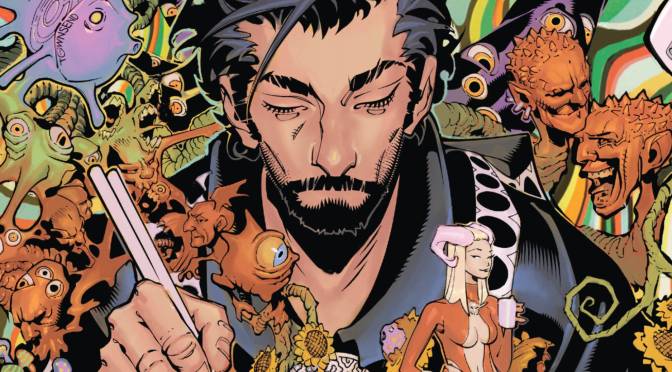 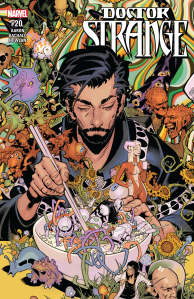 Blame it on the Time Gem, that re-imagining of Doctor Strange’s Eye of Agamotto for the MCU, warping temporal conventions and mortal publishing schedules. This week’s Doctor Strange #20, the culmination of Jason Aaron and Chris Bachalo’s brilliant run on the book, comes a week after issue #21. Weird, yeah? One might say strange, even. Or maybe Marvel was just really eager to get the first issue from the new creative team on the stands for its Secret Empire tie-in. The real reason for the twisted release schedule, however, can be found in the afterword of this week’s book: “Why, you ask, is issue #21 already on sale? DO NOT BLAME KADAVUS! Blame the incompetent editor whose buffoonery has put him on the edge of infinite torment!” Well, sure. It’s well-established that comic book editors are all buffoons, so I’m sure a slight delay on an oversized book brimming with mind-bending Bachalo splash pages and interior art from the legendary Kevin Nowlan can fall squarely on that moron’s shoulders.

And we’ll excuse it. Because, truly, none of us really wanted to see this creative team bid farewell. We typically spotlight series or storyline premieres in these weekly New Comics posts, but this time we’re making an exception. Since Aaron and Bachalo first introduced us to this new axe-swinging Stephen Strange in the opening week of the All-New All-Different initiative, Doctor Strange has been one of the most exciting and visually gratifying superhero books on the shelf. This new issue even brings back that “sexy incorporeal asian succubus” that had a little something to do with the book’s high finish in our ANAD rankings.

But more to the point, Doctor Strange #20 puts a bow on the three epic stories from this team’s run. In “The Last Days of Magic,” Aaron and Bachalo established the “rules” for wielding magic in the Marvel Universe and, in the process, gave us proper introductions to both the Sanctum Sanctorum and a brand new supporting cast member, librarian-turned-apprentice Zelda Stanton. In “Blood in the Aether,” we were treated to a tour through Strange’s classic rogue’s gallery, every one of them looking to take advantage of our plane’s now-weakened magical defenses. We got Nightmare and Mordo, Satana and Master Pandemonium; a fantastic taxi-driving Orb, and even the big-bad himself, the Dread Dormammu. And in the most recent storyline, Aaron explored Strange’s relationship with Wong, and further developed the latest arch-nemesis, Mister Misery.

It’s been my favorite Strange run since the original Lee & Ditko days, and, truly, Aaron & Bachalo have established a “Doc Weirdo” for a new generation. His character, initially, seemed to bounce between the wise-ass nature of Peter Parker and the arrogant bravado of Tony Stark before finding his voice. Zelda looks like she’s here to stay. The “rules” make sense in a way that isn’t supposed to work when it comes to sorcery, wizards, and weirdness.

Speaking of weird, Jane Foster-Thor and The Orb aren’t the only members of Aaron’s entourage to make guest appearances during this Strange journey. Issue #20 sees the great Kevin Nowlan, who had been responsible for many of this series’ fantastic covers, illustrate a detour into the “land of lost things,” Marvel’s Weirdworld.

While we’re pretty excited for the new “Hopeless” era of Strange (as soon as he deals with the Darkforce dimensional prison around Manhattan), the hangover from Aaron & Bachalo’s party figures to linger on for quite a while.