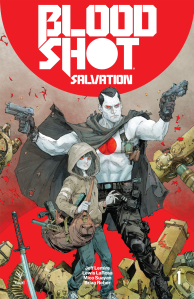 I don’t work for these folks, and I have no illusions about my marketing prowess, but someone over at corporate should have known to kick off 2017 by declaring it the Year of Valiant. Or something to that effect. Matt Kindt’s X-O Manowar is one of the most gorgeous and engrossing space fantasies in years; Heisserer and Allen have mastered the misfit hero shtick in Secret Weapons; Faith and The Future Force is that rare breed of superhero event books that is actually fun; and now, Jeff Lemire offers up yet another exhilarating jumping-on point for readers interested in learning what Bloodshot’s all about. Along with art by Lewis LaRosa and Mico Suayan, Bloodshot: Salvation #1 picks up after the conclusion of Lemire’s Bloodshot: Reborn and Bloodshot U.S.A. stories. This first issue contains the right amount of backstory to get the uninitiated up to speed, and then it’s right back into the best action movie in comics.

Ray Garrison is Bloodshot, a nanite-powered super soldier commissioned by Project Rising Spirit to do its covert (and sometimes not so covert) dirty work. Both in origin and abilities, he’s basically a cross between Wolverine and The Punisher, but Lemire hasn’t allowed uninspiring similarities to prevent him from developing a distinct character, or to tell stories that live in their own world of government conspiracies, super-powered death machines, and high-tech wizardry. As is often the case with Lemire books, this issue plays with linear narrative chronology, hopping between the near future and the recent past.

In the “soon,” Ray’s daughter and girlfriend, Magic, are on the run from yet another government agency, this one operating under the ominous title of Project Omen. His daughter, for reasons as yet unexplained, has the Bloodshot nanites running through her system, and Ray, according to mom, “isn’t coming back.”

But in the before, we see Ray, Magic, and their young child trying to live a semi-normal life, off the grid and away from the insanity. When Ray speaks to someone from Magic’s past, however, his blood starts rising, as it were, and pieces of that scary future start falling in to place.

Jeff Lemire’s prolific output over the course of his career has ranged from intelligent, moving drama, like this year’s Royal City, to pure popcorn entertainment. Bloodshot certainly falls among the latter, but it’s his penchant for engaging dialogue and clever plotlines that keep us coming back to the box office for more. Not for nothing, either, but if Sony Pictures feels like diverging from their plans to base the Bloodshot movies on Valiant’s Harbinger Wars, Lemire & co. have a shit-ton of storyboards ready to go.