Last week’s opening shot into Marvel’s Legacy initiative was a surprise-laden tour de force featuring a main story peppered with enough coming attractions trailers to put a Hall H Saturday to shame. And while we’re eagerly awaiting developments in Thor’s story (well, not eager to see Jane Foster edge ever closer to death, but the Mangog business is exciting) and wondering what the hell is going on with this Black Panther planet, Legacy Week 1 begins with a gem from another segment of the Marvel Universe. Avengers #672, by Mark Waid and Jesus Saiz, kicks off “Worlds Collide,” the highly anticipated crossover between two of the best team books going. With the fates of multiple earths on the line, the Champions attempt to make nice with their former mentors, The Avengers.

The issue opens with simultaneous debates in both camps regarding the same impossible claim: a “counter-earth,” run by the High Evolutionary, exists on the opposite side of the sun, completely invisible to detection by anyone here on normal earth. Of course, those of us familiar with decades of Marvel legacy, know this to be true, and we’ve enjoyed numerous storylines involving the home of that unhinged scientist and his hordes of crazy animalmen. And in wonderfully adept adherence to the premise of this publishing initiative, Mark Waid uses the new generation of Marvel heroes as a sounding board for a modern understanding of physics and comic book plots anchored in a proper respect for scientific fact. 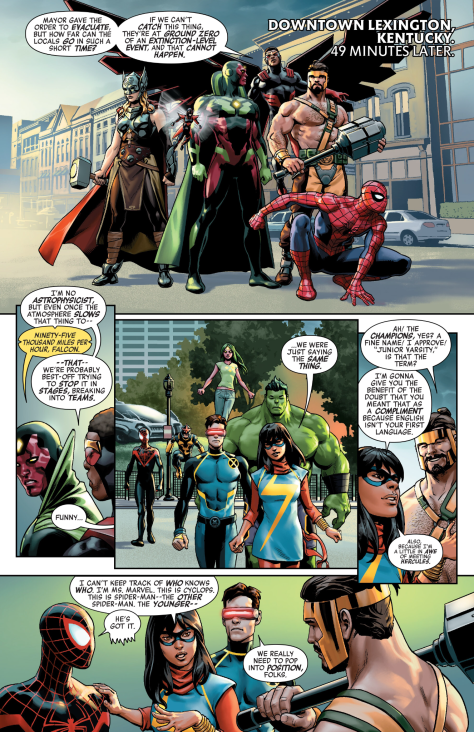 But then you’d be missing the point, Amadeus and Nadia! You operate in a universe of impossibility, and the last thing any one of us Marvel fans wants is to retcon away the marvelously campy and cosmically inaccurate tales from those halcyon days of 70’s four color fantasy! Give us counter-earth! And save Kentucky, while you’re at it, because a meteor just belched into the atmosphere and is rocketing towards the planet.

Mark Waid is at the top of his game, and, if possible, these books keep getting better and better. He’s feeling more comfortable than ever with these very different team dynamics, and, as good as this Champions lineup is, this new Avengers roster is up there with my favorite of all time. And jesus, Jesus! I thought I was going to miss Mike Del Mundo on this book (and, I do… if you’re listening, Mike, you’re still the best), but Saiz’s art is unbelievable.

As with many titles in this Legacy launch, the series numbering restores decades of continuity across various volumes of Avengers, as well as the first volume of Bendis’s New Avengers series (subsequent volumes of New Avengers didn’t factor in, as those coexisted with proper Avengers titles). The physical edition of this week’s issue has a nice mathematical graphic that breaks it down far better than I did in last week’s post.