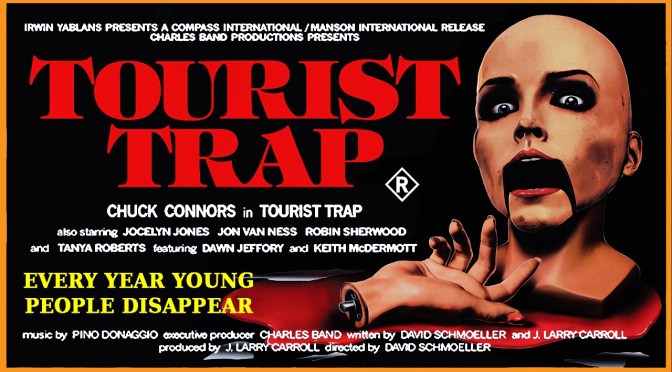 I’ve decided to subject myself to 31 days of horror films for the month of October. It will be a mix of rewatching stuff I haven’t seen in awhile and brand new things. Day 9:

Not everything makes sense but that's okay. Weird fun little nugget. Me and G are going to be using the killer's voice from now on.

When I moved away from LA, TOURIST TRAP  was one of the last movies I had to miss seeing a the New Beverly. Both comedian Patton Oswalt and Stephen King were hyping the film so I was super bummed missing it. Halloween seemed like the perfect time to finally watch and oh boy: this movie is really really weird.

I don’t know if I can honestly do justice to the strangeness level of the film. While it does suffer from really low special effects, the mannequins are actually creepy as hell and the low budget nature of the film does add to its’ mystique. The main draw here is the villain who is genuinely creepy and fucking insane. His mask is freaky and his voice, oh his voice, make him a true delight. At one point he demands to know if a mannequin is enjoying their crackers because HE HAS TO KNOW IF HIS CRACKERS ARE GOOD. I enjoyed watching him spout further madness, play with dolls, and have telekinetic powers for no reason at all.

For all its’ faults TOURIST TRAP is a unique film. The deaths aren’t that great beside two of them but the overall atmosphere of the piece makes it something worth watching in my opinion.