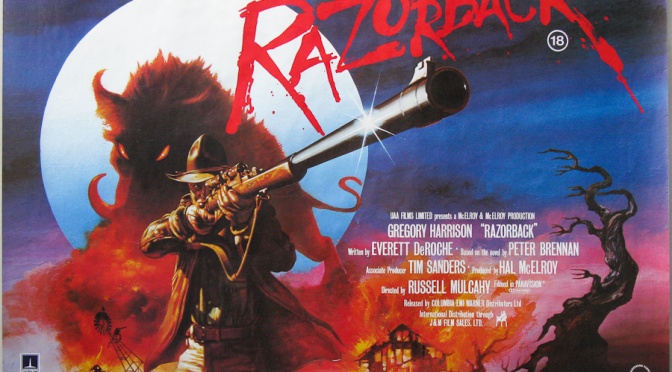 I’ve decided to subject myself to 31 days of horror films for the month of October. It will be a mix of rewatching stuff I haven’t seen in a while and brand new things. Day 16:

DAY 16 – RAZORBACK. In Australia, a hunter gets framed for the murder of his grandson by A GIANT FUCKING BOAR.

Acting isn't that great but if creature features are your bag, this isn't one of the bad ones.

I’ve been kinda lukewarm on creature features because they tend to be not really imaginative or just have really weak characters. The joy in one of these films is making your creature intimidating and your character so big that you at least feel some sort of attachment to them.

RAZORBACK really manages to hit the mark when it comes to imagination because it has some crazy stuff that I didn’t think possible in a film like this. Like I mentioned on Twitter, the film literally opens with this Australian town’s premier Razorback hunter (Bill Kerr) putting his baby grandson to bed only to have a a GIANT RAZORBACK burst through his home to kidnap/consume the baby. The town never sees the giant Razorback again and believe the hunter killed his grandson and hid the body so he goes to jail because an animal framed him. Not going to lie, I love this premise so hard.

12 years later a female reporter (Judy Morris) investigating reports of people killing kangaroos to make pet food in the same town. While this seems unrelated at first, she discovers the two brothers (Chris Haywood & David Argue)  committing the kangaroo murders and captures them on film. During her escape, the brothers run her off the road and attempt to scare but are thwarted when the giant Razorback runs them off and eats the women.

Now her husband (Gregory Harrison)  comes to outback looking for revenge and crosses paths with the hunter. Now the two must deal with a freak of nature animal and two insane brothers. I don’t normally don’t write about the set-up of films but this one required it because how crazy it is.

The revenge mission leads to gruesome deaths by people and boar, a freaky hallucination scene, skinned animal corpses, and some pretty sweet boar set pieces. In total, the movie’s creativity is pretty admirable and features some memorable sequences that I was not expecting. The only problem for me is that the acting doesn’t reach the necessary highs and holds back the film from being truly great. The two brothers are the best actors because they get to play the most awful people you want to see die.

I know creature features aren’t everyone’s favorite but if you do enjoy them, you probably should check this one out. The acting will make you second guess it but the creativity from the look and atmosphere of the film is more than enough to make up for the lackluster parts.