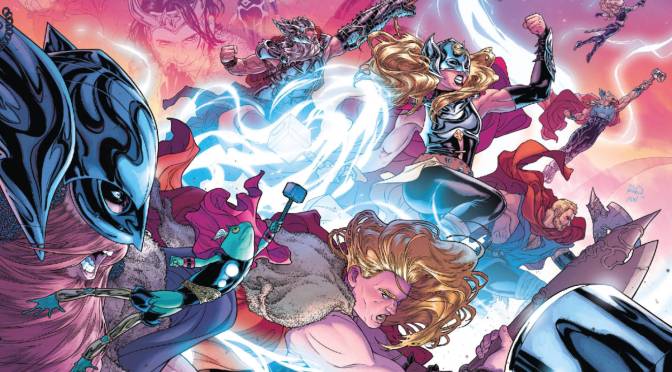 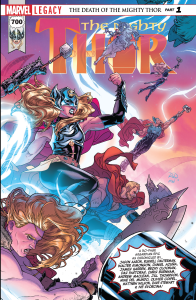 Every once in a while a book comes out that reminds us not only how much we love the glorious spark and bombast of superhero comics, but also how much we’ve loved them over the years, and how much these characters, creators, and concepts have meant to us through various stages of our lives. One of the principal aims of Marvel’s Legacy initiative is to pay tribute to Marvel’s storied past while paving the way for an exciting future. No one has taken that more to heart, or done a better job embodying those ideals, than Jason Aaron. In Week 3 of Marvel Legacy, Aaron and a host of incredible artists drop the “god-sized” Thor #700 on the shelves, and, verily, the earth doth shake with its majesty.

The War of the Ten Realms is still raging, and now things really escalate as Malekith and his armies move against the stronghold of the Norns at the base of the World Tree, Yggdrasil. The sisters who weave strands of fate are besieged, and in the process, the very fabric of storytelling itself comes under attack. It’s the perfect milieu for this launch, and the gorgeous two-page interior spread by Thor artist extraordinaire Russell Dauterman portends enough future storylines, each of them with threads connecting back to that legacy tapestry, to make your head spin. There’s Loki with the Infinity Gauntlet and Odinson with what looks like a golden hammer. Both Namor and Brunnhilde look primed for battle. Jane Foster might really (snif…) succumb to cancer and, in the background, the Mangog looms!

You want more Legacy? You’ve got more Legacy. What’s more Marvel than a classic Hulk vs. Thor battle? Except in the modern era, that means Thor, Goddess of Thunder, taking on Jennifer Walters, the hero formerly known as She-Hulk.

This frenetic melee, part of the main plot of the issue, is illustrated by Daniel Acuña, who also graces us with his rendition of Throg, the Frog of Thunder. Head Lopper‘s Andrew MacLean gives us his take on Loki and his frost giant roots. The legendary Walt Simonson even kicks things off with a tribute splash to one of the truly great eras of Thor stories. There’s an incredible flashback tale of a young Odinson, and a far-flung future in which the God Butcher’s Necrosword affects the balance of power among cosmic titans. Oh, and the “War of the Thors” that concluded in the prior issue doesn’t mean we’ve seen the last of Ultimate Mjolnir or War Thor.

All of this is stitched together with Aaron’s pitch perfect script, melding humor, pathos, action, and suspense, like no one else writing capes n’ tights books today. And in case you, like me, are still hoping that this arc’s title, “The Death of The Mighty Thor,” is clever misdirection, check out the variant lenticular cover by Stephanie Hans. It’s a stirring tribute to that one time a major publisher killed off a major hero and he stayed dead. Then, like me, you’re thinking the cover is also clever misdirection, and Jane Foster is going to be just fine. What — we can have a dozen fucking Wolverines running around all at once, and the best Mjolnir-swinger ever (yeah, I said it) has to clear off the stage?