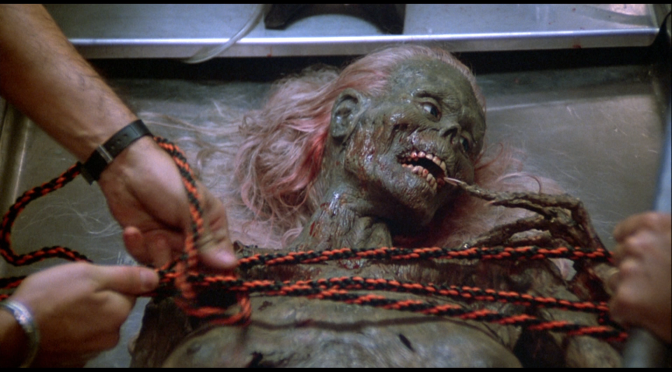 I’ve decided to subject myself to 31 days of horror films for the month of October. It will be a mix of rewatching stuff I haven’t seen in a while and brand new things. Day 23:

The zombies just feel so overpowered in it that it feels hopeless the whole time.

When watching NIGHT OF THE DEMONS on the previous night, we got a trailer of THE RETURN OF THE LIVING DEAD. G remarked she had never seen the film and it looked fun so we decided to watch it for our next film. I had fond memories of watching the film in high school and saw it on a punk double feature with REPO MAN years ago. I still had a lot of fun with this movie but sadly it didn’t live up to my memory this time around.

For those of you that don’t know. When George A. Romero and John Russo wrote TNE NIGHT OF THE LIVING DEAD, they had a dispute on how to handle the sequels. They decided to divvy it up as Romero getting the title of DEAD movies and Russo would get LIVING DEAD. As we learned from Romero’s movies he was much more interested in having sequels be about humans coping with the zombies while Russo wanted to say fuck it, let’s make balls to walls insane zombie movies.

This movie supposes the events of NIGHT OF THE LIVING DEAD are real and a zombie body is stored in a military designed barrel at a medical research facility. Two dimwitted employees accidentally unleash zombie zero and the madness begins. In this film, the undead virus spreads both through bite and airborne if they zombie burns. This film popularized the idea that zombies say, “brainsssssssss.”  What’s weird is that they say a lot more. In fact, they can speak full sentences and have pretty good conversations.

That’s my problem with the film though. Being a zombie doesn’t really seem to have any weakness. Cutting off their heads or stabbing them through the heads does absolutely nothing! The whole time the situation seems hopeless for the people so it’s hard to get attached to anyone since all of them are royally screwed.

What the movie does have in it’s favor is how wacky and over the top it presents itself. The main cast of the film is a group of punk kids caught in a graveyard as the virus goes airborne and brings the bodies in the graveyard to life. They rip out of the grounds to “Partytime” by 45 Grave and it’s really great. The frenetic energy of the film really makes it hard not to have fun.  So despite all the hopelessness, the film still manages to be very fun and entertaining.

I’d recommend it with a group of people so you can all enjoy the madness of the film. It’s hard not get pumped with the film’s soundtrack as well.  If zombies aren’t your thing, you can avoid entirely but if you do like a good horror comedy, this one works well despite its flaws.