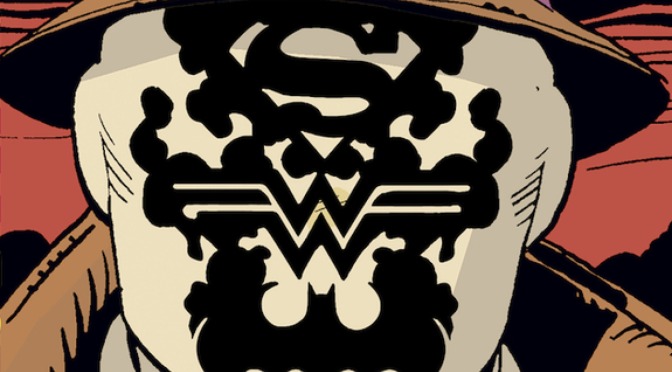 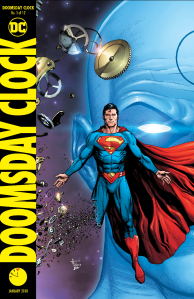 I was fourteen when Alan Moore and Dave Gibbons’s Watchmen first hit the stands. I was already a huge Moore fan from reading his Swamp Thing run. I picked up Watchmen on his name alone.

At fourteen I really wasn’t aware of the magnitude of what I was reading, but I knew it was good and that it meant something. With each subsequent reading I grew to love it and understand it more and more until my appreciation of the series grew to giant squid proportions!

Now, over thirty years later Geoff Johns and Gary Frank have brought us a sequel – a continuation of Moore and Gibbons story. Big shoes to fill.

For the next twelve months I’ll be analyzing each page and breaking things down.

It’s time to read along with ghostmann! Doomsday Clock #1! 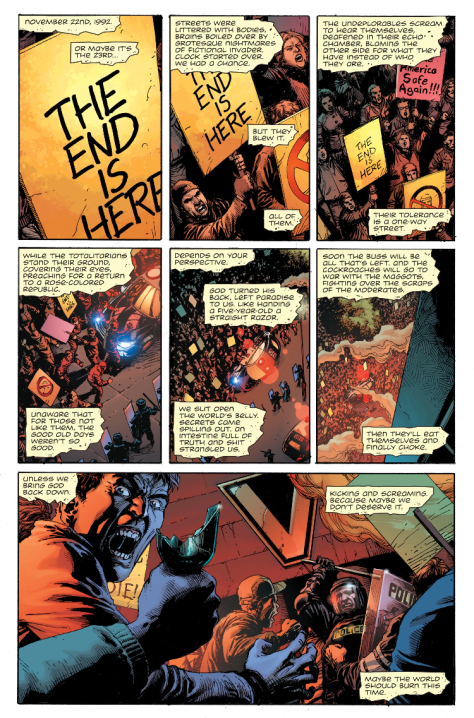 Ahh the 9 panel grid. A sight for sore eyes.

Panel 1, of course in true Watchmen tradition, echoes the cover of the comic.

Rorschach is setting the tone, much like he did in the original Watchmen #1. It’s 1992, seven years after Rorschach died. Wait, he DIED! How can he be narrating?

The “The End is Near” sign that Rorschach / Walter Kovacs carried around in the original series gets altered a bit here. It’s now “The End is HERE.”

The angry crowd turns into a mob and rushes the Veidt tower.

The scene is set perfectly by page 1: The world of The Watchmen has turned ugly since last we visited it. 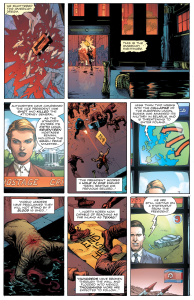 Hostage crisis at the White House! The Vice President shot and killed the Attorney General! Things have gone south in D.C.

Speaking of D.C., looks like the President is golfing and the Mexican Border wall he built had been broken through. Hmm, sounds familiar.

Page 2 amps the tension up and showcases brilliantly that the world is leaderless and heading towards Armageddon. 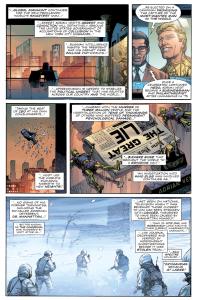 Well, looks like Veidt’s masterplan with the giant squid backfired. Thanks to Rorschach’s diary no doubt.

Oh look, the angry mob throws Veidt’s office chair through the window echoing that time Veidt threw the Comedian through a window. 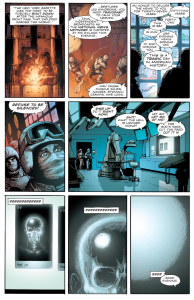 The commandos blow their way into the stronghold. Someone left all the TVs on!

Every news network is preparing to go off the air for good, saying their goodbyes, making way for The National News Network.

One of the goodbyes is from some dude named Howard from the UBS Evening News. Howard isn’t ready to sign off, in fact he’s mad as hell and he’s not going to take it anymore!

The commandos walk into a radiological room, where an MRI or CT machine has taken a scan of someone’s brain. Looks like a brain tumor. Could it be Veidt’s brain? Isn’t that ironic, don’t you think? 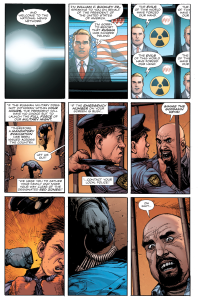 The National News Network, NNN, is anchored by William F. Buckley Jr., who in our real world died in 2008. Good to seen he’s still kicking in the Watchmen universe.

The prison guards are clearing out, leaving the prisoners to fry. 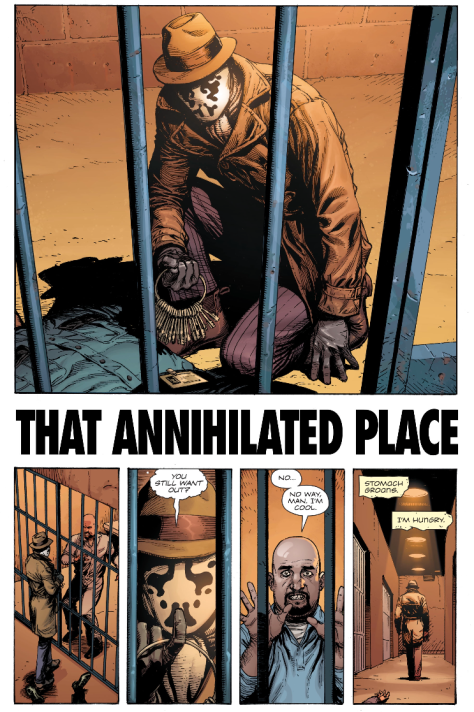 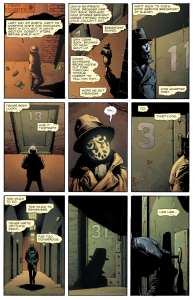 This “new” Rorschach seems to have a memory problem. Can’t quite remember some details.

Except when it comes to diner waitresses, then he has the memory of an elephant.

This Rorschach doesn’t write anything down so perhaps that explains the memory issue. Claims writing things down is too dangerous. This can’t be the old Rorschach; Walter Kovacs would never say something like that. 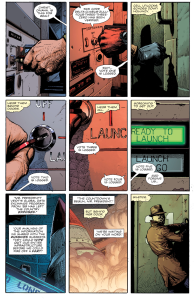 Nuclear missiles are locked and loaded! Just waiting on the president’s order to launch.

Here on this page, Johns utilizes Alan Moore’s writing technique of word panels talking about something else but echoing what is drawn on the page: the unlocking of prison doors and the unlocking of missiles.

Apparently Veidt is also responsible for allowing Russia to know all of the United States military secrets due to his “Global Data Exchange Program”. 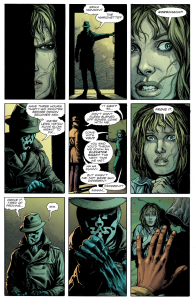 Oooh, a new character in the Watchmen universe! Erika Manson, The Marionette! Obviously a villain that at one time was put away by Rorschach, but not THIS Rorschach.

Geoff Johns based The Marionette on a Charlton Comics character “Punch and Jewelee.” We will meet the “Punch” in this villainous duo soon enough.

Less then four hours before the nukes hit. 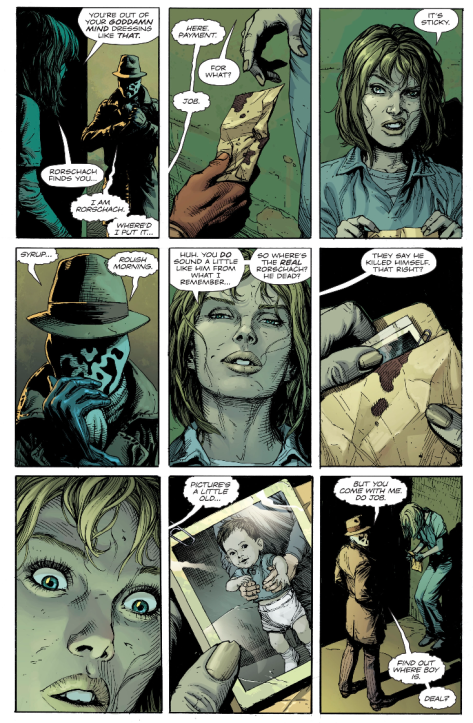 Rorschach #2 has The Marionette’s son as a hostage. That’s cold-blooded, Rorschach. 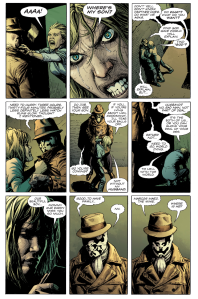 Who is Rorschach’s partner? And why are they looking to “find God”?

This “God” he is referring to is no doubt Dr. Manhattan. He can save the world from nuclear annihilation. But time is running out for the Watchmen universe. 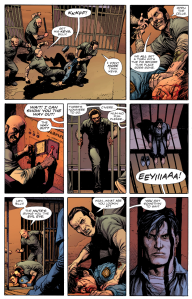 Those prisoners grab that guard and plan on taking turns to rape him. Brutal.

There’s some dude sitting in his cell watching the assault – the prisoners call him The Mute.

Billy, the-soon-to-be-living-his-short-ass-life-in-agonizing-pain-rapist-here has two “white supremacist” tattoos on his arm. The Nazi SS symbol is one of them – which I mentioned before looks like the new logo for The National News Network. 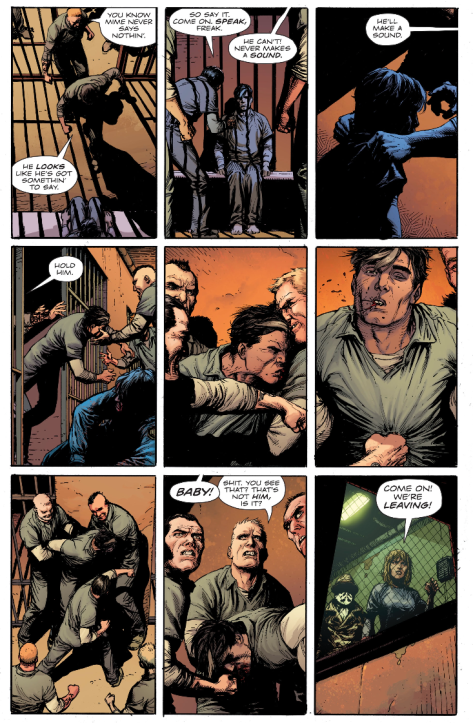 The mute’s name is The Mime – the other half of “Punch and Jewelee” – husband to the Marionette.

The Mime is getting his ass handed to him. 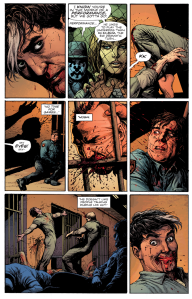 Looks like that “getting beat up” thing was just part of the plan. The Mime is just went berserker!

Is it just me, or does The Mime resemble The Joker in that last panel of page 14? 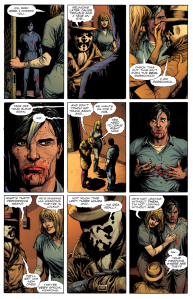 The blood splotch on The Mime’s shirt resembles the classic blood stain on The Comedian’s button. This is the only time that motif shows up in this comic that I could find.

The clock is ticking, but Rorschach has no idea what time it is. 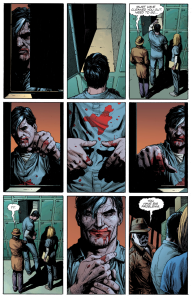 The Mime picks up his invisible weapons.

Which brings the only laugh in this bleak issue: Rorschach telling The Mime, “You have big problems.” Something about the pot and kettle comes to mind with this statement from Rorschach. 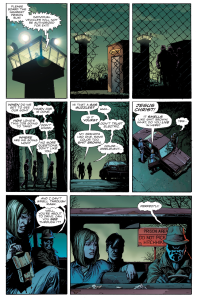 The trio casually walks out from the prison. Pretty sure the guards have other concerns on their mind.

Rorschach drives a car that takes gas. He doesn’t trust electric ones. Probably something to do with Dr. Manhattan having a hand in that.

Why does Rorschach never care about cleanliness or hygiene? 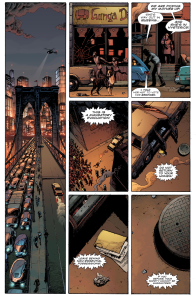 The trio make it to New York: the only people entering. The rest are high-tailing it out of there. Notice the exhaust coming out of Rorschach’s car. The other cars have no exhaust.

In panel 3 there’s a husband and wife and their child, packing up the car and leaving town. The wife says they need to pick up her mother.

I believe this is Dan and Lori, Night Owl and Silk Specter, leaving town.

Oh, and looks like Robert Redford, the actor, is now President of the United States. 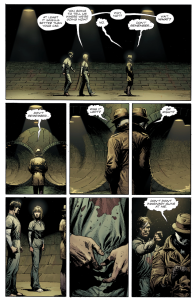 Rorschach, The Marionette, and The Mime have dropped down a manhole and walk under the streets of New York City.

Those two tunnels Rorschach stands in front off sure look an awful like the front of The Owl Ship. 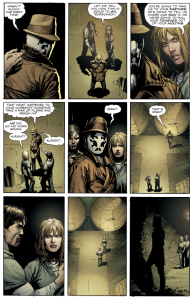 The Mime pulled his own tongue out? Dude is taking method acting to the next level.

The Mime holsters his invisible gun and follows Rorschach. I really can’t wait to know about The Mime and his origin. 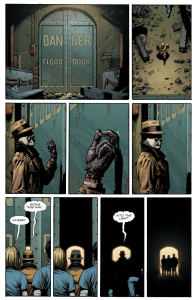 They finally make it to Jabba’s Palace door!

There’s graffiti on the right hand side of the giant door, “RR”. Rorschach’s signature. 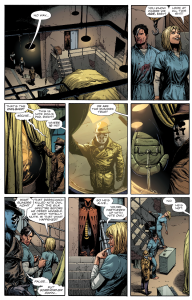 Well this place looks familiar! It’s Nite Owl’s secret lair! Last we saw this place Dan and Lori were narrowly escaping the cops that figured out their identities. So the question is, why is everything back the way it was? The Ship (Archie), Nite Owl’s suit, tools. It’s like Nite Owl has taken up residence again here.

Rorschach looks at the Owl Ship, he knows its nickname “Archie”. How does he know that? He seems to look at the ship with some sense of remembrance. Like he’s been here before.

Look upon this panel ye mighty and despair… its Ozymandias! And a new baby Bubastis, a genetically-engineered Lynx.

Rorschach corrects Ozy that he works WITH him, never for him.

I wonder why The Marionette is so important in finding Dr. Manhattan? What’s her connection? Why does Veidt need her so bad? 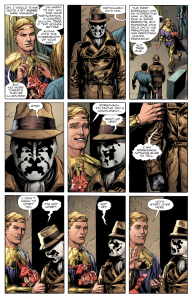 Watch the baby Lynx hiss at Rorschach and jump out of Veidt’s arms in the bottom 3 panels. 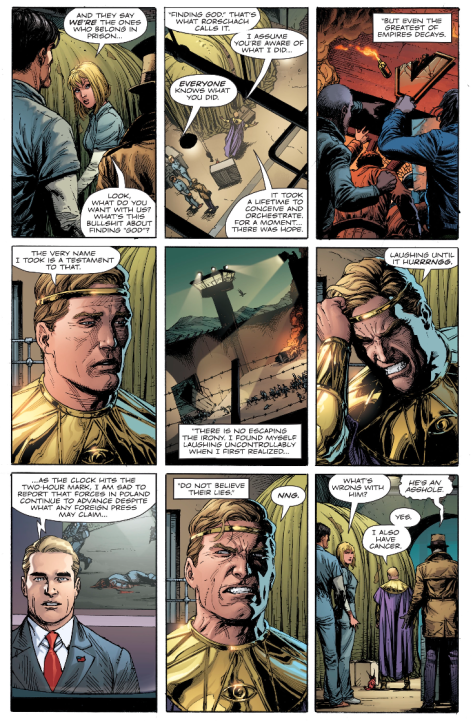 Ozymandias does indeed have cancer. A brain tumor. So the question is, does Veidt want to find Dr Manhattan to “save the world” or to save him? 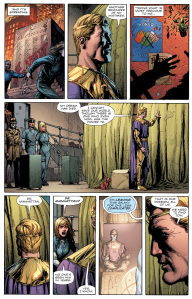 Wait I’m wrong, there’s the blood splatter motif in panel one (over the last “M” in “Memoriam”) The second one I’ve found.

How did Veidt get a brain tumor? He calls his cancer “another reminder of my mistakes.” In the original series, Veidt gave people that knew Dr Manhattan cancer. Perhaps he messed up and mishandled some radioactive material and ended up giving himself cancer.

The only flashback to the original series is on this page: where Dr Manhattan says he’s leaving to another galaxy. Wonder what galaxy he was talking about? 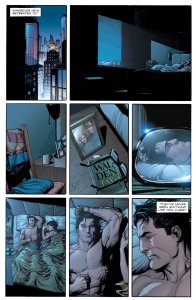 There’s the Daily Planet building. We are no longer in the Watchmen universe. We are now in Earth 0. The main universe for Superman and Batman and Wonder Woman and we all know and love.

There is Superman’s shirt hanging on the chair.

What’s that book that Superman is reading? Walden Two? Let’s check out what Wikipedia has to say…

Walden Two is controversial because its characters speak of a rejection of free will, including a rejection of the proposition that human behavior is controlled by a non-corporeal entity, such as a spirit or a soul. Walden Two embraces the proposition that the behavior of organisms, including humans, is determined by environmental variables, and that systematically altering environmental variables can generate a sociocultural system that very closely approximates utopia. 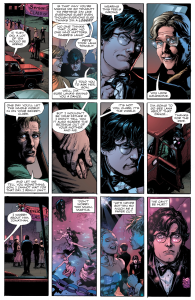 These pages deal with a dream that Clark is having about the night his Earth parents, Jonathan and Martha Kent, died.

Jonathan says something in the dream about how Clark can’t be hurt. He’s never gotten as much as a paper cut. But Clark can be hurt, he can have his heart broken by Lana who he sees dancing with another guy. 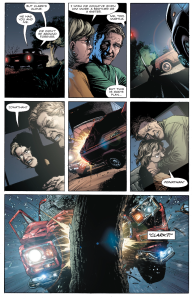 Martha says she wishes they could have given Clark more, a brother or a sister. Jonathan says, “But this is God’s plan.” God, as in Dr. Manhattan?

Yelling and the room shaking? If I was Lois, I would think twice about sleeping in the same bed as Superman.

This was Clark Kent’s first nightmare. He knows something is coming. Or is already here.