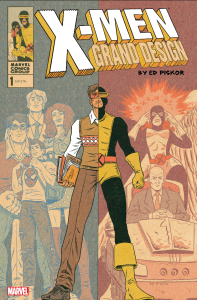 Funny that amidst the storytelling miscues and struggling sales numbers of Marvel’s latest initiative, one book slips under the radar that honestly attempts to honor the history of this beloved fictional universe, without even bothering with the Legacy trade dress. Ed Piskor, the award-winning cartoonist responsible for Hip-Hop Family Tree, now turns his attention to Marvel’s mutant family tree with X-Men: Grand Design. Piskor has taken over fifty years of X-Men comics and crafted a new thirty-year timeline of continuity, with this first issue covering the birth of Charles Xavier through the early formation of his first team.

The series is as much a harmonization of decades of storylines and origin tales as it is a fresh take on what has made this cast of characters so compelling. Obviously, much of the action in this first issue distills the early Stan Lee & Jack Kirby comics, but the chronology ties in work by other important X-scribes, including Chris Claremont and Grant Morrison. So along with classic recruitment stories of the original class, interactions with the likes of Amahl Farouk, Gabby Haller, and even Captain America are woven into the marvelous mutant tapestry.

And the execution is brilliant. My first reaction while reading this book was a flashback to the wonderful Marvel Saga from the 1980’s. That series stitched together classic panels from Marvel’s early days with original narration by Peter Sanderson to bring a young, impressionable comic book fan like myself up to speed. That book represented some of my first exposure to the likes of Jack Kirby, Steve Ditko, and John Romita, and it was instrumental in creating the obsessed librarian of superhero history that I am today. Piskor’s book is a much more intensive labor, of course, as he is writing and illustrating the entire series himself. As a result, the book is as beautiful and engaging as it is educational.

Piskor’s style mixes the edgy graininess of 60’s and 70’s underground comix, the elegant economy of modern cartoonists like Daniel Clowes and Dean Haspiel, and the obvious bombast and melodrama of Silver Age superheroes. And his extensive research is on full display in a two-page appendix in the back of the book. It’s undoubtedly an impressive undertaking, and will certainly be subject to an irregular release schedule. But if we can deal with frustrating publication delays on the normal stuff that Marvel cranks out, we can absolutely exercise some patience for this gem of a book. And, in the meantime, we’ll free up room on the bookshelf between James Sturm’s Unstable Molecules and Neil Gaiman’s 1602.