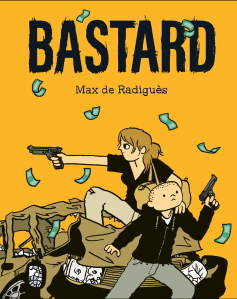 This month Fantagraphics is publishing the collected English edition of Belgian cartoonist Max de Radiguès’s Bastard. Originally serialized in a zine format, Bastard tells the story of May and her young son Eugene, accomplices in a series of recent robberies, who are desperately traveling across the U.S. while avoiding both the law as well as their double-crossing cohorts.

Crime drama has enjoyed a lasting popularity in entertainment media for decades. The comics industry’s biggest boom, one could argue, was mid-twentieth century detective rags. Seedy subcultures of organized crime make for riveting television. Everyone loves a good heist flick.

One of the things I have found most interesting in much of the crime television that has my attention of late, is the exploration of how criminality affects the family, children’s formative years in particular. On shows like Bloodline, Ozark, and Sneaky Pete, the machinations of the central protagonists often take a back seat to the effect those schemes have on the family members caught up in the act. There’s this notion of confronting our societal desensitization to crime; we love these stories of transgression, these characters who operate outside the law, the thin line that seemingly separates upstanding citizens from fugitives. But how often are we really confronted with what those anxieties do to a family? To children? The Sopranos pokes fun at it; The Wire paints a brutal reality. But neither ever really zeroed in on the kids.

All the action in Bastard takes place on the run. The inciting crimes are never seen and are barely discussed. The story is often violently intense, and de Radiguès paces his narrative beautifully. But all of that grit frames a heartbreaking story of a mother’s relationship with a son who has only ever known a life of crime. It’s the family road trip device, shot through with sympathetic truck drivers, serene off-the-grid Native Americans, and lots and lots of bullets.

Much of what endears me to Bastard is in de Radiguès’s style. His lines are economical and loose, embracing a gentle cartoon quality that belies the brutality in the panels. It’s as if Tom Hart and Paul Grist mind-melded and couldn’t decide on a crime caper or an adolescent tear-jerker, so somehow cranked out the best parts of both. In so doing, de Radiguès really asks us to consider our relationships not just with family members, but with this genre of entertainment with which so many of us are enamored.

Bastard succeeds not just as a gripping crime yarn or a quiet study of familial crises, but also as a self-examination of how much we’ve romanticized the criminal lifestyle and ignored the range of its impact. It may be easier to relate to a kid dealing with the stress of his parents’ divorce, but the stress of why do I have to stab this dude in the face, Mom? is decidedly more jarring.