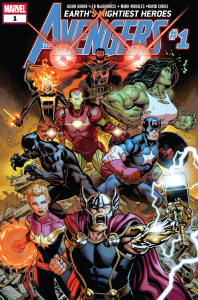 The whole world is on the brink of destruction again and only the combined forces of the greatest caped heroes can save the day. Some assembly required.

Cue the new roster of the Avengers, 2018, and they’re staring down the barrel of a very large and very old gun in the shape of the Celestial Final Host. You got your standard members like Cap and Shellhead, but neither of them are leading the charge this time around. That honor goes to the King of Shiny Things, the Cat with the Vibranium Gat, the Wakandan who needs no Palm-frondin’ – Black Panther. Seems like a promising move in new leadership especially with the added angle of the US government rejecting the Avengers as a domestic asset. A foreign national leading the Avengers?! Ooooh we’re gonna have some great issues surrounding sanctions and tariffs for sure.

The Celestials were first introduced by Jack Kirby who was inspired by the almost-definitely true theory that ancient aliens visited earth before we were smart enough to write anything down and kick-started our development. Was Kirby himself a direct descendant of a Martian genetics experiment to produce advanced illustrations of perspective and action? Ancient astronaut theorists saaaay yes. There’s a great collected timeline of this developing hypothesis through sci-fi books and comics for your further edification.

I’m a fan of the retro-cool style of these new god-like threats as well with their 70’s jagged metallic patterns and circuit board chic. Thankfully it’s the 70’s and not the 90’s or these gods would be descending with giant shoulder pads and even gianter shiny guns. Also swords probably. The 70’s still looks cool – everything but the boots. What the hell is going on with that oversized floppy boot cuff that every superhero just kinda has for some reason? What are these modeled after? Did boots come in one-size-fits-all styles where you just pulled the excess boot over itself? Thankfully these Celestials have fastened metal boots with no extra material. 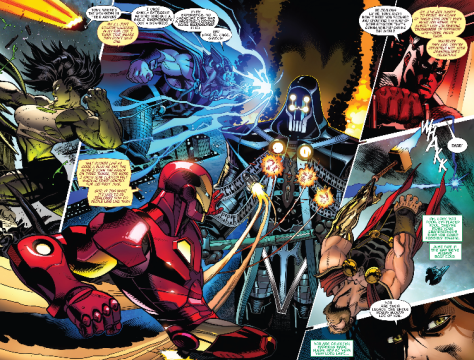 The Final Host is a clean-up squad of these Celestials who promise the utter annihilation of Earth after they seeded the planet with superhuman DNA a million years ago. That’s right, Marvel is going back a million effing years to bookend this little story. A nice round number that 7th graders everywhere included in their summer writing assignments. Sounds like the editors really do read fan mail. Because of that alien super-seed our planet was gifted with B.C.E. Avengers led by Odin and a bunch of other ancient super-being analogs. Welcome to the new team, Ghost Rider – you’re the modern incarnation of the ancient “Rider” who has used Hell’s power to torment the sinful atop whatever could bear his fiery butt. I like a little team shake-up and GR’s been blazing his own trail for a while waiting for this opportunity so he deserves a chance.

This Cro-Magnon Battalion is one of the best parts of the new series and it really opens the door for a whole round of prequels in the MCU. The readers only get a little taste but it puts the current Final Host battle into perspective. A perspective that includes a very cool discovery of a submerged celestial body that’s been stewing under the ocean waves since the original visit. Check out the first couple issues to see how they gave it a total makeover. 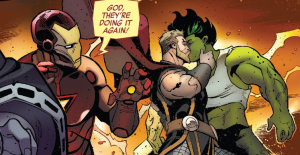 Another great angle that this series highlights is how Marvel combines lore from various cultures and religions to produce a unified mythology. We have Norse gods, Christian demons, and sorcerer supremes all intermingling to create a new history which will hopefully be misinterpreted in the far future as our species’ true origins when post-apocalyptic humans discover these “ancient texts” buried in a nerd’s basement. Glory unto you oh Stan of most high. Your prophet Allen maintained a sacred tabernacle of your teachings right next to his invaluably informative collection of small cards of people running with balls.

Anyway, I enjoyed this series enough to read through the first ten issues and haven’t been disappointed. There’s even a giant-sized love connection just starting to form.