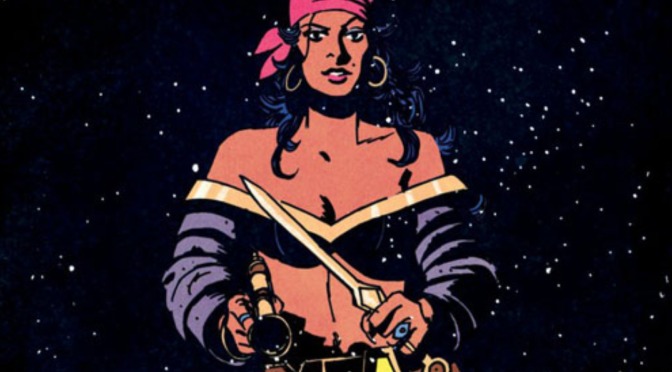 I’ll admit. I bought this book for the cover. I’m a sucker for 70’s-style space operas, and anything that reminded me of Captain Harlock and early Heavy Metal was worth a look.

Edit (4/5): I met this book’s artist,Tom Reilly, at C2E2 this year, where he was holding down a table for two conspicuously missing Hustle writer Jai Nitz for much of the weekend. Reilly was amiable, but nervous, and told me he channeled a lot of Jetsons while working on this comic. He sketched me a Vision sipping an espresso for my coffee gallery.

Later that week, Nitz was publicly accused of sexual misconduct, dating back to an incident at the University of Kansas in 2017. Other women have come forward with accusations since then. The series has been canceled and existing issues removed from digital libraries.

I feel terrible for Reilly. This was his big break and, despite being his first major work, Hustle was already a promising showcase for his style and creativity.

I wish there was some way to support Reilly, and encourage him to keep making comics, without supporting this particular book. If I knew an established writer with a good pitch, especially if it involved more robots, space swagger, and groovy aliens, I’d tell her or him to give Tom a call. Cheers, tomreillyart.com. Keep it coming.