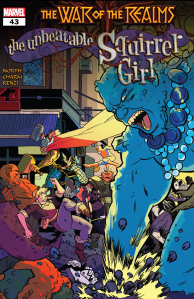 I’m always down for a Marvel summer mega-event. And War of the Realms, like a select few rack-hogging crossover blitzes before it, gets all of my attention (and money). Partly because I love what Jason Aaron has been building for years, partly because I’ve always been a fan of Marvel’s four-color spin on Norse mythology, and partly because I’m a sucker for glorious, colorful, 616-spanning bonanzas. So that means my friendly neighborhood LCS (thanks, Leef) has been instructed to pull any and all War of the Realms crossovers and tie-ins. This week, only one week removed from the official opening war trumpet, and, apparently, it’s get-ready-to-laugh time!

The two tie-ins this week are both putting the funny back in funnybooks. Or, I should say, they’re both intended to be funny. I guess. And this pair of books perfectly illustrates an unsettling trend I’m seeing in capes-n-tights titles of late. Superhero books peppered with humor are great. Gerry Duggan and Kelly Thompson are two of the first Marvel writers who come to mind when I think of a good mix of action and comedy, mixing intrigue with witty dialogue. Hell, superhero movies peppered with humor are great. The MCU has proven that. Superhero books that are, however, first and foremost humor books are a different breed. When they’re successful, they are fantastic. But when they fail… oof. I can go from eyeroll to frustration to outright rage very quickly. And too many fledgling writers are being invited to fuck up my monthly comics because, apparently, they think writing comedy is easy?

So, back to our week two War of the Realms offering. We have one tie-in series premiere that is downright embarrassing, and one crossover comic that not only does everything a humor comic should do, but it forces me to ask myself why am I not reading Squirrel-Girl on the regular?

Before this year’s C2E2, I didn’t know who the McElroys were. Yeah, I game. Ask me about by WFRP campaign some time. But I don’t listen to a ton of podcasts. I’ve heard of Adventure Zone, sure, and I bought in to the buzz when Ryan Penagos told me that getting these guys on a Marvel book was the best thing to happen since offset printing. After reading their first issue of War of the Realms: Journey into Mystery, however, I have absolutely no interest in listening to any one of their shows.

It should have been easy: a road-trip adventure in the midst of the planet-spanning chaos featuring a host of B-list heroes protecting Thor’s newly revealed baby sister (side note: dumb idea). But every g-d panel features a forced attempt at a gag or a quip, none of which could possibly be considered funny outside of a horribly narrow demographic of eleven-year-old boys and television consumers who rely on laughtracks to help them enjoy shit like Fuller House and Young Sheldon. It’s the comic book equivalent of those Teen Titans DCEU movies that I forced myself to watch last year. They even made Thori sound stupid! Unforgivable.

But let’s compare this book to Unstoppable Squirrel-Girl #43 by Ryan North and Derek Charm. The chemistry between writer and artist is fantastic, as you’d expect on a book replete with timely dialogue zingers, well-crafted sight gags, and layers of meta-humor. The page is the thing, dear players, and a simple glance at how well these two work together is on display during a conversation between Colleen and Loki, tucked into an NYC alleyway while the superheroes tackle a host of frost giants.

There is a lot of Squirrel-Girl backstory that new (or lapsed) readers might wish they’d been caught up on, but the here-and-now of Colleen & Company teleporting to Canada to deal with a northern bastion of the invading horde is easy to drop in on. It’s fun, dynamic, and, most of all, genuinely funny.