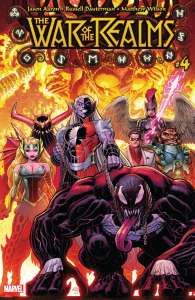 We’re less than two months in to Marvel’s big summer event, and the main title just passed its halfway point. This is usually the time when things start to go off the rails, in terms of chronology and flow, or when we start earnestly anticipating each new chapter, tie-in, and side story that develops. Or sometimes both. Secret Empire, Marvel’s wonderfully controversial event of two summers back, suffered from conflated plot events, often making the reader feel as though he or she had missed something, but still managed to push things forward in an exciting fashion. I’m still a little confused by the periphery crapola that surrounded last summer’s Infinity Countdown/Wars, but the main book was a fun, good-looking read.

So where are we with War of the Realms? Issue #4 hits stands this week and, I’m incredibly pleased to say that, for the most part, the linearity of the plot in the main title is on par with Jason Aaron’s always excellent writing and Russell Dauterman’s ever-fantastic art. With the strike teams assembled to carry out their various tasks, the action zigzags across Midgard and across the Realms as Malekith’s forces continue to lay claim to all of the continents on planet Earth. It’s a bit difficult to communicate the expansive nature of a story like this within one six-issue mini series (which is why good tie-ins and crossover are so valuable), but Aaron & Co. are doing a helluva job.

Cap’s team infiltrates Jotunheim to rescue Thor. Captain Marvel leads a badass squad against the nastiest of the invading armies. Freyja’s weird strikeforce of angry-as-hell heroes attempt to close off the Black Bifrost. Black Panther and the Agents of Wakanda defend Avengers Mountain (and the tens of thousands of evacuated New Yorkers in its ribcage). And Allfather Odin makes his long-awaited attempt at redemption. There’s a lot going on, for sure, but then again… that’s why we have all this other shit to read.

On the surface, this tie-in series by Leah Williams and Marco Castiello has all the makings of a fun-as-hell RPG scenario. In War of the Realms: Giant-Man #1, All-Mother Freyja recruits four of the Marvel U’s giant-sized supers to disguise themselves as frost giants, infiltrate newly frigid Florida, and assassinate Ymir. The only problem is that this first issue flows like an ad hoc roleplaying session too, with Williams laying down traintracks as she goes. While certainly not a must-read (and I’d be very surprised if anything that happens in this series becomes relevant to the main storyline), it’s still recommended because of the fun concept and, well, like it says on the cover: just look at these absolute units.

Another strike team one-shot, War of the Realms Strikeforce: The War Avengers #1, by Dennis Hopeless, Kim Jacinto, and Ario Anindito, focuses on Captain Marvel’s team of butt-kicking marketing-friendly rabble rousers. Yeah, Carol Danvers fronting a book with Venom and Deadpool. It’s a bit silly, but the art is fantastic and if the point is to just see these maniacs wreak havoc against trolls, giants, and goblins, then whatever. Sign me up. There’s also a little plot point that explains what Malekith is doing with that leashed symbiote on the cover of this weeks WotR #4. Recommended, but read the main book first. 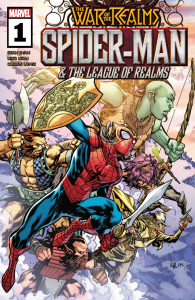 And speaking of blatant marketing ploys… War of the Realms Spider-Man: League of Realms #1, by Sean Ryan and Nico Leon, takes the fun concept of Jason Aaron’s League and makes it pretty for the comic rack by replacing the Midgard rep, Roz Solomon, with Peter Parker. It wouldn’t really even bother me that much (and there is a self-aware joke in the book that references his inclusion), if not for the fact that it complicates the linearity of the plot that I was just lauding. Spidey, who until recently had been in Jotunheim trying to free Thor, is suddenly in Africa leading the likes of Sir Ivory Honeyshot the Elf and Ud the Troll against the occupying armies of Heven. Still… this is fun and well illustrated, and, like with New Agents of Atlas, it helps broaden the scope of this world-wide conflict. Recommended but, again, read that main book first.