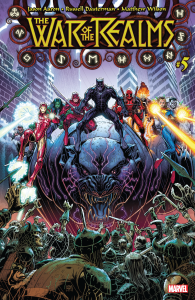 When I started this earnest effort at charting Marvel’s big summer event, my goal was to tackle, first and foremost, the readability of War of the Realms and all of its associated crossovers, tie-ins, and supplements. The idea was to see whether or not I could recapture the wonderful anticipation I used to feel with these types of stories (Civil War comes to mind most immediately), or if disjointed and confusing narratives were going to be the new norm. I haven’t always read all the tangential crap, but I’ve felt like, in most cases, I’ve consumed the majority. Despite that, gaps in storytelling from forced compression or publishing delays have really affected that experience (Civil War II, by contrast, stands out in this regard).

So then, this week, I’m reading the latest installment in the main book, War of Realms #5, the penultimate chapter in Jason Aaron and Russell Dauterman’s epic fantasy/superhero explosion. And I’m thinking… when the hell did we get to South America and what the fuck is the Enchantress doing with an army of the dead… But instead of complaining about linearity, I am treated to Doctor Strange leaning out the window of Ghost Rider’s Hell Charger, piloted by Balder the Brave, while the Sorcerer Supreme plays mailbox baseball with Asgardian zombies. Cool. I’ll buckle in. I don’t know where we’re going, but this is definitely all about the ride.

Oh, and Spider-Man is there too, obviously, kicking the shit out of a ghost. So he’s gone from the streets of Manhattan (invasion) to Avengers Mountain (evacuation) to Jotunheim (rescue operation) to Africa (militarization) to… New Nifflheim? I guess? Who cares. He’s fighting alongside giant Hel spiders and it’s pretty awesome. The rest of this issue, featuring Earth’s heroes on the offensive around the globe, is equally gorgeous and entertaining. Obviously essential.

Now, back to our weekly War of the Realms rundown. Four more books to label as required, recommended, or refuse.

Tony Stark: Iron Man #12 by the guest creative team of Gail Simone and Paolo Villanelli takes place before War of the Realms even begins (so, yes, the info in the solicits is pretty misleading). Based on that fact alone, it’s hardly required reading to appreciate and understand the main story. But… if you had been reading the superhero-meets-swords-&-sandals saga and thinking to yourself that the one thing we’re missing is a dragon, well then… this book is for you. Malekith, being a dark elf, wants to get the Man clad in baneful Iron off the board, so he enlists a creature notorious for its love of gold. Borderline recommended, but it wouldn’t kill you to save four bucks either. 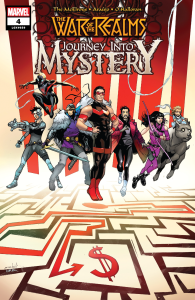 God I hate this book. Issue number 4 of War of the Realms: Journey Into Mystery is another half-assed collection of one-liners and failed gags built around one mildly creative core concept. In this case, the road trippers decide to rob a casino that happens to be hosting a convention for supervillain henchmen. Could be fun, but instead it’s garbage. Yes, I’m still reading every issue. I’m committed (even after my LCS guy asked me again “are you sure want me to order every book related to the War of the Realms?”) And I’m going to keep complaining. At some point, this will allow me to delve deeper into my problems with the current state of mainstream comics and how the Marvel Method no longer works in the Twitter era of clickbait, notice-me posts, and forced attempts at immediate humor. Yes, there is a problem here. We may truly be circling the drain as a society, and my comics somehow hold the key to uncovering that truth. Stay tuned. So very skippable, unless, like me, you’re trying to put your finger on what makes this (and comics like it) so very terrible (and don’t mind the dent on your wallet in the name of sociological research). 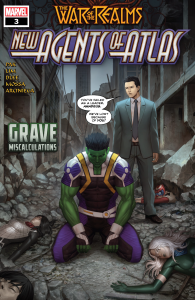 I appreciate the fact that the bulk of action taking place in Asia during this Midgard-spanning conflict is being focused into this series. War of the Realms: New Agents of Atlas #3, by Greg Pak and Gang Hyuk Lim does an even better job of fleshing out these new international entries into Marvel’s superhero pantheon AND they do it without seeming like a forced attempt at a video game tie-in (which, admittedly, I was a little bit concerned with initially). As much as I love seeing Russell Dauterman draw layouts drenched in fire, he can’t tell the whole story of Queen Sindr’s assault on the Pacific, it’s nice having this team expand the narrative. Still very recommended.

This new series by Kelly Thompson has been fantastic. In fact, it has alleviated any and all concerns I’ve had about not having a decent Carol Danvers book since DeConnick’s run. Captain Marvel #6, the first of this two-part WotR tie-in, isn’t just an excellent continuation of the series, it’s one of the best takes on event crossovers that I’ve ever read. Thompson, with guest artist Annapaola Martello (Carmen Carnero, who has quickly become one of my favorite comics artists, will return after this tie-in), focuses on the aforementioned South American battleground. Black Widow, Doctor Strange, and Captain Marvel have their sights set on the leader of the undead army, the Enchantress. There’s a marvelous twist in this book that underscores Thompson’s ability to take a plot point — in this case one mandated by the event editors — and spin it into something engaging, entertaining, and clever. I’m marking this essential because, as with last week’s Fantastic Four, you should be reading Captain Marvel anyway. 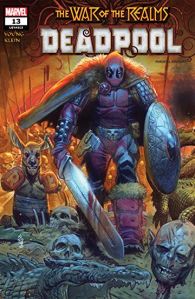 Full disclosure — just as with Venom, I’m not a big Deadpool fan. And while Cates and Stegman have been solely responsible for getting me read the new Venom series, there hasn’t been a creative team on a regularly running Deadpool book in years (maybe ever?) that has managed the same feat (the only series I enjoyed in recent memory being the surprising Black Panther vs. Deadpool by Kibblesmith and Lopez-Ortiz). But I picked up Deadpool #13 by Skottie Young and Nic Klein because of its WotR tie-in. Various books during this event have taken us to locations around the world to showcase effectively the global impact of Malekith’s division of Midgard. So it’s nice to see that someone is dealing with the trolls’ dominion of Australia, but because it’s this particular character and because no one really gives a crap about the trolls or the land down under… I’m labeling this guy skippable.