Once again, I’m foregoing the weekly new release column to focus on a different kind of release: the 2019 San Diego Comic Con variant. With the convention officially kicking off tomorrow, here’s a list of five special releases that are on my radar. These aren’t necessarily the most rare exclusives or even overly valuable variants. These just happen to be five that have piqued my interest. 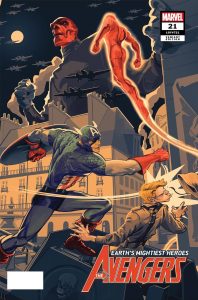 Avengers #21 – Mondo Variant (Marvel)
I’m running out of wall space, which is why I’m probably going to pass on Rich Kelly’s “Golden Age of Marvel Comics” print from Mondo. Luckily, however, Marvel has taken that fantastic design and used it as a variant cover for the latest issue of Avengers. This particular issue of Aaron and McGuinness’s series has some War of the Realms fallout and features the latest iteration of Phil Coulson’s Squadron Supreme. 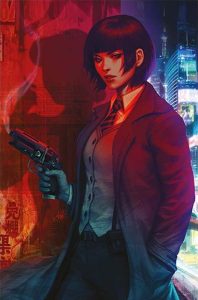 Blade Runner 2019 #1 – Artgerm Exclusive Virgin Variant (Titan Entertainment)
Stanley “Artgerm” Lau pretty much does one thing, and he does it really well. His half-body digital paintings are regularly featured as variants for the big two publishers, but I’m excited to see this cover exclusive being offered for Titan’s new Blade Runner series. The book is co-scripted by Mike Johnson, who has done a nice job on another licensed sci-fi property, IDW’s Star Trek, and, along with Michael Green, he’ll be telling new stories in neo-noir Los Angeles.

Die Vol.1: Fantasy Heartbreaker – SDCC 2019 Variant (Previews)
You won’t find this at the Image booth. This exclusive version of the first collection of Kieron Gillen and Stephanie Hans’s “goth Jumanji” tale of horror and suspense is over at the Previews World station. It’s limited to 1,500 copies, and it’s a great book, and I want it. The solicits have described the book as “a pitch-black fantasy where a group of forty-something adults have to deal with the returning, unearthly horror they only just survived as teenage role-players.”

Justice League #28 Convention Exclusive (Graphitti Designs)
These Graphitti foil variants of DC comics aren’t anything new (and, in fact, the way they recycle existing variant covers and lure me in with a silvery sheen should be more upsetting), but they’re still pretty cool. The latest issue of JL has a Terry Dodson cover variant with the con-exclusive treatment. I plan on finally getting Dodson to sign something for me this year, and I think I’d like it to be one of these guys. 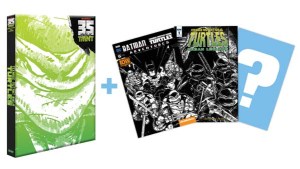 Teenage Mutant Ninja Turtles 35th Anniversary – Box Set Bonus Bundle (IDW)
From the solicit: “Celebrate the 35th anniversary of the Teenage Mutant Ninja Turtles, with this special bundle containing a shrinkwrapped 35th Anniversary Box Set of the original Mirage stories reprinted in magazine size, along with a few FREE extra Kevin Eastman variant covers of various Turtle titles!” I’m not sure that this is must-have, especially since the boxset seems like it will be offered separately to the general market, but I have a soft spot for the comics that introduced me to the direct market world (R.I.P. Gamemasters) and I sorely regret selling my original Mirage issues of TMNT numbers 1 and 2 back in high school. This bundle is sure to bring back a flood of conflicting emotions.