I’m not lazy by any means. I’m swamped. “Idle time” isn’t what it once was and finding shit to write about every week has its challenges. That said, my experimental effort at a blog entry title that, much like a spontaneous tweet accompanied by an image or two, can communicate everything I need should, also, force me to blather on introspectively in the most blog-like of fashions. Which is what I just did.

But maybe I should expand a bit while we’re here? Last week’s House of X was everything the Marvel hype machine made it out to be: big, beautiful, and portentous of exciting things for our long-maligned mutant friends. Ever since news broke that he was returning to Marvel, I have felt strongly that the company really needed Jonathan Hickman. Reading the first two issues of these interconnected titles, and I’m reminded how much the X-Men in particular needed him.

X-Men continuity is some nonsense.

There are no rules here. There is no order. Just random unconnected gibberish.

I just wrote 5000 words on when someone can, and cannot, utter the phrase “Omega Level”

This is a job I have in the United States of America.

It’s magnificent, ambitious stuff, but, then again, that’s why Hickman. His sci-fi-forward approach to stories was wonderfully suited to rejuvenating the Fantastic Four and, despite my initial skepticism, resulted in one of the most engrossing Avengers epics of all time. Now, with sights set on Marvel’s mutants, he is once again going all big ideas and grandiose scope. 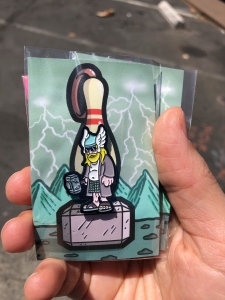 Yeah, now about that pin! I can’t explain exactly why I like shiny enamel pins so much. I was never big into buttons. I sport a few of these on backpacks and on my jean jacket but the vast majority of my treasured pins (many of which come home with us after various conventions) live in a Chris Ware tin lunchbox in my study. It’s somewhat inexplicable. At least rengstorff — one of the people I blame for this pin fetish — has a pin display going on one of his walls. And he will cheerfully narrate for you what each of them represents, where he got it, and/or why he loves it. Mine just sit in a box for now.

Matt Ritchie is the guy responsible for this wonderful “The Big Thorbowski” pin. He’s a local artist whose vibrant pop culture-inspired artwork can be found at fine stores and festivals around the Bay Area. Next time you’re in Oakland, check out Cape and Cowl Comics (two-time finalists for the Eisner Spirit of Comics Retailer award!) and pick up this, or one of their many other fine exclusive enamel pins. My lunchbox is full of ’em.