The revolution may not be televised, but nothing has stopped it from being splashed and sequenced, stapled and folded, colored and squarebound. It’s marvelous credit to the medium that comics of a revolutionary bent have evolved from the field of underground pamphlets and zines into thoughtful, well-written, mass-produced monthlies and graphic novels. It’s also a little frightening to realize how much our contemporary social consciousness has fueled this surge of four-color rebellion. Superheroes, who, like it or not, have become synonymous with the medium, achieved their Golden Age ascension at the height of World War II, when the enemy was without (interestingly, subsequent to the War, those selfsame heroes dwindled in popularity, losing ground to crime, romance, and western rags). But the enemy within, particularly in the last decade, has never felt more menacing. For a mainstream publisher like Marvel to unveil a summer-long event like Secret Empire, in which our own country is beset by a subversive fascist force literally wearing the American flag seems like a testament to how wide the fires of resistance have spread.

Scarlet #1, by Brian Michael Bendis and Alex Maleev, is the latest incendiary response to societal unrest. The book continues the creator-owned saga begun under Marvel’s Icon Imprint, with a new number one to kick-off the arrival of Bendis’s Jinxworld line at DC. This first issue of the new volume does a decent job catching new readers up to speed… but it may do a better job at selling the uninitiated on the merits of those first two volumes (DC is also publishing new editions of those collections).

END_OF_DOCUMENT_TOKEN_TO_BE_REPLACED 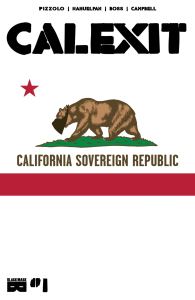 Yeah, I get it. We live in a bubble. Despite feeling like I don’t need to hear it anymore, I nonetheless am amused and bewildered when I come across the kneejerk closed-minded right-wing reactions to even the vaguest of protestations. Case in point: the first three Amazon reviews for the digital edition of CALEXIT, the latest subversive gem from Black Mask Comics, courtesy of Matteo Pizzolo and Amancay Nahuelpan. If they had called this book about organized resistance to an oppressive, fascist America something like, I don’t know, Secret Empire, maybe some folks would have bothered reading it before ranting. Instead, bozos like DonkeyKong777 and Lochstar chime in with insightful bon mots like “progressive bull corn” and “liberal wet dream.” This wasn’t thrown together as reactionary propaganda; the truth is, Pizzolo and Nahuelpan started working on CALEXIT long before reality started eerily mirroring the fictional dystopia they were crafting for in the book.

These guys also know the truth about California. Because they, like us, actually live here. And it’s far less of a bubble than most of the world realizes. So when the book’s creators stopped to think about what might actually happen if the majority of Californians rebelled against an authoritarian regime, they realized that the state itself would likely become dangerously divided. As Pizzolo states in his afterword, “from my point of view, any secession would likely lead to a civil war within California before the military could even get their boots on… Political passion/rage is as bipartisan in California as it is in the rest of the country.”

END_OF_DOCUMENT_TOKEN_TO_BE_REPLACED

Like music, movies, and ice cream flavors, there’s a comic book for everyone. Here are the FCBD offerings I’m most excited about, including the Previews solicitation information. END_OF_DOCUMENT_TOKEN_TO_BE_REPLACED

IDW Publishing announced, last October, that they would be adding two more beloved toy properties to their stable, pulling both Mego’s Micronauts and Parker Brothers’ ROM out of limbo and onto the comic book shelves. Or, to be fair, back onto the comic book shelves. Like IDW’s G.I. Joe and Transformers properties, both Micronauts and ROM: Spaceknight were fan-favorite Marvel comic books in the late 70’s and early 80’s. And, as opposed to some of the lesser-known action figure lines that earned shoddy cross-promotional series (think Sectaurs or Crystar), the Micronauts and ROM books were as fun, if not as successful, as their Hasbro brethren.

I wasn’t lucky enough to have any of those sweet “plastic and die-cast metal” toys of my own, being a little too young when they were popular, but I loved the comic book, and especially loved when my favorite Marvel heroes crossed over into the Microverse and vice-versa. Some of those original comic book Micronauts, not under the toy license, have remained in Marvel’s ownership and have survived into modern continuity, like the Guardian of Galaxy, Bug. The rest of those stalwart defenders of the sub-atomic realm, as well as the tyrant Baron Karza and his evil minions, would need to wait years to see their adventures continue in a monthly series.

From reading the afterword, it’s clear that if anyone other than Cullen Bunn was tapped to write this series, we may have had a problem. His lifelong passion for the Micronauts will, we hope, save the IDW series from being the third stalled attempt at rekindling that Micromagic. Bunn’s words are paired with the crisp, vibrant art of David Baldeón, and the whole package is a characteristically beautiful IDW release. I can only imagine how excited the bloggers of the excellently named Blog for ROM Fans Who Aren’t Dicks are for the Free Comic Book Day premiere of that new book. Now if only they could get cracking on Shogun Warriors. 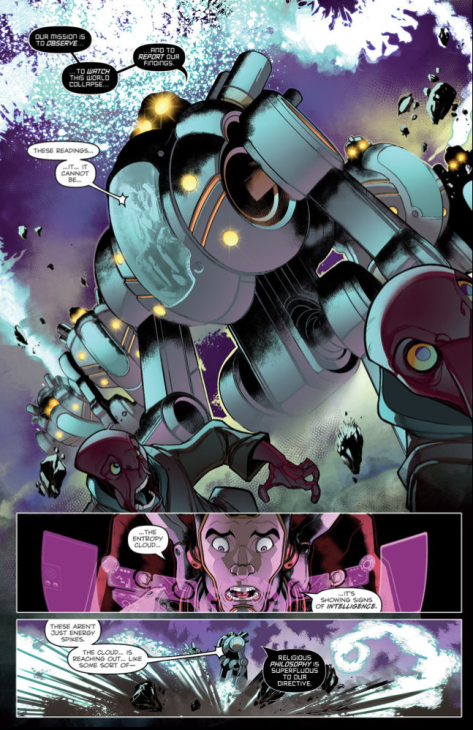