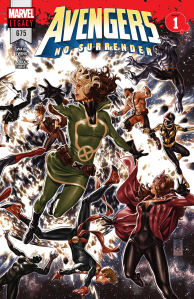 Lost amid the tumult of retailer backlash, public relations nightmares, and declining sales, Marvel Comics has been soldiering forth with its Legacy initiative, boldly releasing books that apparently only a select few of us want to read. And although the bulk of the work on Avengers: No Surrender had been completed well before Axel Alonso was fired and shortsighted readers across the country demanded “recognizable superheroes,” I rather like to think that Mark Waid, Al Ewing, and Jim Zub got together and said: “You know what? Fuck those guys. They want a white Captain America and boy Thor, they can buy a ticket to the movies.” Then they pulled a shit-load of B-listers together for a weekly Avengers event. 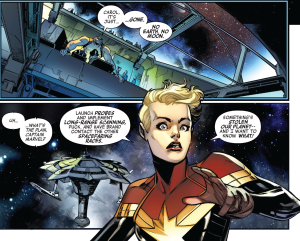 Avengers #675 marks the first issue in the No Surrender event, and, with the coordinated cancellation of the surprisingly entertaining Uncanny Avengers and charmingly goofy U.S.Avengers, this is the only regular title for Earth’s Mightiest for the time-being. So, naturally, we’ll get a team with a three-headed leader of Sam Wilson, Roberto DaCosta, and Rogue. Take that, MCU.

It gets better. The premise of this storyline is that the planet has been stolen by an unknown force (and will soon be the battleground for two teams of villainous cosmic heavyweights), and the majority of the Avengers (that is, guys most people have heard of) are trapped in stasis. That leaves the avenging duties to folks like Hercules, Brother Voodoo, Cannonball, and, I shit you not, Living Lightning.