I’ll confess that, initially, I wasn’t overly excited about the forthcoming Tron sequel, despite fond childhood memories of both the original film and the video game.  Then I saw the full-length trailer and caught my first glimpse of “the hot doctor from House” squeezed into her neon-accented black futurefabric.

There’s something to be said about costuming.  Take Carrie Fisher, whose otherwise simply cute-and-feisty Princess Leia took a turn into Sexual Fantasy momument thanks to a metal bikini and Jabba’s leash.  Or a less obvious example, from the other side of the coin: Bridget Moynahan should have made this list, but every outfit she parades out in I. Robot makes her look like the frumpy sidekick whose job it is to accentuate the allure of the more attractive leading lady.  Except there is no more attractive leading lady.  Just Will Smith perpetually shirtless and showering without a curtain. No wonder this movie tanked.

Back to my point — Olivia Wilde, I now know your name.  “Ryan’s edgy girlfriend from The O.C.” no longer.  And once I’ve seen the movie in its entirety, you’ll even be eligible to make my…

She was pretty cute  in Ghost World, and genuinely attractive in Lost In Translation, but ho-lee shee-it did this little career detour catch me offguard.  Scarlett Johansson, sex symbol?  Match Point served notice and The Island stranded prior perceptions forevermore.  And if I ever compiled a Top 5 Hottest Cinematic Superheroines, she’d make that list as well for being the best part of Iron Man II.

One of the first movies we owned (on Betamax, no less), was this colorfully campy adaptation of Alex Raymond’s classic comic strip.  I have distinct memories of watching and re-watching this film with the sole purpose of building up my fledgling adolescent courage. A self-imposed test of will, as it were.  There were two specific scenes for which I steeled myself: the first was Flash jabbing his hand into a hissing stump of wood where dwelt some wicked beastie.  That always scared the hell out of me.  The second was Princess Aura twisting her red bodysuited self all over our hero in the cockpit of a spacecraft, making sweet, sweet love to his control panel in the process.

Italian actress Ornella Muti, looking like she stepped right out of a Boris Vallejo painting, was my first childhood fantasy. She was a femme fatale for a new generation, one replacing shadowy streetcorners with floating cities and nine millimeters with laser rifles.  But smoking eyes and a seductive foreign accent make villains dangerously attractive in any era. 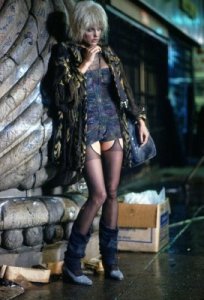 I think it might have been the raccoon eyes.  Or maybe all the jumping around.  The fact that she’s a robot, a dangerous robot? I didn’t see this movie until much, much later in life, and early Hannah impressions were all of the Splash and Roxanne variety.  College, I think.  Philip K. Dick blah blah greatest writers of the twentieth century… Ridley Scott, so important… whatever.  Look at that girl move! All her own stunts, I understand.  Nice job, Daryl.  Almost makes me forgive the creepy eyepatched role in Kill Bill.  The eyepatch, incidentally, is not an attractive accessory. Angelina Jolie’s one legitimate shot (Cyborg 2 ain’t cutting it) at making this list was ruined by the damn thing.  What’s hiding behind that piece of fabric?  A grody hole most likely.  Blech.

J.J. Abrams is a hero to so many people.  I, however, was never among the Felicity faithful,  Lost legionnaires, or Cloverfield cultists.  But when he rejuvenated the Star Trek franchise, I wanted to marry the guy.  The most stereotypically nerd-associative universe in pop culture history was not only pretty cool again, it was amazing. And everybody was digging it.  He’s like a Peter Jackson for the sci-fi set.  And J.J.’s Arwen, his Liv Tyler, is the incomparable Zoe Saldana.  She hits all the key points of sci-fi sexiness: hot outfits, techno-spanking pseudo-wizardry, and the ability to kick ass at a moment’s notice. In fact, you want her to kick your ass.  And talk about versatility: Zoe was even attractive as one of those blue things in Avatar. More genre films, please.  Keep this up, and you’re liable to challenge the number one spot on this list.

She’s the Queen of Science Fiction Beauties.  The Goddess of the Smoldering Eyes, Devilishly Grinning Angel of Yesterday’s Tomorrows. Science fact: there’s a fine line between memorable mystique and typecast for eternity.  But when you’re as insanely hot as Milla Jovavich and embrace the opportunity to get futuristically dangerous in as many roles as possible, from Resident Evil to Ultraviolet, you’ve earned the right to be accepted as plausible fiction, and your status atop any list of this sort should be all but guaranteed. Thermal bandages around Leeloo’s orange-haired frame is one of the sexiest images on film, in any genre.