Here are the video games I played in 2010 with mini-reviews.

Possibly the best four player cooperative game I have ever played. But players have to watch out for each other, or else they will end up bouncing off their team members’ heads and knocking them into pits. The difficulty curve works well, starting easy, but by the end the game is extremely difficult. 5/5

Definitely the best free/downloadable PC game I have ever played.  It’s a run and jump cave exploration platformer with 16 levels, pixely graphics and catchy chip-music.  The cave layout is randomly generated every time and there is a lot to discover.  When you first start playing this game you’re going to die a lot, but the pleasure comes from knowing how to avoid that trap/monster/layout next time. There are a lot of powerups, weapons and useful items you can dig up, purchase or steal from cave-dwelling shop keeps. Originally made by just one guy, an X-Box Indie Arcade version of Spelunky is in the works. 5/5

Amazing level designs that often play with gravity, time and music.  It’s more difficult than Super Mario Galaxy 1. When I rode Yoshi for the first time in this game I realized how extremely complicated the controls were. I had the nun-chuck in one hand and the Wii remote in the other. I was using buttons on both hands, the control stick with the nun-chuck, shaking the Wii remote to attack, and pointing the remote at the screen to control Yoshi’s tongue. Just exercising the coordination and motor skills to control this game makes it fun. 5/5 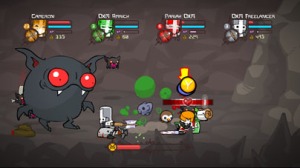 Four-player cooperative side scrolling beat ‘em up.  Playing with three friends in this challenging and bizarre game was a very good time. The hand drawn flash animation is like playing a cartoon, and the enemies, bosses and situations were often funny. 4/5

An inexpensive X-Box Indie Arcade title with four-player cooperation. The levels take place on a single screen, and the goal is to fight off all the monsters, build up your fortress and prevent the princess from getting killed. With 8-bit graphics and a chiptune soundtrack, we enjoyed multiple playthroughs on different difficulties. 4/5

A first-person exploration game with no defined goal. Every material in the game world is cube-shaped and identical in size, which the player can destroy and gather resources from. Through combining different materials, tools like shovels, axes and picks can be created. All materials that the player collects can be used to build structures, cube by cube. There are a lot of items to craft, and a handful of enemy types to evade or attack once the night falls.  Whether you decide to build a deep underground lair or a tall citadel, much of the enjoyment of this game is from building. This is another game originally made by one person. Did I mention there’s a multiplayer mode? 4/5 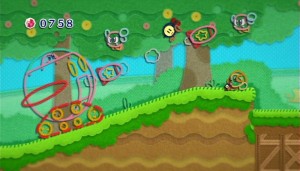 A childish, but nonetheless fun, platforming game with graphics that resemble fabrics, and two-player coop. The cutscenes play just like an episode of Thomas the Tank engine, but the gameplay features imaginatively designed levels and lots of vehicles, minigames and apartment decoration. 4/5

This is the older, tougher platforming brother of Kirby. Again, two-player coop, but having a second player makes the game harder. There are a lot of secret areas to discover and collectibles to find. The gameplay is very similar to the original Donkey Kong Countries for the SNES, with some new abilities and enhanced graphics. 4/5 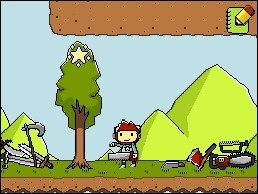 This is the DS game where you solve puzzles by typing in what you want. There are a lot of levels, and the solution could be anything that enables you to collect the star, for instance maybe a fan, a rope or a ninja. The game recognizes most nouns, and it’s fun to discover which items are useful. However this innovative gameplay doesn’t make up for the poor movement controls, confusing user interface and repetitive music. 2/5