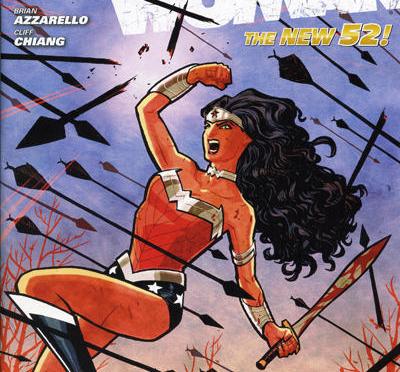 I cannot believe the Idle Time brass has dragged me into this new 52 mess.  I read about one comic book a year, and that is usually one of the collected story lines in one big book.  I haven’t read any of the other books in the new 52 series, so I have no perspective why this one is #3 or how it stacks up to the other 51.   My only history with Wonder Woman is through the Lynda Carter television series.

Other than thinking Wonder Woman was the most beautiful woman in the world, I can only remember some shit about an invisible jet that she could fly with her mind, her taking her lasso and roping the bad guys into telling the truth, deflecting bullets and insults with her giant bangles, and that damn tiara that she would throw like a boomerang. 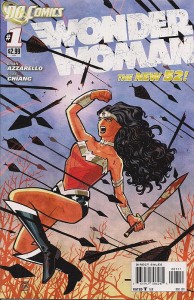 This new reboot of Wonder Woman tackles all kinds of issues the modern everywoman deals with.  First, Wonder Woman always thought she had a normal childhood, forged from clay like Saruman’s Uruk Hai, and that her mother loved her little claybaby so much that the gods chose to animate her.  She leaves Paradise Island because she was so different from the other Amazons, and begins living a fabulous life in the big city.  All this is turned upside down when some little white-trash girl, Zola, appears in her bedroom because some chicken-footed dude gave her a portkey so that she may escape a cruel death by two crazed centaurs.  Wonder Woman isn’t afraid; she takes the key and returns to Zola’s house and lays waste to those hoofed bitches.

Come to find out, Zola is carrying a Zeusbaby.  At this point in the story, I started thinking this shit is right out of Jerry Springer: “Are you my baby daddy?”  It gets worse when Wonder Woman finds out that she isn’t actually an Uruk Hai, but that she is also a Zeusbaby!  Her mother decided the claybaby story was a little more palatable than the demigod business.  Wonder Woman is a little upset with mommy, so she, Chickenfoot, and Zola leave Paradise Island.

The story becomes a little familiar.  We’ve seen countless movies where everyone must protect the supernatural unborn child from the wrath of gods and demons.  Zeus is missing, and there is a power play afoot to assume the throne.  So, nothing new is going on here.

The artwork is…  I must confess that I don’t really concentrate too much on the images when I read a comic book.  I sometimes gloss right over them as if they were just silhouettes.  I know that is defeating the purpose of this medium.  I read comic books as if they were a shooting script for the movie that’s about to be made.  I think most comic book artists would jump at the chance to be filmmakers anyway.  Brian Azzarello and Cliff Chiang have crafted an extremely well paced script.  They hit the ground running and keep things interesting with well-placed editing choices.  I think it’ll make a fine film.