A lot of people think Yoko Ono broke up The Beatles, but after watching a butt load of 1970’s interviews from John, George, and Ringo (god bless YouTube) I’ve come to the conclusion that it was Paul that broke the band up. After years of telling them what to play and how to play it, the other dudes couldn’t stand Paul anymore and got fed up. John had quit the band in 1969 but kept quiet about it at Paul’s request. Then a few months later in a total dick move, Paul, after recording his solo album, announces publicly that he is quitting The Beatles – like it was his idea (and to help the sales of his new record). Whatta d-bag! 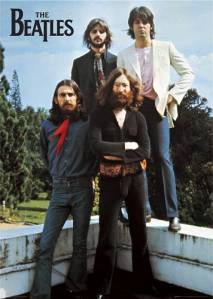 There are 4 divisions for the songs:

These are songs from the first 3 Beatles albums –Please Please Me, With The Beatles, and Hard Days Night.

These are songs from the next 3 Beatles albums –Beatles For Sale, Help, and Rubber Soul

These are songs from the middle 3 Beatles albums – Revolver, Sgt Peppers, and Magical Mystery Tour

These are songs from the last 3 Beatles albums – The Beatles (The White Album), Abbey Road, and Let It Be

After each Division crowns one song as the winner, those songs will battle each other in the final fight to determine which Beatles song is the BEST! Enough talk, let’s get to the battles!

CLICK HERE FOR THE SECOND ROUND BOUT: THE CLEAN CUT YEARS

CLICK HERE FOR THE SECOND ROUND BOUT: THE SHAGGY YEARS

CLICK HERE FOR THE SECOND ROUND BOUT: THE MUSTACHE YEARS

I’ve Got a Feeling