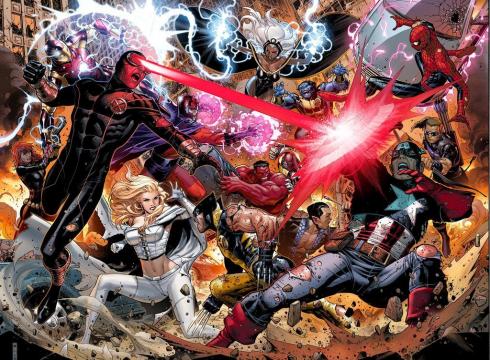 Marvel’s billing this as the biggest event in comic book history. And here at The Institute, the only thing we love more than superheroes is superhype. We’re pretty excited. In fact, for the next six months, Avengers vs. X-Men figures to dominate a good deal of real estate on this here website in a way the goddam Beatles could only dream of. In fact, that might make for an interesting battle itself: will The Institute house more pictures of mutant mayhem or Liverpudlian pop stars?* 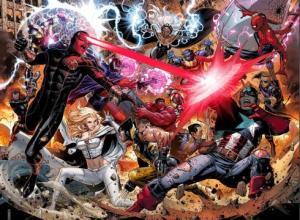 To properly celebrate this auspicious occasion, Idle Time, in collaboration with Sacramento’s Comics & Collectibles, is sponsoring a contest with a degree of complexity and inanity completely commensurate with the average comic book storyline. The faculty here could no sooner decide on an appropriate contest than we could agree on a side to support. Clearly, the smart money is on the Avengers, but there are those among our collective still blindly allied to the misguided mutant agenda. That’s why we created two different contests, with two completely different ways to win!

Bear with me, and I’ll try to make this explanation only slightly less verbose than the typical RPG player’s manual.

First, get your hands on one of these: AvX Ballot. You can download the pdf, or you can pick up a copy in person at Comics & Collectibles. Don’t waste any time, True Believer! After you’ve finished reading Avengers vs. X-Men #0 (out this week!), submit that completed form to the store, or email a copy to mdigino@instituteofidletime.com. The deadline is 6:00 PM on Tuesday, April 3rd. Then, to celebrate the real event kick-off, come back to the shop starting at 8:00 for an AvX Launch Party! Pick up your first issue a day early! Pick up some variant covers! Pick a fight! 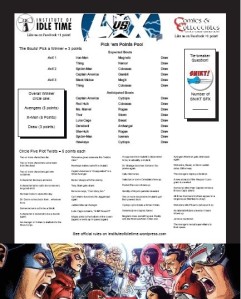 So… here’s how it works. Side one is the Pick ‘Em Points Pool. But this isn’t like the simple weekly NFL-style pool that netted your grandmother ten bucks last November. You have some important decisions to make. Start with the instructions in the upper corners. Like The Institute of Idle Time on Facebook, and you’ve automatically started the contest with a point. Do the same for Comics & Collectibles, and you’re two points in the black.

On to the bouts! These are the individual one-on-one battles being featured or suggested by Marvel’s hype machine. The first six battles have been formally announced, and they will be detailed in the first three issues of the tie-in series, AvX: Vs. For each of those face-offs, circle an Avenger, an X-Man, or “draw” if you think it’ll end without a clear victor. Keep in mind that a panel of knowledgeable judges will be voting on the outcome, and all decisions of these judges are final. Each time you’re right, you score an additional three points.

Below these “Expected Bouts” are “Anticipated Bouts.” These are one-on-one melees we’re anticipating based on ad teasers, cover images, or just fervent fanboy crossed fingers. Circle a result for each of these bouts as well. Judges will weigh in the first time any of these match-ups occur. So even if Captain America and Cyclops go at it in every single installment of this 12-issue biweekly blitz, we’re only concerned with that first throw-down (and the first issue, based on the previews, should provide the judges with some decision-making immediately). If the fight never happens, no points will be awarded (“no line” for those of you well-versed in sports gambling). These bouts are also worth three points for correct predictions.

To the left of the bouts is a box in which you can circle your pick for the overall winner. If you take a stand and vote Avengers or X-Men, you’re in position to earn five points at the event’s conclusion. If you go with the boring (but all-too frequent) nobody-really-wins option (draw), you stand to earn just three points. So pick a side! 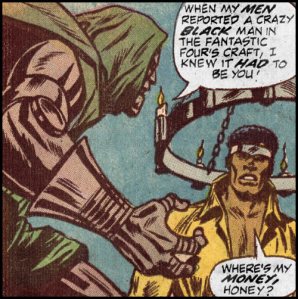 The bottom of side one is where things get really interesting. Because the best part of one of these summer-long comic book blockbusters is the ridiculous number of silly plot twists and clichéd eventualities, we’re awarding five points each for accurate prognostications. There are forty “twists” listed at the bottom of the form; circle up to five of them. These points will be awarded as soon as the event occurs, even if it is later disproven (Tony Stark gets hammered in issue two. Just kidding! It was ginger ale, he explains in issue three… You’re still getting five points.) Once again, the judges will make all plot twist determinations.

Got all that? So, in a perfect world, there are a total of 77 possible points that can be earned over the course of the event. What happens in case of a tie? That’s what that little Wolverine claw box is for. Write down the number of times you think the “snikt” sound effect will be scripted into any issue involved in the event. We’ll use this number as a tiebreaker. And, yes, someone will be tasked with counting every last one of those snikts. There may even be a running SniktCounter posted in the store.

There will be a first-place prize and runner-up prize for the Pick ‘Em Points Pool. 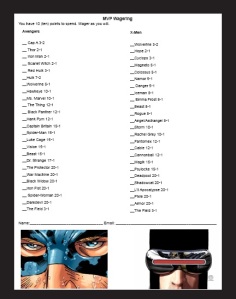 Now flip the ballot over for some real fun.

At the conclusion of the event, your trusty group of judges will convene and vote, MLB-style, on the Most Valuable Players for each side of the conflict. You are given ten “points” to wager however you see fit anywhere on the ballot. Wager whole numbers only.

For those of you a little less familiar with sports gambling, or sports in general (ghostmann), allow me to be a little more explicit.

Captain America and Wolverine are atop each team’s list because they’re favored to win. As such, the payoff is the weakest. You need to wager two points just to earn three. The longshots are further down the column. Someone like Daredevil, for example. His odds are 20-1, which means wagering one point earns you twenty.

Example A: The Holy Bee (who is not, rest assured, part of the judges panel) feels really strongly about Captain America and Cable earning the two MVP trophies. He puts four points down on Cap, and four points down on Cable. Then, just for fun, he puts one down on Wolverine (in the X-Men column), and one on The Field in the Avengers column. The Field refers to anyone not specifically listed on the ballot. At the end of the event, the judges determine that the two winners are Wiccan for the Avengers and Wolverine for the X-Men. He picked both winners! He scores 3 points for Wiccan, since he wagered 1 point on The Field at 3-1 odds. He scores 1.5 points for Wolverine since he wagered 1 point at 3-2 odds. That’s a total of 4.5 points.

Example B: PiedPica puts all her faith in Cap and Wolvie. She bets five points on Cap, and five points on Wolverine atop the X-Men column. Given the same trophy results, she earns 7.5 points for Wolverine with those 5 points wagered at 3-2 odds. Sorry, Holy Bee. You’re playing for second place.

Example C: Lazybear thinks this is the dumbest idea ever, and doesn’t want to see weekly capes-n-tights postings on the site let alone read a single issue of this mess… so he just throws all ten of his points down on The Avengers Field to shut us up. When Wiccan’s name gets called… that fool just netted 30 points, becoming the man to beat.

Please remember to write your name and email address on side two.

As with side one, there will be a first place and runner-up prize for the MVP Wagering. 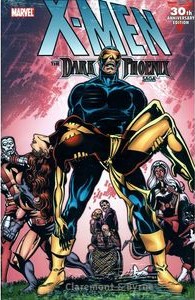 What prizes you ask?  Besides the honor and acclaim of being acknowledged as a champion predictor of comic book chicanery, the first place winners in each contest will win their choice of a hardcover collection of one of our favorite X-Men and Avengers stories from a selection that includes The Dark Phoenix Saga, House of M, and Young Avengers: The Children’s Crusade. They will also walk away with a variant copy of Avengers vs. X-Men #1.

The runners-up in each contest will win a variant copy of Avengers vs. X-Men #1 and an AvX poster.

But wait! There’s more! At the aforementioned Launch Party, one randomly selected entrant among all the participants present will win a super-cool exclusive AvX goodie!

Got all that? No? Then just ask Gene. He’ll be more than happy to explain everything to you in person.

*Just kidding, ghostmann. Please don’t take that as a challenge.

One thought on “Avengers vs X-Men: The Idle Time Contest!”